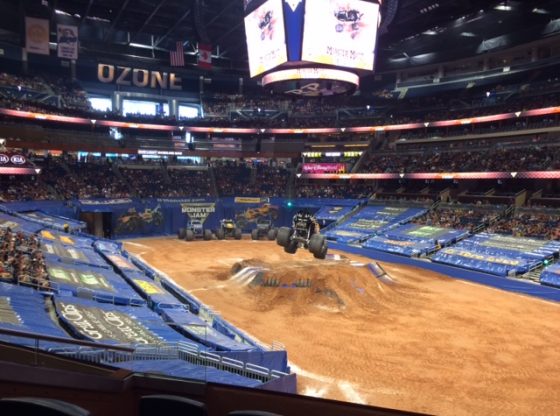 ORLANDO — If you were at the Amway Center on Aug. 18, you joined a boisterous crowd ready to see trucks flipping over mounds of sand — yes, that’s right, inside the Amway arena — during the continuously popular sporting event known simply as Monster Jam.

Crowds packed into the arena to see Scooby Doo, Gravedigger and other trucks strut their stuff, even if it did seem a tad bit dusty with all that imported sand and dirty flying around.

Monster Jam, which has traditionally been held in Orlando at Camping World Stadium, is heading for a reunion with Orlando’s 60,000-seat downtown stadium, although for a special event that has city leaders seeing major dollar signs in their future.

Monster Jam Host Mitchell Rains noted at the start of a recent press conference that he had “a larger than life announcement” to make.

“As you can see from the Monster Jam trucks on the field, the city of Orlando and Monster Jam have an epic announcement for 2019,” Rains said.

What Is Monster Jam All About?

For the uninitiated, Monster Jam brings together world-class male and female athletes to compete in championship events on the same perfectly engineered dirt tracks, designed to push and test their state-of-the-art trucks to the limit.

This live motorsport tour, operated by Feld Entertainment under the umbrella of the U.S. Hot Rod Association, features racing and freestyle competitions by monster trucks, and it’s has been held every year since 1992.

Kenneth Field, chairman and CEO of Field Entertainment, said he was excited to be bringing the World Finals to Orlando.

“We are thrilled to announce the next step in the evolution of the Monster Jam franchise as we embark on a new chapter,” he said. “Feld Entertainment will bring our marquee event to world class destinations across the U.S., starting here in Orlando with our 20th Anniversary of Monster Jam World Finals.”

Why Orlando? Field said the city’s reputation for family entertainment was a big plus.

“Orlando is a city that is not only a premier sports destination, but it’s a city synonymous with family entertainment,” he said. “We’re excited to make Monster Jam World Finals accessible to even more fans, with the anticipation of over 50,000 fans from around the world converging on The City Beautiful.”

Monster Jam World Finals XX will be held at Camping World Stadium on May 10-11, 2019. This event will feature brand new competition formats, including an elevated starting line above the seats and seven championship crowning moments.

What Are City Leader Saying About This Event?

Not surprisingly, Orlando and Orange County municipal leaders are rolling out the welcome matt for Monster Jam athletes and fans alike, anticipating that this event will draw huge crowds to Orlando.

“Bringing Monster Jam World Finals to Camping World Stadium next year is a big deal for Orlando and further proof we are one of the country’s premier sports event destinations,” said Orlando Mayor Buddy Dyer. “We’re grateful for our longstanding partnership with Feld Entertainment and can’t wait to see our stadium packed with fans of Monster Jam’s premier event.”

Orlando is also home to the Orlando Magic basketball team, the Solar Bears ice hockey team, and the Orlando City Lions play at their own downtown soccer stadium.

The fact that this is an event that appeals to people of all ages was also cited by county leaders.

“We are thrilled to host Monster Jam World Finals in Central Florida,” said Orange County Mayor Teresa Jacobs. “There’s simply no place like Orlando when it comes to a family and fan-friendly environment. We welcome fans from around the world to our great community for this action-packed event.”

Jason Siegel, CEO of the Central Florida Sports Commission, added that it was great news for Orlando to have “the opportunity to welcome one of their premier events to Camping World Stadium, and we know their fans and athletes will have a tremendous experience here in Central Florida.”

When Monster Jam came to Amway on Aug. 18, the crowds pouring into the stadium included a lot of adults — with their kids. At times it seemed like there were more children than adults in the arena.

In quite a few instances, the kids looked even more excited and enthusiastic to be there than the parents.

With Orlando’s reputation for hosting major theme parks that represent ideal family friendly entertainment, Monster Jam only adds to that, as an event that combines sports action with humor in a way that kids and the adults alike can enjoy and root for

And now residents of Greater Orlando can take advantage of seeing the Monster Jam World Finals in their own back yard. But whereas the Amway Center seats 18,000, Camping World Stadium will up the ante to 60,000.