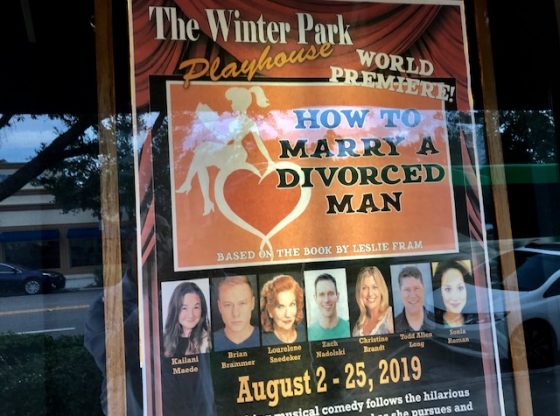 WINTER PARK — It sure seems like Layla Diamond has it all. She’s been promoted editor of her music magazine, and is living in one of the world’s greatest cultural centers, New York City.

But Layla has a couple of problems. First, she hasn’t found the right man yet — and she doesn’t want to end up like her somewhat batty mother, an actress who had a thing for divorced men and always seemed to have, well, rather complicated and drama-intense personal relationships.

Smart, ambitious, and self-assured, successful business exec Layla is pretty confident she’s going to avoid that treacherous path, find an amazing guy, and live happily ever after — and boy is she wrong!

One of the great pleasures of watching the new Winter Park Playhouse production of the musical How To Marry A Divorced Man is observing Layla, an instantly likable character played with captivating comedic skill by Christine Brandt, charge into each situation with the complete confidence that she can master every dilemma that comes her way — and to see how badly she messes it all up. It isn’t that Layla isn’t smart enough to anticipate the problems she’ll create; it’s that she’s overconfident about her intelligence, and thinks she can always stay one step ahead of each impending catastrophe. We can quickly see how badly she’s misjudged her abilities.

What is the Play How To Marry A Divorced Man?

How To Marry A Divorced Man is having its world premiere at the Playhouse, following a staged reading of the musical during the Playhouse’s second annual Florida Festival of New Musicals, where it was the audience “top pick,” and is getting a full run now through Aug. 25. It’s easy to see why this musical — based on the book by Leslie Fram, with music by Clare Cooper and book and lyrics by Bryan D. Leys — charmed audiences as a staged reading. Comical shows about smart people who get themselves in a whole heaping lot of trouble can be nonstop fun when they’re done right, and this one is no exception.

Layla’s problems start early in the show, when she discovers Bo, a Texas boy who is handsome, a successful sports agent, and available. Great! Well, he is divorced, but Layla shrugs that off. At first, anyway.

The problems start mounting when Bo’s spoiled and uncommonly nasty daughter Molly (a vicious comedic delight as played by Kailani Brianna Maeda, who will have you gnashing you teeth when she posts one of her fake nicey-nice smiles). Confronting the little terror doesn’t help Layla much (in one of the play’s funniest moments, Layla tries to bond with Molly by asking her about school and teachers, and the child responds with text messages), but she becomes convinced that Molly would like her parents to get back together again. So Layla makes the first of many colossal blunders: deciding to go “undercover” to meet Bo’s ex Glenda, a former Joan Jett-style rocker who now runs a clothing boutique. Naturally, Layla has no plans to admit that she’s dating Glenda’s ex.

But she also discovers that she likes Glenda, a street smart, no-nonsense lady. And before you can say Oops, Layla is pretending to be someone other than Layla the lady dating Glenda’s ex, and she’s offering to pick up Glenda’s son Kevin when he gets in trouble at school, and then she’s pretending to be a lawyer named Erin once she learns the city is refusing to give Glenda’s shop a historical designation. That gives her the opportunity to meet Whitman, a bureaucrat who works at the city’s Landmark Preservation Office. See, Layla has this idea that maybe she can match up Whitman and Glenda, so then Glenda won’t be interested in reuniting with Bo anymore …

Does This new Musical Work?

How To Marry A Divorced Man is an engagingly zippy and fast-paced comedy musical, with some very fun and clever songs (the Glenda-Layla showdown “I’m Not You” is a real highlight). Layla’s attempts to pull the wool over everybody’s eyes comes crashing down at the start of the second act, and then we follow how she picks up the pieces. The play isn’t afraid to be mighty sentimental at times which in my view is a compliment. We all need somebody to love, the show seems to be suggesting, and oh the actions we’ll take to get it.

On stage constantly, Brandt is a real tour de force as the demolition derby known as Layla, and her comedic timing is a pure joy to watch. But she also gets an enormous boost from the rest of the cast.

Sonia Roman is a real delight as the ex rocker who settles into motherhood and child rearing, but still has the feisty spirit you’d expect from a past rock performer. Todd Allen Long is a scene stealer as the nerdy Whitman, who mistakes Erin — er, Layla’s repeat visits for amorous affection and starts to think he’s a real Casanova with the ladies (would anyone working in a Landmark Preservation Office seem likely to be a Valentino?)

Zach Nadolski as Bo, Brian Brammer as his son Kevin and Lourelene Snedeker as Layla’s mom Grace round out a superb cast, not only for their hilarious performances but also their vocal talent as well. This farce about the complications of romance in 2019 is the ideal escapist summer fun for theater goers.

Roy Alan, the Playhouse’s artistic director and the director of this rollicking play, noted that “An integral part of The Winter Park Playhouse mission is to produce and develop new musicals. Producing a brand new musical on its way to New York is very exciting, and we’re incredibly proud to be the first theatre to develop and produce How To Marry a Divorced Man.” We’re all lucky here in Central Florida that the Playhouse is serving to help nurture new shows like this one.

When Can You See This Show?

How To Marry A Divorced Man is being performed on Friday and Saturday evenings at 7:30, Thursday and Saturday matinee performances at 2 p.m. and select Friday and Sunday matinees at 2. Ticket prices are $45 for evening shows, $42 senior evenings, $36 matinees, $20 preview performances, and $20 tickets for students, active military and theatrical industry professionals. Student rush “$10@10” offers $10 tickets (for students 25 years and younger) are available 10 minutes prior to a performance when seats are available.