Mad Cow Theatre Gears Up for its Black & White Bash 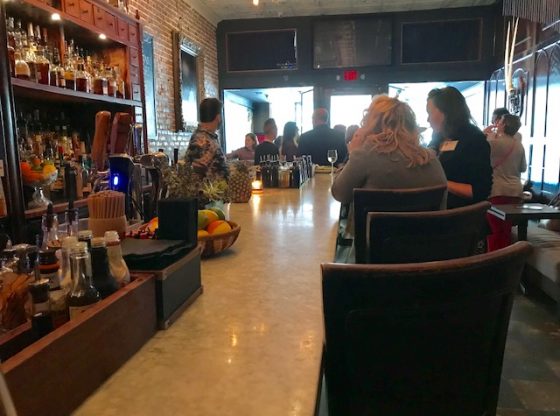 ORLANDO — At a local pub in downtown Orlando on Wednesday night, people gathered for drinks, a hors d’oeuvre spread and, by the front door, a reading from an upcoming play, “Top Girls,” which is coming to Mad Cow Theatre on March 29.

In fact, it was Mad Cow Theatre that organized this leadership bash at The Courtesy, the craft cocktail bar at 114 N. Orange Ave. in downtown Orlando, to spread the word not just about their upcoming production of the play by Caryl Churchill, but also about another upcoming event: their 5th annual Black & White Bash, the top fundraising event for the theater at 54 W. Church St.

The theater’s goal: to encourage community participation and support for this event, which remains a crucial part of the annual funding for Mad Cow’s operations.

“Only 50 percent of the fees at Mad Cow is covered by ticket sales,” said Laura Schumacher, a member of Mad Cow’s Black & White Bash Steering Committee. “All of the rest has to be covered by donations.”

So Mad Cow organized the leadership bash to bring people together, and to help spread the word about the fundraiser coming up on Friday, May 10 at The Citrus Club, 255 S. Orange Ave., starting at 6 p.m.

What Happened at the Leadership Bash?

“We’re delighted to have you all here tonight,” said Mitzi Maxwell, the executive director of Mad Cow Theatre, while noting that the theater itself is just a few blocks away, and that they remain committed to providing Central Florida with first rate live productions.

“Every show is hand made,” Maxwell said. “It’s not a show brought in from somewhere else. It’s all hand made by us.”

As an example of that, Maxwell noted that their next production would be Top Girls, which runs from March 29 to April 21. Directed by Tony Simotes, the play focuses on Marlene, who is celebrating her promotion to managing director of the Top Girls Employment Agency by throwing a dinner party for a group of women.

Simotes, who attended the leadership bash, encouraged everyone to book their tickets now.

“This play is really wonderful,” he said. Written in the early 1980s, he noted that Churchill “catapults us into the next level of female historicity.”

There was a reading from the play, while Simotes added that “It’s been terrific to be a part of a cast that’s all women. Come and see it, it’s a testament to what Mad Cow stands for. The play is very smart, as they say, and very well written. Come see it early — and then come back and see it again and again.”

What is the Black & White Bash?

Simotes also encouraged everyone to get tickets for the Black & White Bash, noting that the success of this major fundraiser helps keep Mad Cow in business.

“Without the bash, the season wouldn’t happen,” he said.

“We are hoping that we have some generous people here tonight,” Schmacher said. “We think about Mad Cow as a family, a place where you can go to enjoy live theater. And right now, one of our biggest needs is for sponsorship.”

Anyone interested in becoming a sponsor for this event, or donating items for the auction, can call Erica Bush, Mad Cow’s development and events manager, at 407-297-8788 Ext. 6, or email her at ericab@madcowtheatre.com.

The Works of Firelei Baez Coming to the Mennello
The Winter Park Playhouse Honors Old Hollywood in “What A Glorious Feeling!: