Lake Eola’s new show lights up downtown, as the fountain lights swing to the music.

ORLANDO – The lights illuminate the entire body of water, as the three levels of the Lake Eola Fountain start with purple lights decked along the upper level, and the color green blanketing the larger section below.
Only very slowly do those colors change, as purple turns to yellow lights, and below it, to red. The colors shift so slowly that people walking through the park after dark might not at first notice it.
And then … the street lights near the edge of the lake, which contain loudspeakers, bring the fountain to an entirely new level – and bring the park to vibrant life.
It starts with a recorded greeting from Mayor Buddy Dyer, welcoming city residents and visitors alike to the park, a centerpiece of Orlando’s revitalized downtown.
“The most significant enhancement is our new state-of-the-art fountain,” the mayor says, as the lights on the fountain in the middle of the lake continue to shift color, from red to green, from yellow to blue.
“On behalf of the city of Orlando, we thank you for coming to Lake Eola Park and we hope you enjoy the show,” the mayor’s voice can be heard saying. And then the Jazz sounds of the “King of Swing” Benny Goodman can be heard, and it happens: the fountain lights begin to shift in tune with the music, choreographed along with the songs, which include some Jazz, a little disco, a taste of jitterbug.
As it does, pedestrians can stop and sit on a park bench, and many do, relaxing and watching the music and light show, as that visual display of multi-colored lights on the fountain march in lockstep with the songs being played over the loudspeaker, and with the view of downtown Orlando surrounding them in the background.
The fountain that dates back to the 1950s has once again become a draw for people in downtown, and the centerpiece of the lake. The fountain suffered electrical and mechanical problems in the summer of 2009 when it was struck by a lightning bolt, but is now benefitting from improvements and upgrades made by the city, said Cassandra Anne Lafser, public information officer for the Office of the Mayor and the City of Orlando.

“The upgrades and the renovations to the fountain allowed us to be able to do this,” she said of the new music and light shows.
Starting Oct. 24, daily jazz shows began to run at 8 p.m. and 9:30 p.m. featuring a choreographed water, light and sound show for people visiting Lake Eola Park.
On Saturday, Nov. 12 in honor of Veterans Day — and on some future holidays — there will be a patriotic water, light and sound show in place of the regular Jazz show. The shows are four minutes and 35 seconds long.
Construction of the fountain was completed in 1957, when it was known as the Centennial Fountain – and was unveiled to mark the 100th anniversary of the naming of Orlando.

It was renamed the Linton E. Allen Memorial Fountain in 1965, a tribute to the local businessman who had been inspired by similar fountains he had seen in Europe, and believed Orlando should have one as well.
In late August 2009, the fountain was struck by lighting and was left inoperable. Dyer announced in October 2009 that the city would repair the fountain, replace its cracked plastic skin, and install a state-of-the-art system of lights and water jets. The fountain was re-dedicated and resumed operation this past summer on July 4, during the Fireworks at the Fountain Independence Day event.
On Oct. 24, Dyer appeared at the Walt Disney Amphitheater to unveil the new light show.
The park is often teeming with activity at night, with walkers, joggers, people with dogs on leashes, couples strolling arm in arm, and families with children crowding the walkways.
When the music show ends, the lights continue to change, slowly, on the fountain’s three levels, and without the music, there is only the gentle sound of the water gushing from the water jets at the top of the fountain.

Osceola prepares its new Museum of Military History for a grand opening next year.
An unsafe light in Davenport? Residents of one local development say it’s even led to fatalities. 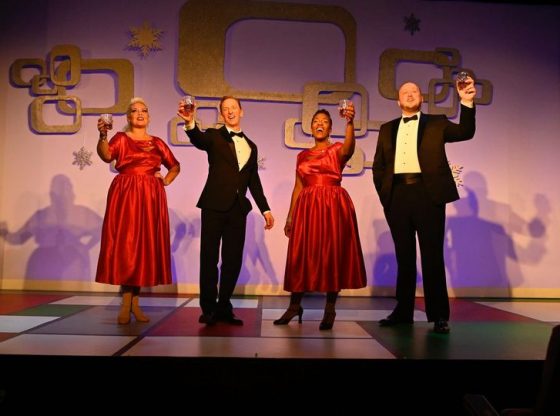 The Holidays Just Got Brighter…

Get Ready for the Florida…