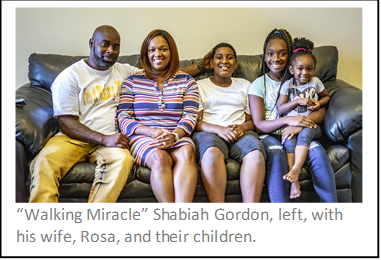 CLERMONT – A Lake County man owes his life to members of the Lake County EMS who kept him alive by performing CPR for, astonishingly, more than 40 minutes.

Shabiah Gordon experienced a near-death encounter on the morning of Feb. 24, when his wife Rosa Gordon noticed that her husband, who is 39, wasn’t breathing normally as he was sleeping. Rosa tried unsuccessfully to wake up her husband. When she couldn’t, she called 911.

And what happened next for her husband, who hadn’t reported any previous health issues, is being viewed as both a miracle and a tribute to the county’s EMS team.

“I could not be more proud of our staff for not only embodying the Office of EMS values but for handling this rare incident and showing that when passion and proper training come together, miracles can happen,” said Office of EMS Director Jerry Smith. “I believe that this call had the positive outcome that it did due to our team members being adequately prepared to handle this type of situation. The Office of EMS is happy that Mr. Gordon can continue making memories with his family.”

How Was Shabiah Gordon’s Life Saved?

Together, six Lake County first responders from the Lake County Office of Emergency Medical Services and Clermont Fire Department were able to save Shabiah’s life after tirelessly and continuously performing CPR for more than 40 minutes.

After Rosa Gordon called 911, first responders quickly arrived to help the father of four, who was in cardiac and respiratory arrest.

“Relying on their training and experience, the crews administered resuscitative efforts to Gordon,” noted Elisha Pappacoda, director of the Lake County Office of Communications. “But each crew member was determined to continue until they could get a pulse on the patient and transport him to Orlando Health South Lake Hospital.”

It worked. After spending two weeks in the intensive care unit, Shabiah Gordon was able to return to his wife and children, having regained his full neurological functions, “thanks to the unwavering dedication of the professionals on duty that day,” Pappacoda noted.

Shabiah Gordon has since declared himself a “walking miracle” and added that he now considers the Office of EMS and Clermont Fire Department staff to be a part of his extended family.

He acknowledged owing his life to them, thanks to their persistence in getting his heart to beat again.

“From my family, from my church members, everybody, we thank them so much for everything,” he said, adding, “for not giving up.”

What’s Been The Local Reaction? 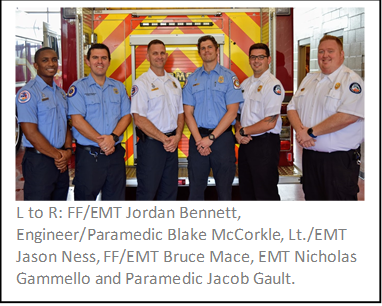 Clermont Fire Chief Carle Bishop said this is actually a daily occurrence for his men, who are well trained in dealing with medical emergencies like this one.

“These guys go at it every day and work hard and hone their skills to be some of the best in the nation,” Bishop said. “Not a week goes by that we don’t get recognition for a life saved. But this case was not typical. It’s probably the longest they’ve worked on someone and had a positive outcome. We’re very proud of them.”

As the Centers for Disease Control notes, Cardiopulmonary resuscitation (CPR) is an emergency procedure that can save lives when someone’s heart stops or they’re no longer breathing, and they are in cardiac arrest. That’s when the heart can’t pump blood to the rest of the body, including the brain and lungs. Without medical treatment, death can happen in minutes.

CPR uses chest compressions to mimic how the heart pumps and this helps keep blood flowing throughout the body. If CPR is performed within the first few minutes of cardiac arrest, it can double or triple a person’s chances of survival.

The Lake County Office of Communications also released a video of Shabiah Gordon telling his story, which can be seen here.