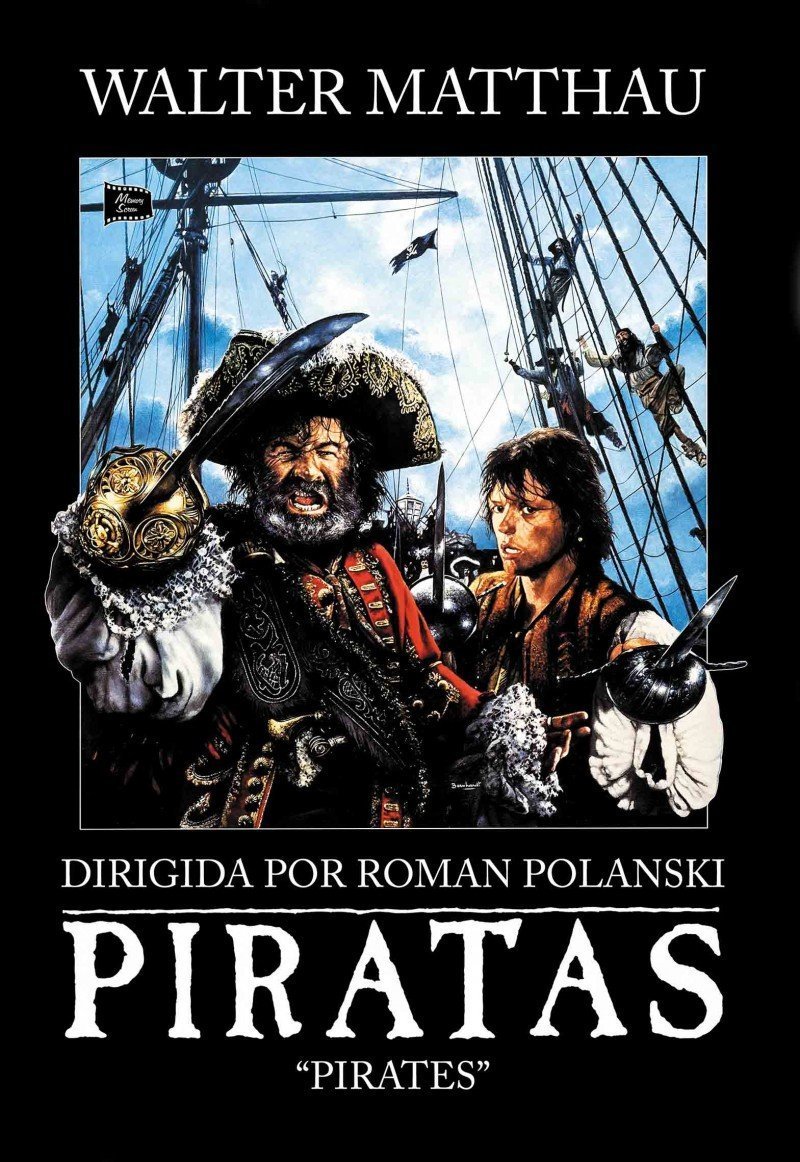 Editor’s Note: July 18 1986 is the anniversary of the release of Roman Polanski’s movie Pirates. Freeline Media takes a look back at a film that bombed when it first opened; has it aged well?

Roman Polanski’s 1986 movie “Pirates” is generally considered to be a great director’s least regarded film – the one that comes in dead last when his directorial output is ranked from best to worst.

Having received some of the most razor-slashing and hostile reviews of any Polanski movie back in 1986, and being a box office flop as well, “Pirates” is the only Polanski movie that has not been released on DVD in the United States, although it did get released on VHS back in the 1980s.

Films that earn reputations as cinematic misfires (bombs) are sometimes worth a second look decades later, to see how they’ve aged. After having watched “Pirates” on a recent afternoon, it was easy to spot some of the film’s virtues: the spectacular beauty of the locations in Tunisia where the movie was filmed; the rousing score by the first-rate French composer Phillippe Sarde (who did similarly excellent scores for Polanski’s “The Tenant” and “Tess”); the costumes by Anthony Powell that earned “Pirates” an Academy Award nomination; and an underrated comedic lead performance by Walter Matthau, aided by Damien Thomas as his chief rival and Roy Kinnear in a hilarious cameo.

So would it be safe to say that “Pirates” is an undiscovered gem that never deserved all those nasty hold-the-nose reviews in the summer of 1986?

Well, not quite. “Gem” is perhaps too strong a word. But I would argue that “Pirates” deserves another look because it is grievously misunderstood.

“Pirates” is one of only six Polanski movies to receive Academy Award nominations – but the others, including Best Picture nominees like “Chinatown,” “Tess” and “The Pianist” (as well as Best Adapted Screenplay nominee “Rosemary’s Baby”) are among Polanski’s greatest films, still considered cinematic masterpieces. “Pirates,” nominated for Best Costume Design, is the only one to have otherwise been written off by the critics and audiences alike.

There are other Polanski films that have opened to largely hostile reviews on their first run in movie theaters, though, that have since been rediscovered, including his 1976 movie “The Tenant,” which has come to be considered a classic of the horror genre, and “Macbeth,” which got re-released on DVD and Blu Ray by The Criterion Collection in September to highly enthusiastic reviews.

“Pirates” may not be headed for that kind of acclaim, though again, the reasons why have more to do with what the film is not, rather than what it actually is.

“Pirates” tells the story of Captain Thomas Bartholomew Red, a pirate who has lost his leg in battle – and his ship. As the movie opens, he’s adrift on a raft, starving to death, as sharks swarm around him. His only companion is Frog, his loyal

sidekick.
They eventually drift toward a Spanish galleon ship and are taken aboard, where they become galley slaves – and they also discover the ship harbors Aztec treasures, most notably a golden throne. Red successfully plots a mutiny so he can take over the ship and steal the throne, and takes the Spanish officers prisoner. They sail to an island where Red hopes to sell his prisoners for a tidy sum; but when he and his men have too much to drink in celebration, the Spaniards are able to escape and recapture the ship, golden throne and all, and they set off for the port of Maracaibo. Red plots to sail to Maracaibo and steal back the throne – at great risk to his life.

The plot sounds like a classic pirate adventure, full of excitement, sword fights, beautiful maidens and suspenseful intrigue. Considering that Polanski said he was inspired to write the script (with longtime collaborator Gerard Brach) after riding the Pirates of the Caribbean ride at Disneyland, audiences probably expected this movie to be the one thing it isn’t – wholesome, the kind of family-oriented action and swashbuckling saga that it’s safe to take the kids to. In fact, this movie is hardly an adventure at all, despite the rivalry between the pirate Red and the Spaniards, or the numerous sword fights that take place on the ship Neptune. It’s the film’s main ingredient – humor – that turned off audiences and critics alike.

Perhaps because Polanski was ahead of his time. What he created wasn’t a fun boy’s adventure story, but a movie set in the picturesque atmosphere in Tunisia, where the beautiful scenery masks the bleak and downbeat existential fable within it. Before watching “Pirates,” it may be worth noting that Polanski was raised in Poland, where he suffered under both the Nazi onslaught and later, the Soviet domination that lasted for decades. Polanski’s mother and sister died in concentration camps. Polanski was shot at by a Nazi soldier. He and the rest of the nation faced all the horrors that both the Soviets and the Nazis could throw at them.

It could be that Polanski made a movie that expertly documents one thing: Polish humor. It laughs at human misery, at humiliation, at cruelty and punishment – not necessary to endorse them, but rather from the perspective of saying if life is going to be this vicious, you might as well laugh at it rather than let it destroy you. Polanski is also Jewish, and this kind of dark humor is considered a tradition within the Jewish community as well.

“Pirates” is a textbook illustration of this concept, as it plumbs humor in exceptionally grim, even grotesque, ways. Adrift on that raft, Captain Red is so starved that he decides cannibalism is acceptable – and attempts to eat the Frog. Later, when he plots to stage a mutiny, Red kills a rat and dumps it in the stew pot to infuriate the other slaves onboard. After the Spanish guards quell the mutiny, Red and Frog are taken to the Spaniard’s dining quarters – where the rat is cut in half, and they are ordered to eat it. Polanski’s camera dwells on the sight of Red and the Frog struggling to digest a boiled rat.

Later, when Red arrives on the island, he discovers the criminal merchant Dutch taking a bath – so Red proceeds to urinate into the bathtub. But that’s nothing compared to when he sneaks into the bedroom of the governor of Maracaibo, who can’t get out of bed because his foot is suffering from gout. To force the governor to arrange for Red to make off with the golden throne, Red proceeds to bite on the man’s gout-infested toe. Watching Matthau sink his teeth into a diseased toe, you’re left wondering whether to laugh, or throw up. Get the idea?

We also get to see the ship’s captain given a vinegar enema, the governor’s niece nearly raped by pirates, and a prominent Spanish lawyer who had been taken prisoner and had his tongue cut off. No wonder audiences expecting good clean fun couldn’t get into a movie filled with gross-out gags and a decidedly bleak outlook.

On the other hand, that may be why “Pirates” is worth rediscovering on its own terms. Forget comparisons to Disney’s “Pirates of the Caribbean” or those old Errol Flynn movies from the 1950s. “Pirates” could perhaps be better appreciated as the front-runner to movies like “The Hangover,” that take pitch-black humor and laughing at otherwise horrible situations to new (or is it low?) heights.

At the end of “Pirates,” Red and the Frog are back where they started – lost out in sea on a raft – only this time they have food, wine, and the golden throne. But are they any better off? Perhaps, perhaps not. That’s the existential conundrum that the movie explores, and yes it is a comedy – one, like “The Hangover,” that used grim humor to laugh at just how unpleasant life can be, despite our best efforts to find happiness. Considering that Polanski was an enthusiastic follower in the 1950s of the Theater of the Absurd movement and the plays of Samuel Beckett, “Pirates” comes close to being his “Waiting For Godot” – a movie that asks us to laugh at just how absurd life is.

The appeal of this kind of cruel, loutish humor started early in Polanski’s cinematic career. He created a short film in 1961 in Paris, “The Fat and The Lean,” that was strongly influenced by Theater of the Absurd and had a similar setup to the Red-Frog relationship used in “Pirates”. This kind of black humor, laughing at people’s suffering, would continue in his films “Cul De Sac,” “The Fearless Vampire Killers,” “What?”, “The Tenant,” “Bitter Moon” and “Carnage.”

Considering how much tragedy and suffering Poland endured starting in 1939, when the Nazis invaded, to their liberation from the Soviets in the 1990s, that’s a lot for any nation to endure. No wonder there is a tendency to find humor in the misery life throws at us – it may be one of the best coping mechanisms for a nation that felt powerless to shake off the shackles of Nazi and Soviet oppression.

“Pirates” is Polanski’s Theater of the Absurd production. And if you enjoy that kind of twisted humor — rather than, say, nice pleasant wholesome family fun – then “Pirates” is definitely worth checking out.