Jewish Cinema: Polanski’s “The Tenant” is not the tale of a madman

Home /Media, Opinion/Jewish Cinema: Polanski’s “The Tenant” is not the tale of a madman 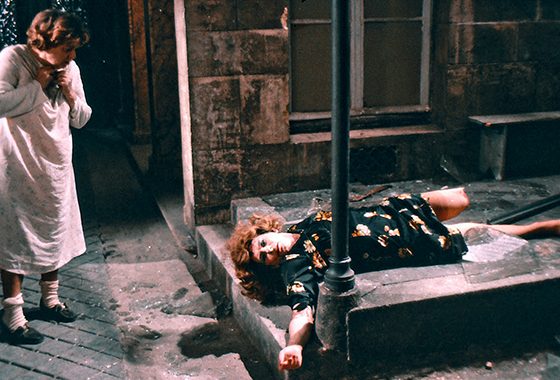 But while devoting a considerable amount of this lengthy article to Polanski’s portrayal of women as victims through Carol in “Repulsion” and Rosemary in “Rosemary’s Baby,” Moore stumbles when her critique turns to “The Tenant,” which features a male rather than female protagonist.

Moore attempts to connect the three films anyway, noting that the lead character of “The Tenant,” Trelkovsky, finds himself slowly being transformed into the former tenant of the apartment he now occupies – a woman named Simone Choule, who made the apartment vacant after throwing herself out the window.

It’s his neighbors who push the transformation, it seems. After Trelkovsky moves into the apartment, the landlord asks him to wears slippers at night, as Simone did, because it’s quieter; the concierge gives Trelkovsky mail that was intended for Simone; and the owner of the café across the street serves him chocolate rather than coffee, which is what Simone used to order. Trelkovsky starts to suspect this is no coincidence, that a plot is underway.

Moore, however, offers a fundamental misreading of the movie, suggesting it amounts to nothing more than the story of a man going insane.

“One way to describe ‘The Tenant’ is to say that it starts out as ‘Rosemary’s Baby,’ with Trelkovsky’s neighbors seemingly involved in a conspiracy against him … and turns into ‘Repulsion,’ with Trelkovsky revealed as a dangerous, delusional, and hallucinating madman whose beliefs can have only the most tenuous connection to reality,” she writes. “Because we have so much trouble understanding Trelkovsky, he is not, unlike Carole, especially sympathetic or compelling once he’s revealed as mad.”

There’s no question that Trelkovsky is deeply paranoid. The bigger question that Moore never answers, though, is whether the meek and introverted file clerk has good reason to be.

What Are The Themes in Polanski’s The Tenant?

“The Tenant” started out, in 1964, as a novel, “Le Locataire Chimerique,” by the French author, graphic illustrator and satirist Roland Topor. Topor’s family was Jewish and Polish, and he was born in 1938 in Paris. After the Nazi invasion of France in 1940 and the implementation of Hitler’s Final Solution, anti-Semitic neighbors denounced the Topor family to authorities, and they had to go into hiding.

The same was true for Polanski, a Polish Jew whose parents were living in Krakow when Germany invaded Poland in 1939. Polanski’s mother died at Auschwitz, while his father was sent to, but survived, the concentration camps. Polanski himself lived in the countryside with a rural Catholic family for much of the war.

In adopting the Topor novel, Polanski seems keenly sympathetic to its conspiratorial themes. Trelkovsky is a shy man who is desperately in need of an inexpensive apartment in housing-strapped Paris, and finds one only after the previous tenant, Simone Choule, commits suicide. But her apartment still contains her old furniture, some of her clothing and even a tooth that Simone may have placed in a small hole in the wall. And from the beginning, Trelkovsky finds that his neighbors hardly roll out a welcome mat. After he has a housewarming party, neighbors complain bitterly about the noise he makes, and from then on, are constantly pounding on his walls.

Increasingly terrified of disturbing the neighbors and losing his flat, Trelkovsky begins to suspect there is more to the noise complaints than he initially assumed. He comes to suspect the neighbors are trying to turn him into Simone Choule so they can force him to commit suicide in the same manner. He watches in panic as the glass roof befow his window, which Simone shattered in her tragic fall, gets replaced. He becomes convinced it’s being replaced specifically for him.

While the movie’s screenplay, by Polanski and his longtime collaborator Gerard Brach, painstakingly follows the Topor book, it’s been noted by some critics that one discrepancy comes toward the end. After Trelkovsky (played by Polanski) jumps from his window but survives a fall through the glass roof, the director edits the film to show Trelkovsky’s perception of his neighbors – jeering at and sadistically cheering on his suicide attempt – contrasting with the neighbors looking shocked and bewildered at what he did. Which is the reality?

This could also be a misreading of Polanski’s intent. Rather than confirming that Trelkovsky is definitely “mad,” the film toys with the idea that he is seeing the world more clearly than we are. The suggestion is that the neighbors put on a bland, ordinary front for the world to see — one that masks their much darker views, including anti-Semitism.

How Did The Nazis Represent the ‘Banality of Evil’?

In her book “Eichmann in Jerusalem: A Report on the Banality of Evil,” political theorist Hannah Arendt, covering the trial of ex-Nazi SS commander Adolf Eichmann in Israel, wrote that he was not a fanatic or sociopath, but an average man who said he was simply following orders. The monstrosity of his actions never quite rose up to how bland and unexceptional he seemed, she wrote. Evil, as it turns out, can appear quite ordinary to the general public.

In his autobiography “Roman by Polanski,” Polanski wrote that the Nazis were able to carry out the Holocaust by repeatedly lulling the Jewish community into thinking it wasn’t going to be as bad as some of them feared, by repeatedly giving them a false sense of hope that it might turn out all right. The ones who feared the absolute worst, that the Nazis were planning their wholesale slaughter, might have had a tough time convincing others – who couldn’t bring themselves to believe it would turn out that horrifically.

Polanski’s “The Tenant” captures this intense and crippling sense of paranoia. Although set in the 1970s, the movie also evokes a sense of what it was like to be a Jew or gay in Germany in the late 1930s, or in France after the Nazi takeover — a feel for what it’s like to be viewed as an outsider, as someone who is undesirably different from the pack. Trelkovsky is also painfully aware that he is weak and timid, and that weakness viciously attracts those harassing him. He seems like an exceptionally easy mark.

So when Trelkovsky views his neighbors in the final scene as menacing and encouraging his death, is he truly acting “mad” – or is he seeing them more clearly than the rest of us? Just because you’re paranoid doesn’t mean you’re not being persecuted.

In Germany in the 1930s, perhaps right up until Kristallnacht, the Nazis may have seemed like average, everyday people, who shop in the same stores, go to the same movies, dine at the same restaurants. Nothing exceptional about them at all.
For those Jewish residents who feared them, they saw something far more insidious and terrifying under those finely tailored SS outfits. They saw the danger lurking below.

Roland Topor and Roman Polanski, both Polish Jews who survived the horrors of the Nazi party and the Holocaust, have understood the concept of paranoia all too well, based on their personal history – and documented it in “The Tenant” just as effectively.

Topor’s family was denounced to the authorities because they were Jewish, while Polanski’s pregnant mother died in Auschwitz. They wanted the rise of supreme evil, and its triumph until the Allies defeated Nazi Germany in 1945.

In that sense, the story is anything but the tale of a delusional madman.