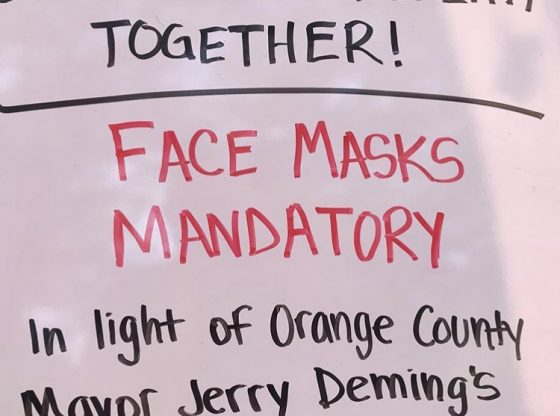 JACKSONVILLE — The City of Jacksonville appears ready to host the Republican National Convention in August, with the expectation of millions of dollars pumped into the local economy. But now the question is: Are the delegates who are coming to the convention prepared to wear masks during this major event?

On Monday, the City of Jacksonville imposed a mask-wearing mandate across the city for outdoor public and indoor dining activities. With coronavirus cases exploding in Florida — nearly 10,000 new cases reported on Sunday alone — it’s not clear if the mask mandate will still be in place when Republicans gather in the city from Aug. 25-27. On Aug. 24, the opening day of the convention will be held in Charlotte, N.C., and then relocates to the VyStar Veterans Memorial Arena in downtown Jacksonville for the remaining three days of the convention, when President Donald Trump will give his acceptance speech.

It’s not clear what the response of the GOP delegates will be if the mask rule is still in place. The party has been sending mixed messages about masks in recent weeks: Florida Gov. Ron DeSantis has refused to issue a statewide mandatioory mask order despite the state’s rising caseload, and President Donald Trump avoids wearing a mask in public.

At the same time, Senate Majority Leader Mitch McConnell has said the party should avoid any stigma about wearing masks in public, while Vice President Mike Pence sometimes wears a mask in public. So is the GOP about to become the mask-wearing party, following the lead of former Vice President Dick Cheney, who recently tweeted a photo of himself wearing a mask with the hashtag #realmenwearmasks.

Why Did The GOP Choose Jacksonville?

While the Republican National Convention was originally scheduled to be held entirely in Charlotte, North Carolina’s governor, Roy Cooper, imposed social distancing measures that would have limited the GOP’s ability to fill a packed arena. That angered President Trump, who then wanted the convention pulled from that city and moved to another one. The Republican National Committee eventually decided to continue holding at least one day of the convention in Charlotte to avoid angering voters in North Carolina, a crucial swing state. DeSantis, a strong Trump supporter, actively lobbied for the convention to be moved to Florida, and shortly afterwards, it was announced that Jacksonville would be serving as the host city.

At the time, though, Florida’s COVID-19 caseload seemed far more manageable.  In late March, DeSantis had issued a statewide stay-at-home order to help curb the rate of infection in Florida — weeks after many other states had already done so. The order was lifted after 30 days, and DeSantis allowed the reopening of restaurants, bars, gyms and other businesses with limited seating capacity.

But in the past few weeks, the state’s COVID-19 caseload has soared. On Saturday, Florida shattered its previous record for new coronavirus cases by reporting 9,585 infections, and hospitals around Miami reported they were nearing capacity from all the new COVID-19 cases. Over the weekend in Jacksonville, there were six-hour lines as thousands of people showed up to get drive-through tests. In Orlando, almost 60% of all cases diagnosed in Orange County have happened in the past two weeks.

DeSantis just announced that he was shutting down bars statewide, as he blamed the increase in cases on young people crowding into bars and ignoring social distancing orders. A number of South Florida cities have closed their beaches for the fourth of July weekend, and Orlando is hosting an online July 4 fireworks show that people can view from their home rather than allowing people to gather at Lake Eola Park for the traditional show.

Orange County also announced it would require people to wear masks when they’re out in public, and on Monday, the City of Jacksonville did the same with a post on Twitter that read “At 5 p.m. today, the City of Jacksonville will be adopting a mandatory mask requirement for public & indoor locations, and in other situations where individuals cannot socially distance. Please continue to practice personal responsibility to help stop the spread of this virus.”

Why Are Masks So Controversial?

There’s no question that wearing a mask has become highly controversial, particularly among supporters of the president. In an article in Psychology Today, “Why Are Masks Triggering Conflict And Rage?”, author Seth J. Gillihan noted that masks have become a dividing line over political views. He wrote:

“…Face masks are tied to the political conflict over our response to the coronavirus. Those who lean left politically tend to see the virus as a more dire threat; those on the right are more likely to downplay its seriousness or compare it to less deadly strains like the flu, often following the lead of conservative politicians. Accordingly, masks may be seen as a marker of political loyalty, triggering feelings of us-versus-them …”

The issue has also divided Republicans.Conservative Fox News host Laura Ingraham has criticized mask wearing as a tool to fight the spread of Covid-19, warning that “social control over large populations is achieved through fear and intimidation and suppression of free thought.”

In August, the battle over masks will be played out on a national stage in Jacksonville.