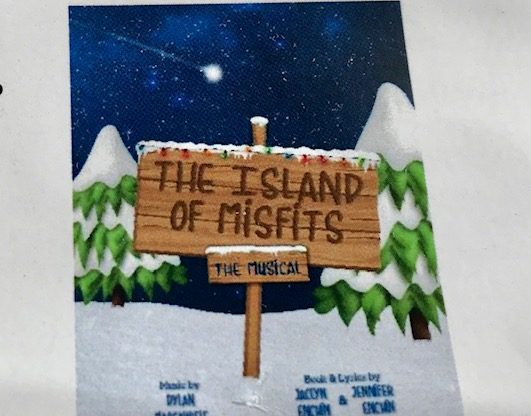 WINTER PARK — Fans of the Christmas TV favorite Rudolph the Red-Nosed Reindeer, take note: there’s a new musical being developed that aims to create an entirely new and appealing holiday experience, this one for the theater.

Rudolph, of course, premiered on Dec. 6 1964, as an animated television special based on the classic Johnny Marks song “Rudolph the Red-Nosed Reindeer,” and told the story of how Rudolph became Santa’s lead reindeer on Christmas Eve. The special airs every year round the holidays, as it has for decades.

One of the most enduring and appealing aspects of that story has always been Rudolph’s journey to the Island of Misfit Toys, a frozen landscape filled with unloved or unwanted toys that don’t ever expect to become Christmas presents for girls and boys around the world, and instead live with their ruler, a winged lion named King Moonracer.

It doesn’t surprise me at all that someone came up with the idea of setting a full-scale musical on the Island of Misfit Toys, along with an adventure that involves rescuing a kidnapped Santa. If that sounds intriguing, you have a chance to see the show on Sunday at 3 p.m. at the Winter Park Playhouse, which has spent the past three days hosting the Florida Festival of New Musicals, an opportunity for playwrights and composers to test run their work before it gets a full productions.

On Saturday, a superb ensemble cast staged a reading of The Island Of Misfits The Musical, a show that has a lot of potential to become a holiday perennial in the same way that productions like A Christmas Carol and It’s A Wonderful Life keep coming back to local stages around Thanksgiving.

What is The Island of Misfits The Musical About?

The Island Of Misfits The Musical is being imported from New York, where it was created thanks to a story by writer Larry Little, who turned it over to the capable hands of writers Jennifer and Jaclyn Enchin to create the book and lyrics, and then for some truly sublime and irresistible songs composed by Dylan MarcAurele.

The staged reading was directed by Michael Edwards, a veteran actor and director of previous Playhouse shows. The story opens in Wisconsin, at a department story where a young sales clerk, Grace, can’t wait for the next three days to go by — and with it the Christmas holiday — so she can quit her job and pursue her true ambition, to become an astrologer. Her ambitions get a jump start thanks to her supervisor, Charlotta, who is as greedy, annoying and money-obsessed as the day is long.

But Grace and her co-worker Nicki, who still believes in Santa, come to the attention of none other than Moonracer, the lion that rules over the Island of Misfit Toys. He decides to sweep them onto the island in the hope that they can help solve a major dilemma: Santa has been kidnapped and Christmas is coming up fast.

The reading covered mainly the first act of this musical, and while Rudolph was nowhere to be seen, Santa and the Abominable Snowman make appearances, along with an Elf named Schmedrick who has ambitions to be — no, not a dentist, but a carpenter. It has a suitably cruel villain and some funky toys, including a Rubik’s Cube that has the misfortune of being only one color, and a Karaoke box that has tons of great songs, but can’t carry a tune.

The show is whimsical and funny, and one member of the audience later compared to it The Wizard of Oz and Dorothy’s adventures in the Land of Oz, although that comparison didn’t actually occur to me while watching the show.

Why Go See The Island Of Misfits?

With the very strong score by MarcAurele and plenty of clever, witty lines and gags, I get the feeling that The Island of Misfits truly does have the potential to become a real audience pleaser, and to find some durability on stages around the country, particularly during the holidays.

It’s also well worth your time to see the Playhouse’s reading of the show, considering just how ideally the actors were selected for their roles. As Grace, Taylor Colleen Chaulker seems young and innocent, but hardly naïve, and smart enough to outsmart the folks who kidnapped Santa; while as her sidekick, Courtney Cunningham is a delight as the often dim-bulb Nicki. Her romance with Schmedrick, played with fine comedic skill by Wesley Slade, also works quite well.

And there are plenty of other fine performances, including Cynthia Beckert as the off-key karaoke player, Todd Allen Long as Moonracer and Dave Thome, who has a grand old time as both Santa and the Abominable Snowman. And the producers might want to consider importing Aimee Aballo for the first full run, so they can take full advantage of her scene-stealing performance as the villainous Charlotta.

Where Can You See This Festival?

The Florida Festival of New Musicals is being performed at the musical theater at 711 Orange Ave., Suite C in Winter Park. Call 407-645-0145 for details and more information.

Sunday is the festival’s final day. The schedule of shows is: