Is it art or just scratching? Living Canvas aims to set a higher standard for the tattoo industry

Home /Business/Finance/Is it art or just scratching? Living Canvas aims to set a higher standard for the tattoo industry 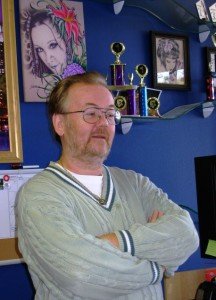 FOUR CORNERS – Malcolm Arnott can remember the seemingly epic struggle he faced when he first wanted to open a tattoo shop more than a year ago. The search for a good location in one of Central Florida’s numerous shopping plazas wasn’t easy – and that wasn’t because there was no office space to rent.

The problem was, Arnott found a lot of doors closed to him when he told them what kind of shop he wanted to operate.

A tattoo shop, it seemed, was almost taboo to some landlords.

“We went to eight malls and every one refused us,” Arnott said.

Cut to 15 months later. Anott and his son James have been operating Living Canvas Art Company Custom Tattoos for that period of time, and found a receptive local business environment and a healthy stream of customers in their chosen location.

“We came to the landlord here and said ‘This is what we want to do,’ “ Malcolm Arnott said, and this time around, they get approved.  Their shop is at 9310 U.S. 192, Suite 8, in Four Corners, the section of Central Florida just south of Walt Disney World and Celebration where the counties of Lake, Orange, Osceola and Polk meet at U.S. 192 and U.S. 27. Arnott said the decision to open up in Four Corners proved to be a smart one.

“We didn’t want to be touristy, but we obviously knew tourists would be a part of our business,” he said.

With so much traffic along U.S. 192 – and so many international visitors, U.S. tourists and snowbirds flocking to Four Corners — the Arnotts don’t even bother advertising anymore. They get plenty of walk-ins without it.

“We’re now getting people coming in to say ‘We were going to drive down to Miami, but decided to check you out,’ “ Malcolm Arnott said.  “We do absolutely no advertising at all, but tourists will come in and talk. Yesterday we got seven bookings.”

“It’s different every day,” James Arnott said.  “We get clients from every single continent.  We’ve done it to people from the Philippines to China.  We get a lot of what we’re calling ‘Popping their Cherries’ – their first tattoo.  We got one women in here for her first tattoo, and she was 84.”

Their success in finding both a home and a client base, Malcolm said, demonstrates the fact that the tattoo industry is evolving, and that having a tattoo is far more universally accepted today than it was not so long ago.

“There are just under 50 million people with tattoos,” Malcolm said.   “There are 13,000 McDonald’s in the United States, and 22,000 tattoo shops. Old tattoo shops are dying out, and new ones are coming in.”

Malcolm said he understands that the tattoo industry has had an image problem.  He said Living Canvas is unique for two reasons.  First, the people who do the tattoo are all, he insists, true artists.

“The artists are actually just that – artists,” he said.  “They’re not flash jockeys. That means you’re a scratcher.”

A scratcher, he said, simply takes a drawn image and retraces it on a client. Malcolm said his artists actually do original work.

“Somebody might come to the scratchers with a piece of work and they will trace it.  The scratchers are not artists, they can’t draw,” he said.  “If you put alcohol on it, it will come right off. Eighty percent of our work is custom work.”

Living Canvas is unique for another reason: all three of the tattoo artists are women, in an industry more traditionally dominated by men.

“Most people who will approach a tattoo shop, you have a rougher element hanging around, and all the tattoo artists were men,” Malcolm said.  “It’s changing a little bit, especially if the shop looks inviting, and you don’t have heavily tattooed, pierced, mohawked types hanging around.”

Living Canvas tries to create a more inviting, even family oriented, environment. They have a television set and play area for young kids who are waiting while their parents get a tattoo. Anyone interested in a tattoo has to be at least 16 years old to get one.

Another thing that’s changed, he said, is that there’s no longer a particular type of person looking for a tattoo. Entire families have come into their shop looking for one.

“Fifty percent now go for, shall we say, a reason,” Malcolm said. “In other words, a mother, father, loved one who died and was important in their life.  We had a mother and son come in. He was 16 years old and he just said ‘I want a tough-looking tattoo.’  The mother wanted three tattoos of three butterflies all named after her sons. Fifty percent of the people are having it done for special reasons.”

“It’s the artist more than anything that dictates the shop,” James added.  “If you’ve got good artists, people will come.”

Intimate setting or a wild party: take your pick at the Funky Monkey Wine Bar on New Year’s Eve.
Will Hyperion Wharf save Pleasure Island or make it more ordinary? The debate is on.