Infestation, a Spoof of 50s Horror Flicks, Is Silly Fun 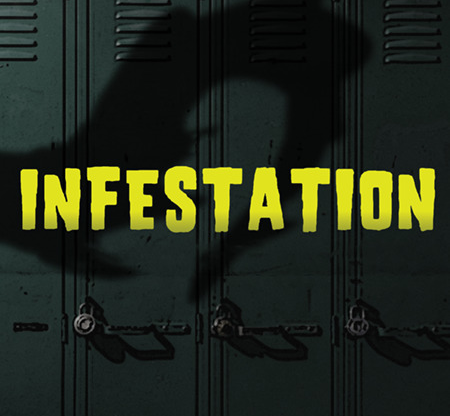 Mary Sue and Annette worry about taking the right guy to the prom, the principal cautions the kids not to spike the punch or to dance too close, and another student, Rico, thinks about sex a lot and has a seemingly endless supply of penis jokes. It all seems so innocent that you half expect John Travolta and Olivia Newton-John to stop by and sing “You’re The One That I Want.”

But all is not entirely well at this Midwestern high school, where a life-size queen wasp is luring teachers and students into the woods to bite their necks and transform them into wasp creatures (hate when that happens!) Can the kids find a way to save humanity, perhaps with the help of the very thick accented German professor Leopold Kuritsky, who is hot on the trail of the wasps?

Infestation, a spoof of 1950s horror movies like I Was A Teenage Frankenstein, is silly, silly, silly — and fortunately, doesn’t take itself at all seriously, so it’s mostly a lot of zany fun. The cast of 11 performers, not in the least bit nervous about hamming it up shamelessly, adds to the fun.

What Is Infestation All About?

Once the Queen Wasp begins sinking her needles into the necks of unsuspecting teachers, let’s just say class is never quite the same, and writer/director Karl Schulze has fun spoofing old classics like The Fly, campy acting and all.

He has even more fun when he has one of infected the teachers, Miss Gerund, have the class read Franz Kafka’s The Metamorphosis (nyuck nyuck), which is one of the show’s funniest scenes. And, of course, there’s a climactic battle to save the high school and do away with the wasp creatures.

Schulze has a good sense of how in those 50s films, the kids were all sweet and innocent and screamed a lot, and the monsters were often more comical than terrifying, especially for anybody who has seen Saw or Hostel. He adds in something that wasn’t available much in those 50s flicks: sex gags, include handsome young Rico attracting the attention of an infected Miss Gerund, and … well, if Rico was eager to lose his virginity, let’s just say he goes out in style.

Infestation is being performed at the Pink Venue at Orlando Fringe, and the show runs for 60 minutes. Upcoming performances are on: