In Tourism-Loving Winter Park, Hotels are a Unique Part of the City’s History 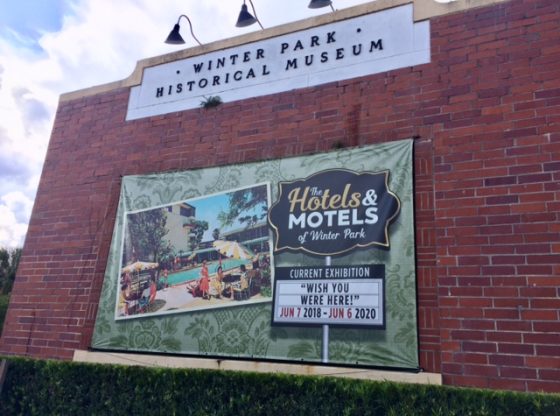 WINTER PARK — It’s hard to believe today, but at one time the hotels in Central Florida all shared a certain characteristic that seems distinctly non-Floridian today: none of them had air conditioning.

Granted, this was the period after the Civil War, when Florida’s year-round tropical climate made the Sunshine State a popular spot for visitors from cold northern states who were fed up with blizzards, ice storms and the like.

And truly, a lot has changed since then.

If Florida became a vacation paradise in the years after the Civil War and eventually one of the world’s great tourist destinations — with tons and tons of AC everywhere you go in this state — the interesting path that the state took to get here is documented in a new exhibition at the Winter Park History Museum, which demonstrates that hotels and motels changed right along with the public’s concept of what amounted to comfort and great guest service.

What’s the Exhibit on Winter Park’s Hotels All About?

As one of Central Florida’s popular tourist destinations, with the shops and unique restaurants along Park Avenue consistently bringing in visitors, the City of Winter Park has long understood the need to keep tourists happy.

This exhibition, though, notes that what has been offered visitors over the past century when it comes to accommodations has undergone some significant changes.

“Wish You Were Here: The Hotels and Motels of Winter Park” is not a large exhibit; it fills up the cozy space at the museum located right off Park Avenue and right behind the Winter Park Farmers Market.

But it does have some unique memorabilia from the hotels and motels of decades past, along with photos and details about lodging that the oldest locals are likely to remember, but today are mainly properties that have faded off into the history books.

A good example is The Langford Resort Motel, which was open from 1956 to 2000, in the heart of downtown Winter Park on East New England Avenue. It seemed to fit the bill for what tourists were looking for in the 1950s, and capitalized on the changing public needs.

“In 1956 when Robert Langford builds his namesake hotel, America is transforming into a mobile society — by car and plane — and Winter Park’s luxury hotels are on the decline,” the exhibition’s liner notes point out. “The seasonal hotels seem dated, tired, and very warm — since none of them were air conditioned.”

Hard as that is to believe today, the exhibit notes that the Langford became the place to stay for a while in Winter Park, offering not just accommodations in nicely air-conditioned rooms, but also entertainment in their signature Empire Room.

“The Empire Room sign is a bit of nostalgia from the Langford Hotel,” the exhibit notes. “For decades (1955-2000), this popular nightclub featured talented singers and entertainers in a sophisticated dining club atmosphere.”

In fact, the Langford got so ambitious that in the 1970s they added something unique for a hotel: a small zoo on the property, complete with an alligator, two flamingoes, a raccoon, possum, and even a black bear cub named Peek-A-Boo.

It was only when this modest zoo began creating an “unpleasant scent” for the tourists lounging by the pool that the animals got relocated to Busch Gardens, the animal theme park in Tampa.

What Other Hotels Did Winter Park Once Have?

Over the years, the exhibition notes, as Florida’s reputation as a tourism Mecca just kept getting stronger, hotels and motels came and went in Winter Park — The 17/92 Motor Court on Webster Avenue, the Dandee Cottages on Canton Avenue, The Osceola Inn on the north bank of Lake Osceola, and the Lake Shore Motel on Morse Road, among others.

But it wasn’t just hotels or motels that opened to accommodate the growing number of northern and European tourists coming to Central Florida. For a while, boarding houses were a hit as well, particularly in the 1890s, when people arrived in the city by train.

“Throughout the years, there have been dozens of boarding houses throughout Winter Park’s residential areas,” the exhibit notes. Names from the very distant past included The Cozy Cottage, Barron Hall, Selt House, and Mrs. Trude’s Boarding House.

As that last name indicates, they were often operated by women.

“Your landlady is often servant, manager and owner,” the exhibit notes. “Advertising of the late 1800s promises that guests will be comfortable in a well-appointed home and that meals will be served at a gracious table.”

Other forms of accommodation have included tourist cottages as well.

Today, much has changed. One of the city’s best known hotels for years was the Mount Vernon Inn, which the exhibit calls “the last of the highway motels.” It closed in 2014, and, in a sign of the times, was replaced by an upscale residential community called Lakeside Crossing, which also has restaurants like the Kona Grill.

Today, the city has the historic Park Plaza Hotel, which was built in 1922 and is the only hotel on Park Avenue in the heart of downtown, and close by is The Alfond Inn, which sits on the spot where the Langford once was, and opened in 2013 as a $32 million boutique hotel.