MAITLAND — The Holocaust Memorial Resource & Education Center, which has been the target of recent harassment by anti-Semitic protestors, is turning its focus on another group that became victimized by the Nazis during the Holocaust: homosexuals.

This month, the Holocaust Center in Maitland ha launched an ongoing dialogue of stories by people who became tragic victims of the Nazi era, whose stories may not be as well known to the general public. This is a follow-up to an exhibition that the Center hosted last year, titled Nazi Persecution of Homosexuals. As the Center pointed out, now they want a dialogue about how prejudice and hate impacts different community groups within our culture.

What Was the Center’s Nazi Persecution Exhibit? 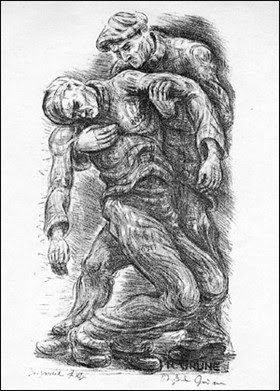 “This time last year, we would have had the opportunity to display an exhibit titled Nazi Persecution of Homosexuals 1933-1945 from the United States Holocaust Memorial Museum,” the Center noted. “The 30-panel display tells stories of the lives of gay men, the impact of Paragraph 175, how police targeted gay men, the story of labor and concentration camps, and life after the war.”

However, the unprecedented lockdowns from the Covid-19 pandemic prevented this exhibit from going forward, although as the Center noted, “This relevant aspect of the Holocaust’s history cannot be denied and should not be forgotten. Because of this, we would like to share a few stories this month from the lesser-known victims during the Nazi era.”

The Nazis targeted a lot of different groups, including Jews, Communists, political opponents, Roma, and gay people. While Jews were forced by the Nazis to wear Yellow Stars, homosexuals who were sent to concentration camps were made to wear Pink Triangles. This was considered a badge of shame for prisoners wearing the downward-pointing, pink triangles sewn onto their uniforms.

“Nazi persecution during the Holocaust ran deep,” the Center noted. “Not only were Jews victimized but many others, including homosexuals, were seen as an alien threat to German racial purity and community. Because of this, thousands of gay men suffered greatly.”
Long before Hitler took power in 1933, German law had already criminalized homosexual behavior in what was known as Paragraph 175 of the criminal code, which made male homosexuality illegal.
If enforcement of the code had been lax in the 1920s during the Weimar era, especially in Berlin, Hitler changed that quite quickly.
“With this code in place, the Nazis arrested an estimated 100,000 homosexual men, 50,000 of whom were imprisoned,” the Center noted. “Between 5,000 and 15,000 of homosexual men were interned in concentration camps in Nazi, Germany as well. These prisoners were marked by pink triangle badges and, according to many survivor accounts, were among the most abused groups in the camps.”
The treatment of gays in concentration camps was extraordinarily brutal.
“Homosexuals in these camps experienced an unusual degree of cruelty by their captors,” the Center noted. “Some of these included: being used as target practice on shooting ranges, subjected to medical experiments as scientist tried to find a “cure” for homosexuality, and further still, some were even forced to castration.”

The end of World War II and victory by the Allies brought an end to concentration camps and Germany’s extreme anti-Semitic laws – but not to laws banning homosexuality.
“Following Germany’s defeat, most of the Nazi-era laws were revoked. However, the revisions to Paragraph 175 remained in effect,” the Center noted. “With this, many homosexuals were forced to serve out their terms of imprisonment regardless of time served in concentration camps.”
That wouldn’t change until 1969, when Paragraph 175 was revised and West Germany decriminalized homosexual relations between men over age 21. In 1994, a reunified Germany abolished Paragraph 175 altogether, and recently pardoned those convicted under the statute during the Nazi era.

Why Did The Holocaust Center Start This Dialogue?

The Holocaust Center said it started this dialogue to begin sharing more stories of those who were victimized by the Holocaust, and to see what can be learned from these tragedies. They called on the public to do the same.
“Please help us to continue sharing important stories and lessons of the Holocaust to educate, build empathy, and take a stand against all forms of prejudice and bigotry,” the Holocaust Center noted.
Last month, the Holocaust Center was targeted by an anti-Semitic group.On May 6, a van pulled into the Center’s driveway and the group inside began protesting on their property. The protestors had hate-filled messages that ironically included a sign that read “Jews Promote Homosexuality and Feminism.”
Campus security at the Roth Jewish Community Center and local law enforcement denied the protestors entry on the property, and the staff and people on campus were kept safe.

The antisemitic group didn’t go away quietly, though. They parked across the street and used signs and megaphones to continue to spread their  propaganda and hateful rhetoric.

Alienation and Isolation in the Covid-19 Age: The Tenant Turns 45
California Man Arrested for Targeting a Minor Online

Pulse Remembrance: An Evening of…