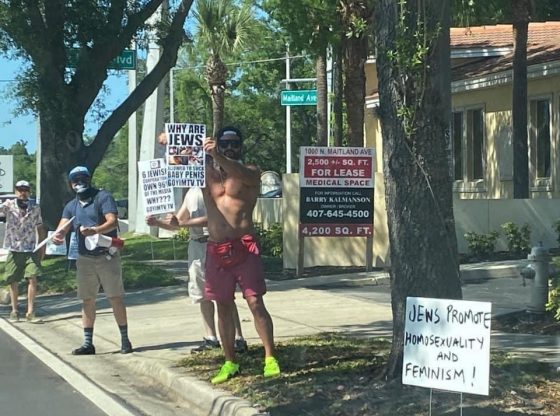 MAITLAND — The rising incidents of antisemitic violence happening across the nation has also put the employees and visitors of the Holocaust Memorial Resource & Education Center of Florida on edge, now that they’ve become the target of protests by an antisemitic hate group.

The protestors arrived this month in a van decorated with Holocaust denial slogans and other hate-filled messages, including a sign that read “Jews Promote Homosexuality and Feminism.”

What Happened When the Antisemites Arrived? 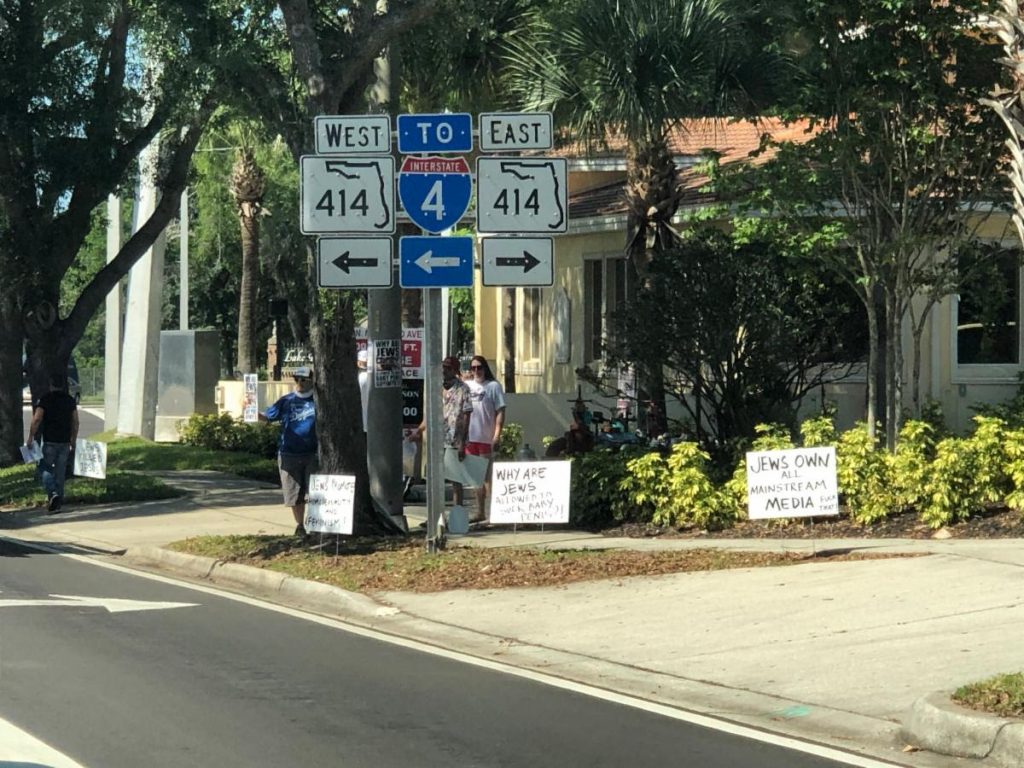 Lisa Bachman, who handles media relations for the Holocaust museum next door to the Roth Family Jewish Community Center in Maitland, noted that the van pulled into the Center’s driveway on May 6 so the people inside could begin protesting on their property.

“Thankfully, our incredible security team, including campus security and local law enforcement, was in full control of the situation,” she noted in an email. “The hate group was denied entry, our staff and people on campus were kept safe, and no physical damage was done to our property.”

The antisemitic group didn’t go away quietly, though.

“This group was persistent,” Bachman noted. “They parked across the street with signs, megaphones, and propaganda shouting disgusting rhetoric. They attempted to hand out flyers to cars as they stopped at traffic lights. Their hateful messages were clear and were intended for anyone who would listen.”

This wasn’t an isolated incident. In the past few weeks, there has been a horrific increase of antisemitic vandalism and violent attacks reported to police in major cities such as Los Angeles, Chicago and New York, as deadly fighting escalated in the Gaza Strip between Israelis and Palestinians. The Jewish civil rights group the Anti-Defamation League is reporting an increase in online and in-person incidents of antisemitism across the U.S. while the fighting between Israel and Hamas continued.

On Friday, President Joe Biden denounced these antisemitic incidents as “despicable, unconscionable, un-American,” and added, “In the last weeks, our nation has seen a series of anti-Semitic attacks, targeting and terrorizing American Jews. We have seen a brick thrown through a window of a Jewish-owned business in Manhattan, a swastika carved into the door of a synagogue in Salt Lake City, families threatened outside a restaurant in Los Angeles, and museums in Florida and Alaska, dedicated to celebrating Jewish life and culture and remembering the Holocaust, vandalized with anti-Jewish messages.”

Bachman said the hateful message of the protestors at the Holocaust Center seemed clearly intended to harass and intimidate the local Jewish community.

“You may think this was a small event, that these people exist only on the fringes, that we should ignore it, but there is a cancer in our society that is hatred and bigotry and unfortunately it is not going away,” she noted. “It is not just history. It is happening here and now.”

Bachman added that these protests would not intimidate the Jewish Community Center employees or impact their mission.

“We recognize this as a clear demonstration of the necessity of our mission,” she noted. “We continue to be dedicated to the importance of our work to build a just and caring community free of all forms of prejudice and bigotry.”

Dallas Holocaust Center Speaks Out on the Middle East Violence

The Holocaust Center in Maitland also shared a statement by the Dallas Holocaust and Human Rights Museum on the crisis in the Middle East.

“The Dallas Holocaust and Human Rights Museum is heartbroken by the crisis in the Middle East,” the statement noted. “To say that the Israeli/Palestinian conflict, which has been decades in the making, is complex, is a gross understatement. Much has been written about the conflict and feelings and emotions run deep. Opinions differ about what led to the current eruption of violence, how to stop it, and how to work toward a peaceful resolution to this long-standing crisis. However, as a museum that was founded by Holocaust survivors, there are several points that are clear to us.”

The Dallas Center added, “From studying the Holocaust, we know it is critical that Jews have a nation state to which they can freely immigrate when they face oppression and persecution in their home countries. Israel is that state. We believe most Israelis and Palestinians long for peace and do not wish to live under threat or in conflict. However, we also know that Hamas is a self-avowed Islamic terrorist organization that has the primary goal of annihilating the Jewish nation state of Israel. The pursuit of peace is critical in the Middle East, but Israel has the right to defend itself against any and all attacks. Civilians – men, women, and children – are the victims of this conflict, and one life lost is one too many.”

They also called on all Americans to stand up to the rise in antisemitic violence happening across the U.S.

“Blaming American Jews for the actions of Israel is not acceptable and must stop,” the Dallas Center noted. ” We call upon all Upstanders to fight the growing scourge of antisemitism.”