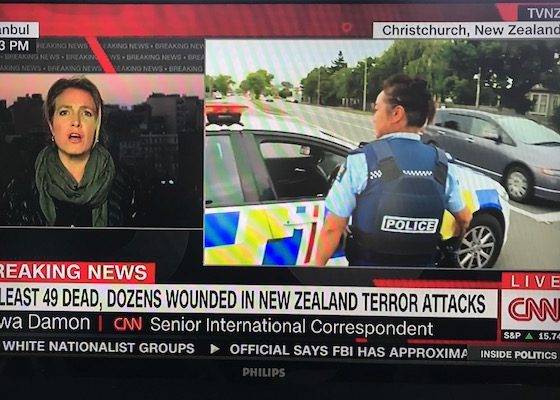 MAITLAND — The Holocaust Memorial Resource & Education Center of Florida has condemned the deadly and tragic shooting at two mosques in New Zealand that left 49 people dead.

“All people, no matter who they are, or where they reside, deserve to live free of fear in their daily lives,” the Holocaust Center said in a statement on the attack.

“We stand with all those hurting and afraid today, here and around the world because of this attack. We open our doors to our Muslim friends, and all people, who need a place of refuge to join together and stand against these horrific acts of hatred.”

At least 49 people are reported to have been killed in the mass shootings at two mosques on Friday morning. The mosques, filled with worshippers attending Friday prayers, came under assault by a white man armed with two rifles. New Zealand Prime Minister Jacinda Ardern has called this a terrorist attack, and a man was later arrested and charged with murder. Two other armed suspects have been taken into custody, although it’s not yet clear what role they played in the attack.

What’s Known About the Gunman?

The gunman had identified himself on social media as Brenton Tarrant, a 28-year-old Australian and white nationalist. He also posted a 74-page manifesto claiming he wanted to get revenge for attacks in Europe that have been committed by Muslims.

Even more horrifying is that he used a camera to livestream his violent and bloody attack on the worshippers at Christchurch’s Al Noor Mosque. At least 41 people were killed in that attack, and several more died during an attack on a second mosque in the city shortly afterwards.

The prime minister also announced that the national threat level had been raised from low to high, and she joined police in warning Muslims that they should not attend a mosque anywhere in New Zealand until the threat level was lowered.

The Holocaust Center responded this morning by condemning what they called “the hateful act of violence that killed at least 49 and injured many others in two mosques full of worshipers this morning at the ChristChurch in New Zealand.”

The Holocaust Center also pledged to continue reaching out to the Muslim population and offering support, and promised to work for healing across religious lines.

“Let’s pull together as a strong community to teach our children empathy; help them understand moral leadership; and that all people deserve dignity and respect as we send our heartfelt sympathies to the victims, the families at ChristChurch. and the entire New Zealand community,” the Holocaust Center noted.

This is the second time in the past five months that the Holocaust Center has condemned a violent shooting aimed at a religious group. In October, a gunman stormed the Tree of Life Synagogue in Pittsburgh, killing at least 11 of its members and injuring many more. During the rampage, police reported that the suspect, Robert D. Bowers, 46, had shouted “All Jews must die.”

It was the single worst attack of anti-Semitic violence on American Jews in the nation’s history. Bowers was arrested and charged with 29 counts of federal crimes of violence.

The Holocaust Memorial Resource and Education Center, which was built in 1986 and often hosts students from local schools to learn more about the Holocaust, had at the time urged the Greater Orlando community to stand up to hatred and violence, and rally together in response to the attack.