Holiday Fire Safety Promoted After Mattress Fire in a Camper 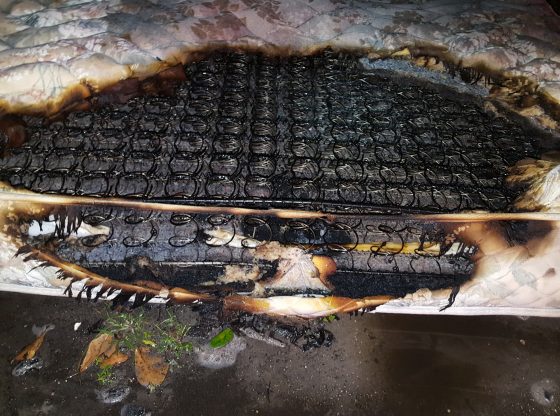 LAKELAND — A Polk County man was rescued from his camper on Saturday night after his mattress caught fire while he was asleep, and Polk County Fire Rescue is now reminding people to make sure they have a working smoke detector in their home, and to start thinking about holiday fire safety issues.

The camper did not have a smoke detector in it, the county department noted.

“Working smoke detectors are essential in fire prevention in both residences and commercial structures,” the department noted in a news release. “Ensuring that these devices are kept up to date and fully functional can provide early detection and save lives.”

The department got a strong reminder of that on Saturday, and noted that the man living in the camper — who has not been identified — is lucky to be alive.

How Did The Fire Start?

On Dec. 23, Polk County Fire Rescue crews responded to a call about a camper fire in north Lakeland. The call came in around 5:47 p.m.

A Fire Rescue crew responded to the scene and was the first to arrive at the Harrelson Road residence. The camper was in the backyard, and filled with heavy smoke. Firefighters would discover that a single mattress had caught fire.

The man living in the camper was asleep when the fire started, the department noted. Bystanders were able to get into the camper and pull the man away from the smoldering mattress, although they were not able to get him out of the camper.

“His well-being still in danger, Engine 23’s crew was able to complete the extrication prior to extinguishing the fire,” noted Chris Jonckheer, communications specialist for the Polk County Communications Division, in his report on the fire. “He was then transported to a local hospital.”

The camper did not have a smoke detector, and firefighters have not yet been able to determine what caused the fire.

The Importance of Smoke Detectors

The department noted that as of 2007, the U.S. Consumer Product Safety Commission has required all mattresses manufactured in the U.S. to contain flame-retardant chemicals. Those chemicals are designed to withstand an open flame for a short period of time.

if a mattress was manufactured prior to 2007, it might not contain these chemicals, which means it could catch fire much more easily.

And as the department noted, “Extended exposure to an open flame or heat source can have disastrous results.”

Polk County Fire Rescue also used this incident to remind the public about how important it is for your home to have working smoke detectors, “as well as keeping open flames and heat sources away from mattresses and furniture,” the department noted.

Public safety agencies often use December as a time to remind homeowners to stay safe during the holidays, and being sure to have a smoke detector is just one of numerous helpful tips being provided.

Others include reducing the chances of fires breaking out and practicing holiday fire safety a time when trees and homes are lit up with lights and large holiday meals are being prepared.

With the holidays being a time of family fun and celebrations designed to help people fully enjoy the season, the last thing anyone needs is the disaster of a fire, which is why it’s important to stay aware of potential fire hazards.

Fire agencies frequently point out that one of the biggest holiday fire safety tips is to keep your tree watered, since a dry Christmas tree that hasn’t been watered is far more susceptible to catching fire. That’s particularly true for anyone who leaves light strands that can heat up on a tree for long periods of time.

But without a doubt, the biggest safety tip and best defense against holiday fires is having smoke detectors throughout the house that are fully operational.