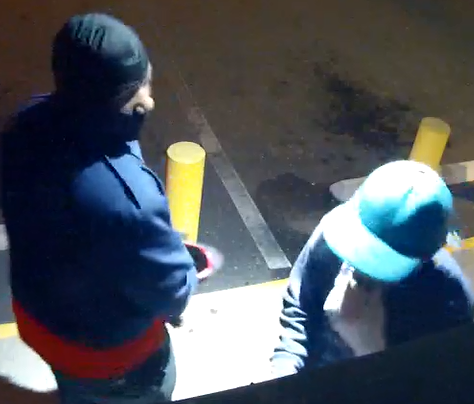 LAKELAND — In a twist on reports about Florida high schools that are targets of gun violence, the Polk County Sheriff’s Office just arrested two high school students, charging them with attempting to break into and rob a gun store.

Polk County Sheriff Grady Judd said there are two lessons to be learned here. First, that attempting to obtain guns illegally is a crime, and a serious one. And second, that all shops and businesses that sell weapons should have security alarms.

“These young men are facing felony charges for attempting to break into a gun store, which is a very serious offense,” Judd said. “Thankfully, the alarm did its job – along with steel security bars at the door — and no guns were stolen.”

Now under arrest are 17-year-old Jaquavious Harrison, who detectives say confessed to smashing the front window of the gun shop, Guns Galore, and 14-year-old Kaiden Brown.

“The investigation revealed that the two teens met in a local park before riding their bikes to the gun store where they attempted the break-in,” noted Sherrie Morgan, public information officer for the Polk County Sheriff’s Office, in her report.

She added that Brown was already on probation for a burglary charge dating back to Sept. 12, 2018.

Why Were The Teens Arrested?

When deputies arrived, they found the front window glass had been shattered. After checking video surveillance, detectives say it showed two men attempting to break in, with the first one wearing a blue jacket, jeans and a mask that covered part of his face.

According to detectives, the gun shop’s video show this teen pulling a framing hammer from a bag and smashing the glass, while the second suspect — wearing a blue hat and bandanna over his face — stood by.

After the glass shattered, the store alarm went off, and the video surveillance shows the two suspects running off.

However, Morgan noted that the surveillance video “also revealed information to link the suspect to a Lakeland school,” including the fact that the first suspect wore a jacket that had an Air Force ROTC patch on the upper arm. Detectives say that connected him to Kathleen High School.

How Were The Suspects Located?

Detectives went to Kathleen High, where the school’s resource deputy, a teacher, and a dean identified the suspect wearing the ROTC patch as Harrison.

“Our detective did a good job linking Mr. Harrison’s jacket to where we could find him,” Judd said. “We also credit the store owner’s security system and steel-reinforced storefront.”

On Wednesday, detectives located Harrison,  “who confessed to smashing the front window of Guns Galore,” Morgan noted, while adding that the investigation then led detectives to identify the second suspect as Brown.

Harrison was arrested and charged with:

Brown was also arrested and charged with:

* Attempted burglary of a building or structure;
* Conspiracy to commit burglary;

Guns Galore is a Browning and Kimber dealer that specializes in stocking and ordering hard-to-find items. Their selection includes new firearms from manufacturers like Ruger and Glock and used firearms, ammunitions and supplies. They’re also a licensed retailer of NFA restricted items, including Suppressors and Short-Barrel Rifles.

Stay in Syria, Hoda: The Welcome Mat is Gone
Virtual Reality is the new, Creative Way to Market Homes