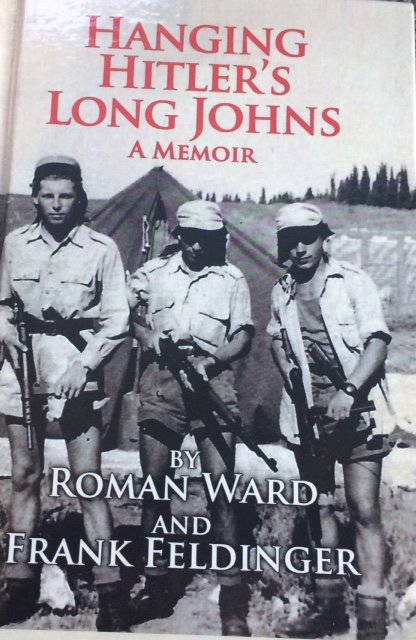 “Hanging Hitler’s Long Johns” is a Holocaust memoir by Roman Ward, a Polish Jew whose harrowing journey started in 1939, when he was just 10 years old. He was living in the city of Kalisz, where Roman’s father was a successful businessman and respected veteran of World War I, and where the family lived in a large apartment with servants. By the war’s end, he has witnessed total devastation across Poland.

And yet Roman survived, and the book not only describes the agonizing journey his family endured during the war, but also the aftermath, as the Soviets took over Poland and East Germany.

If you’ve read other memoirs about the Holocaust, there might be a part of you that feels like these books are too difficult to pick up and read, that they’re simply so horrifying to get through. There’s no question that “Hanging Hitler’s Long Johns” (a reference to young Roman’s impression that Nazi white flags looked uncannily like winter long johns) recounts a nearly unbearable amount of misery suffered not only by Roman and his family, but by all the other Jews in Poland, and by non-Jewish families as well.

But don’t let that discourage you from reading it. Roman is not a processional writer (he put together these memoirs with the assistance of Frank Feldinger, a journalist who has worked for publications like Fortune and Mother Jones), and the book benefits greatly by not feeling like it takes a “professional writer” approach.

The book is uniquely fascinating because of Roman himself. He describes horrific incidents that could have destroyed the willpower and psyche of so many others, but throughout it all, Roman maintains a tough, gritty outlook, a determination that he’ll look after his family as best he can (for much of the book he ends up alone with his mother in a frantic effort at survival), and even a cocky attitude (he has no hesitation about giving a good beating to anyone, teen or adult, who insults him and his family.)

But most of all, Roman recalls his journey without pity or defeatism. He was a teen determined to not only survive, but thrive in these grim wartime circumstances. In moments that seem unspeakably cruel and barbaric, Roman maintains a surprisingly good sense of humor. Even more important, in situations where so many Poles were rushing to stab others in the back to save their own skin, Roman always seemed determined to do the right thing. If you’ve ever wondered how people survive traumatic and inhuman situations, read this book.

“I survived to old age due to a series of miracles, as well as my own wits and strengths,” Roman writes in the book’s prologue. “Despite the poverty, terror and murderous hatred I encountered every day during — and in the aftermath of — World Was II, I forged a good life…” You won’t fully appreciate how ironic those words are until you’ve finished reading the last chapter.

In the book, Roman takes us through the start of the Nazi invasion of Poland in September 1939 through the war’s end, when the Soviets liberated Poland from the Nazi control, only to begin the slide into a different type of dictatorship. Initially Roman’s family is able to avoid the terrifying fate of other Jewish families because his beloved papa had close relations with many in the local Polish police department. But that only lasted so long.

As each city they fled to falls under Nazi control, Roman and his mother decide to escape to Warsaw, not fully aware of how badly that city is faring. His sister Halinka decides to stay behind in the town of Sandomierz, while his father had been arrested by the Nazis. So for much of the book, Roman details the efforts he makes with his mother to hide — in big cities like Warsaw, in small villages, out in the forest — and to pretend to be Catholics, not Jews. They find themselves relying on the help of others — often villagers and farmers who allow them to stay with them, often in return for doing work on the farm.

These chapters create an overpowering sense of absolute paranoia. There were rewards for turning in suspected Jews to the authorities, and Roman and his mother have to cope with more than their share of blackmailers and morally bankrupt lowlifes looking for money, their personal possessions, even sexual favors in return for not denouncing them. The Polish police were not above this, either. In a lot of instances, the motive wasn’t even hatred of Jews or political feelings, but simple human greed.

At the same time, the Nazi threats of punishment for anyone, Jewish or gentile, who harbored Jews, made their efforts to find shelter considerably more difficult. Even the suspicion that Roman and his mother might be Jews prompted more than a few families to turn they away without explanation. There’s a particularly horrifying moment where Roman and his mother, unable to find shelter for the night, sleep in the forest … until a pack of hungry wolves surround them, and they spend the night screaming at the wolves trying to ward them off.

“Hanging Hitler’s Long Johns” is not an easy read. In the very straightforward, matter-of-fact that Roman recounts his experiences during the war, it paints an abominable portrait of just how cruel and vicious people can be toward one another in extreme situations. The willingness to turn in others, whether motivated by greed or hatred, is overpowering. It’s scary to recall through this book has easily civility completely collapses.

On the other hand, Roman is a remarkable narrator. He has a fierce loyalty to his mother, expresses no great fear of death, and even describes the cute girls he meets along the way that he falls for. Imagine having a teen-age crush in the middle of of the Final Solution! Roman shows little interest in politics, and seems most determined to be given the freedom to get back to doing what he wants to do most: living with his family, and enjoying girls, sports, and other activities that boys love.

Throughout the book, Roman describes vividly how savage the Nazis were — but also how bad the Polish police, the Soviets, and even some American soldiers were at times. He also recounts the acts of kindness that enabled him to survive. In that sense, this is an inspiring book, and not a depressing one at all.

Those who have survived genocide, whether through the Holocaust or other attempts at mass murder, should do exactly what Roman did, and put their recollections down on paper. History desperately needs more memoirs like this one, so we’ll never forget.

But even as a memoir, as a historic nonfiction novel, as a snapshot of a devastating moment in time, “Hanging Hitler’s Long Johns” is a remarkable book by a very courageous survivor.

“Hanging Hitler’s Long Johns” is a 215-page book, published by Comteq Publishing, and is available in hardcover or as an eBook.