ORLANDO — The title of the play is “Gertrude And Claudius,” but I imagine the production could have worked equally well being titled “”Amieth And Claudius.”

The play that was commissioned by the Orlando Shakespeare Theater, and which opened on Friday, is a prequel to Shakespeare’s Hamlet. It tells an interesting if rather straightforward tale of revenge, adultery and murder. Adapted by playwright Mark St. Germain from the best-selling novel by John Updike, the play aims to provide insights into Hamlet’s parents, unveiling the behind-the-scenes drama of how Hamlet’s mother Gertrude would fall in love with her brother-in-law, Claudius and come to marry him, and what Hamlet’s father Amieth, presented throughout the Shakespeare play as a ghost, was like as a ruler.

And while actress Page Lindsey White as Gertrude, and actor Gene Gillette as Claudius, have some very fine scenes together, the stage is positively electrifying in the second act when Amieth confronts his adulterous brother for having betrayed him. Clear and away the best scene in the production, the acting by Gillette and Kenny Babel as Amieth is raw, intense and thrilling. You almost wish the two brothers had spent far more time feuding from the opening scene.

What is Gertrude And Claudius About? 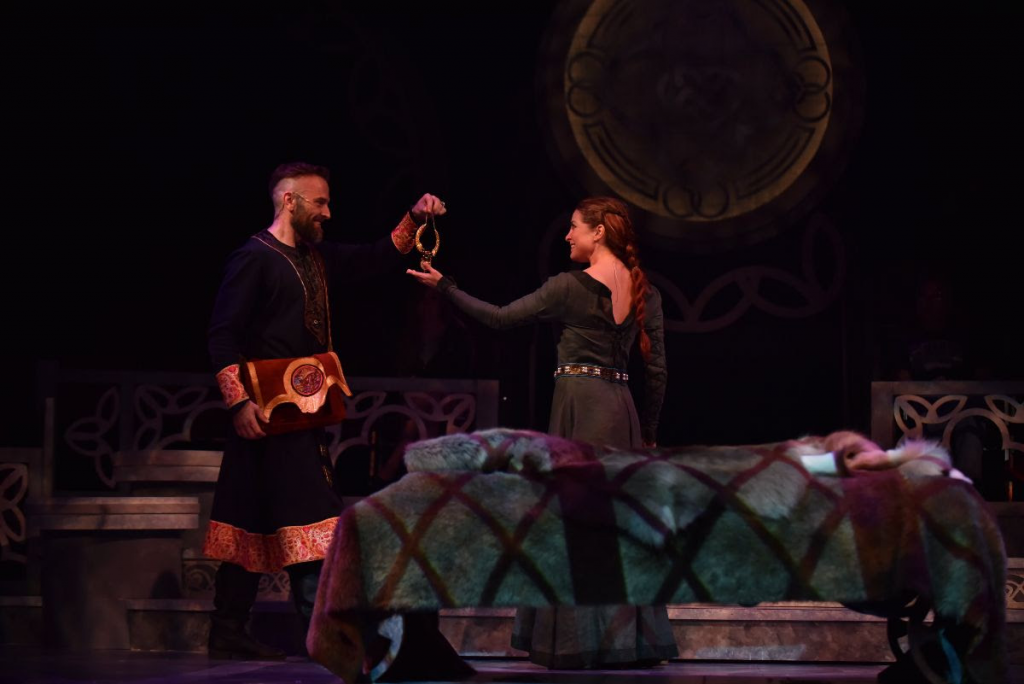 The play, which has been in development for several years, is being presented at the same time as the Shakes’ production of Hamlet, which returns in March. Anyone who knows Shakespeare’s play and has ever wondered why the ghost of Hamlet’s father haunts him and urges him to exact revenge for his death will get some concrete answers in “Gertrude And Claudius,” which uses a large cast to tell a story that may seem predictable, but has one of the most riveting second acts that I’ve seen in a while at the Shakes.

Updike’s novel and the play are set in medieval Denmark. Young Gertrude is forced to accept an arranged marriage to Amieth, a warrior expected to become ruler of Denmark. The beautiful young Gertrude finds herself married to a man who is honest and kind, but crude and boorish; Babel does a particularly sharp job of making Amieth seem like a man that not many would want to marry, even though he’s anything but cruel or abusive — an ironic comment on a marriage to a man that Gertrude appears to respect but never to love.

A lot of her passion instead goes into the child she gives birth to, Hamlet (who is only seen on stage a few times, as a boy, and then a teen.)

On the other hand, for as unrefined and rough as Amieth is, Gertrude’s brother-in-law Claudius, returning from extended travels abroad, is quite dashing and charming. It’s instantly clear that he’s the exact opposite of the crass and loutish Viking raider she’s married to. It’s Claudius who seems to fall in love with Gertrude first; whether she’s actually as quick to fall in love with him, or is repressing her feelings because of her marriage, isn’t entirely clear. But Claudius keeps pursuing her, and eventually, scruples and morals are the last thing they’re concerned about.

Not surprisingly, their affair is eventually discovered. While Amieth had seemed absorbed in state politics, he appears to have kept his ears to the ground, and his confrontation with his brother — now determined to take Gertrude away from him — is stunning.

What Makes This Play Work So Well? 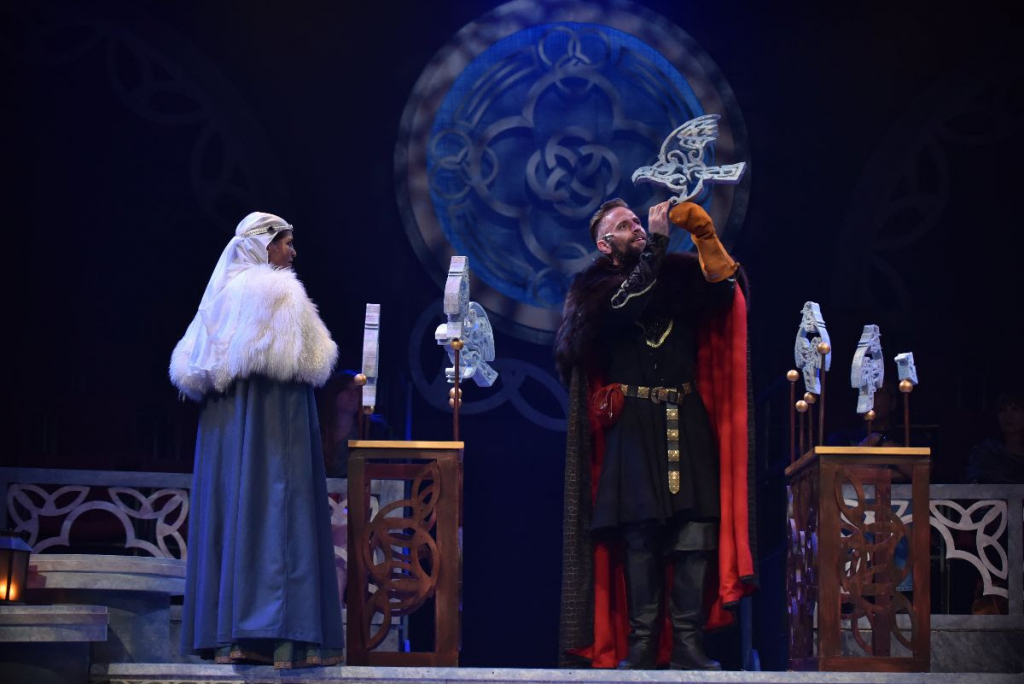 The play uses a large cast of nearly 20 actors (who are also being used as the cast for the Hamlet production,) and while there are some very fine supporting roles, this is really a three character drama (interestingly, that excludes Hamlet himself). In the first act, we watch Gertrude’s marriage to the kindly but unattractive Amieth, and her budding friendship with Claudius, knowing full well where they’re headed.

And there’s a particularly good scene where Gertrude and Claudius, on a romantically snowy day, ride out on horseback to the countryside together, the first sign that they’re moving into a darkly forbidden romance. While you know exactly where the plot is headed, there are still some tense fireworks awaiting you.

One of the interesting challenges that director Jim Helsinger and his crew likely faced is the relationship to the original source, meaning Shakespeare’s play Hamlet, not the Updike novel. Is a passion for Hamlet required to appreciate this story? Does much of our interest in “Gertrude And Claudius” depend on how familiar we are with the original?

I’d say not really, since “Gertrude and Claudius ” is able to stand on its own and create complex, even sympathetic figures and establish their motivations in a clear and believable way. In fact, while White is excellent as Gertrude, Gillette really shines as the debonair, raffish Claudius, who knows he’s more handsome and cultured than his brother. It was fascinating to me the way Gillette’s character became less and less sympathetic as the play went on, while Babel’s character became the opposite — a great compliment to the depth that both actors bring to their roles.

And by the end, as Gertrude becomes haunted by the ghost of her dead husband, the production has a far more epic feel than it initially did.

“Gertrude And Claudius” is now being performed at the Orlando Shakespeare Theater at 812 E. Rollins St. in Loch Haven Park. The play runs for two hours and 30 minutes, with a 15-minute intermission.

The production runs through March 23. There will be a Talk Back Performance on March 10 at 2 p.m. Following that matinee show; the audience is invited to stay to chat with the director and members of the cast about the production.

Fringe Preview: Chris Turner Bringing His Freestyle Rap to Orlando Fringe in May
Stay in Syria, Hoda: The Welcome Mat is Gone