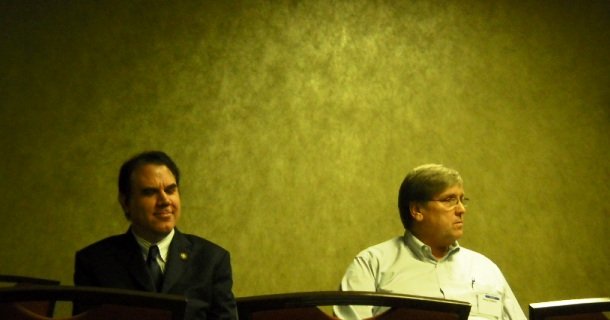 ALTAMONTE SPRINGS – They may be on opposite sides of the political spectrum, but the liberal former Congressman Alan Grayson and the conservative anti-tax activist Doug Guetzloe agree on one thing: the sweeping victory that Republicans scored in 2010 is about to meet its match in a process called redistricting.

Grayson, who represented the state’s 8th Congressional District until he was defeated last November, and Guetzloe, the founder of Ax the Tax and host of The Guetzloe Report radio talk show, took part in a debate on Saturday at the Hilton in Altamonte Springs, as part of the regional gathering of Mensa, the worldwide organizer for people with high I.Q.s.

While the two political activists had their disagreements, they did see eye to eye on the issue of congressional redistricting: namely, that Republicans have a lot to lose in 2012 by the time this process is over.

Redistricting is the process whereby state lawmakers redraw the lines of the state’s congressional, state senate and state House districts to reflect shifts in population.  Districts that gained a lot of new voters need to be reduced, while districts that lost population take on new residents.

But it’s always been a highly political process, with the dominant party in Tallahassee drawing the lines to maximize partisan advantage, creating districts that have less to do with geographic interests than with how many registered Republicans or registered Democrats can be squeezed together to ensure that party wins the seat.

Republicans now control the state Legislature by two-thirds margins and the governor, Rick Scott, is also a member of the GOP, which would have given them complete control over the process.  But last November, Florida voters approved two constitutional amendments called Fair Districts Florida, which require the congressional districts and the legislative ones to be drawn up so that communities are kept intact, and partisan politics stays out of it.

“It said you cannot draw the lines on a political basis anymore,” Grayson said.  “Today the Republicans have overwhelming majorities, thanks to previous gerrymandering. This will make the districts more compact.”

If Republicans in the state Legislature fail to follow this rule and instead create districts designed to boost their own party, the lines will likely be drawn from the state Supreme Court.

Guetzloe said he predicts that’s where the issue will be settled next year.

Every 10 years, the states are required to redraw the lines of the nation’s 435 congressional districts. States that lost population or experience slow growth lose districts, while states that gained the most new residents pick up new districts.  It’s already been estimated that Florida, one of the nation’s fastest growing states in the past decade, will gain two new congressional districts, bringing the state’s total up to 27.

Grayson and Guetzloe believe Central Florida – and more specifically, the Orlando metropolitan area – is one of the regions slated to get a new district.

He also predicted it would be a heavily Democratic district, since all of the congressmen in this region now are Republicans. That includes John Mica of Winter Park, Sandy Adams and Bill Posey of the Space Coast, Dennis Ross of Lakeland, and Daniel Webster of Orlando, the man who defeated Grayson.

As Guetzloe noted, Ross and Adams represent districts where registered Democrats outnumber registered Republicans.  To create another solidly Republican district, lawmakers would have to peel off crucial Republican votes from each of these congressmen.  A safer choice, he said, would be to take as many Democratic voters as possible out of these districts and create one overwhelmingly safe Democratic districts — which in turn makes the neighboring districts even more safely Republican.

Grayson noted that Republicans did this in the last round of redistricting, when they created a safe Democratic seat in the Tampa area, now represented by Democrat Kathy Castor, even though the Tampa area is fairly evenly divided between the two parties.

If the state Supreme Court takes the partisan edges off the districts and makes them more competitive between the two parties, Grayson predicted that could result in “four to six additional Democratic seats” next year.

Grayson said his own district was a good example of gerrymandering, since it took in a good chunk of the city of Orlando and parts of Osceola County, but also stretched out to solidly Republican precincts in Lake and Marion counties.

“It went all the way from southeast of the airport to 20 miles past Ocala,” he said.  “They did that because they wanted to create a safe Republican district.”

It didn’t work in 2008, when Grayson defeated Republican incumbent Ric Keller and Barrack Obama carried the district in the presidential race.  But two years later the GOP bounced back, and Webster, a former state senator, won with 56 percent to Grayson’s 38 percent.

Grayson said it’s not clear if this was a lasting political shift or a temporary one.

“We saw an enormous swing from the Democratic Party to the Republican Party,” Grayson said.  “The whole country went from plus-8 (percentage points) Democrat to plus-9 Republican. Is it a permanent swing, as in Roosevelt’s time? It’s too early to say.”

Freelining with Mike Freeman: On being a bad (or is it good?) drinking companion
World traveler has advice on Living an Incredible Life