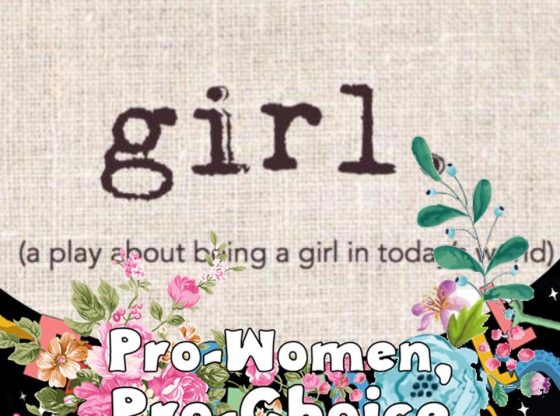 ORLANDO — The play Girl opens quietly, as a teen named Hannah comes onto the stage to talk about her life — and we’re a very long way from Gidget here. She’s blunt, matter of fact, but never shrill as she talks to the audience about her life — one that’s anything but calm or sunny.

That same quiet tone stays with this production as it takes us through two other stories, another one involving a young woman alone on stage describing her troubled life, and the other about a teenage girl and her relationship with her mother and boyfriend. The acting is stunning throughout, in part because some of the subjects — drug addiction, suicide, rape and teen pregnancy among them — are so painful to deal with.

But make no mistake, this is not a depressing piece at all; it’s a show that’s going to haunt you long after you’ve seen it, raising plenty of questions in your mind — not the least of which being whether we now let teenage girls just tossed into the adult world far too quickly. What happened to the days when her biggest worry was getting invited by the cutest boy to the prom? That seems like the stuff of embarrassingly outdated TV series.

What is Girl About?

Girl, written by Megan Mostyn-Brown, is a collaboration between Daytona State College Theatre and Beth Marshall Presents, the theater company run by Beth Marshall, who directed this outstanding drama. The play, which is being performed at the Orlando International Fringe Theatre Festival, offers a very frank look at three young girls who find their lives turned upside down by situations that range from comical to unsettling to harrowing. But they’re linked by one thing in particular: it seems clear that all three are survivors, and while they’re being forced to grow up far too quickly, they appear capable of doing just that.

The play has three segments. The first, and perhaps the most powerful of the three, is “Things You Can’t Tell Just By Looking At Her,” featuring Chloe Shaw in a truly staggering performance as Hannah, who lives with her sister and mother. Sounds simple enough, except that her sister is a drug addict who often sleeps in abandoned buildings, and her mother is overwhelmed trying to cope with her. As the quieter sister, Hannah is the one being ignored by her mother, but don’t assume Hannah is the one who has her act together. Dealing with her emotionally absent mother and car wreck of a sister has transformed Hannah as well, into a teen who becomes agonizingly obsessed with self-mutilation.

These scenes are often painful to hear, but Shaw is never maudlin; there are few moments in the play as quietly powerful as when she describes her trip to the abandoned building her sister had been living in, and then walking in the rain to a nearby bridge, high enough for a successful suicide attempt.

The second piece, “We Did What We Could With What We Had,” is about the relationship between a teenage girl Lucy (played by Alexa Carroll) and her mother (Sierra Vennes), who raised her without a father, and now finds their relationship strained by Lucy’s attraction to a boy at school, Isaac (Matthew Gray.) The themes in this one are not nearly as gut-wrenching, and that’s a welcome break. This segment is often quite humorous, in fact; Isaac falls for Lucy as he comes to see that she’s like an avocado — rough on the outside but tender inside — and he wants her to run away with him to California. Carroll, Vennes and Gray all perform beautifully in this one.

The final segment, “Lessons I’ve Learned,” tells the story of Lydia, who likes a handsome young man who has a girlfriend; but that attraction turns poisonous when he attends a party without his girlfriend, has far too much to drink, and then comes on to Lydia, pushing her into a bedroom. Lydia’s quiet descriptions of the traumatic event that follows, and the consequences of that act, are heartbreaking and very affecting, bolstered by a superb performance by Rachel Comeau.

Girl is a deeply emotional and moving production, and while Fringe may be known primarily for lighter fare, this is one you definitely don’t want to miss.

Girl is being performed in the Gold Venue at the Orlando Museum of Art. Upcoming show times are:

The play runs for 75 minutes. Tickets are $12 and you need a Fringe button to get into the shows. Order tickets at Orlando Fringe online.