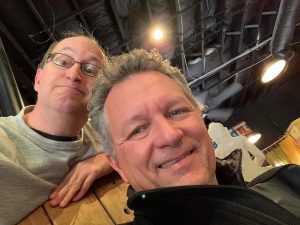 The conversations are loud, highly opinionated, and always G-rated (yeah, right). They’ve never been asked to leave the premises because of crude or obnoxious behavior (hey, the night is young), and they once thought about turning their happy hours into a stage play, where they would walk on stage, sit down and drink, and … do their regular HH thing.
Starting out initially at the White Wolf Café in Orlando’s Ivanhoe Village neighborhood, they have shifted location several times over the years, and currently reside at Lil Indes, a chic bar in the Mills 50 District (where Michael also lives.)

Michael and Mel lived for five years in a historic house in Swansea, Massachusetts … that was haunted. The house, a Colonial built in 1889, was located on a pond, and was right across the street from a graveyard.

Their property also turned out to be the site of a burial ground for American Indians killed in the King Phillip’s War in 1675. They lived at the house from July 1996 to April 2002, and there were so many eerie paranormal activities within its walls that Michael kept a ghost encounter diary, recording each spooky happening.

Here is an entry from February 17 2000: “It’s 8:30 in the morning. I’m on the second floor, in the computer room, signing off online. Mel has already gone to work. Then I hear the front door open. A male voice says ‘Hello, kitty cat.’ I figure Mel has returned. I get up, walk to the top of the stairs, and yell ‘You decided to come back home?’ I never got an answer. I was alone in the house.”

Here is an entry from August 19, 2001: “I spent the morning cleaning the house while Mel was at work. I jumped in the shower. A few minutes later I heard something rush up the stairs. I figured it was one of my cats, so I peeked out the edge of the shower into the hallway, and it was empty. A moment later, the edge of the shower curtain began to rustle, which is odd, since there was no wind outside to blow it. Then it happened: beyond the dark blue curtain, I saw a person walk into the bathroom. I frantically pulled the curtain aside, my heart pounding. There was no one in the room but me.” 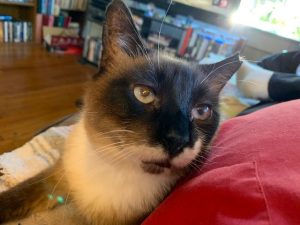 When Michael and Mel first moved to Orlando in April 2002, they brought six cats with them from Massachusetts. Sadly, all six have since passed away.

Michael has adopted seven more cats in Florida over the years: Whitey, Squeaky, Heather, Crabby Tabby and Peaches N. Cream (who also have passed away); and Fluffy and Daphne, who live with him today.

Daphne is very sweet and affectionate and absolutely loves curling up next to Michael on the couch.

Fluffy is a bit wild and precocious, and finds endless pleasure terrorizing birds, squirrels and lizards.

Fluffy and Daphne both hate the cold.

I eat …
Anything. Ask Mel. Past exotics include alligator, kangaroo in Australia, raw duck in Montreal, and very raw Steak Tartare in Quebec City, Canada. Yum to each one, I say.

What I’d really prefer is …
A longer winter in Orlando.

I never wanted to be …
Hockey player. Nuclear engineer (like my dad)

I often owe my existence to …
Morning coffee, clean socks.