ORLANDO — The Orlando International Fringe Theatre Festival runs through Memorial Day at venues in Loch Haven Park, Ivanhoe Village and downtown Orlando. Orlando Entertains caught up with some shows and here are our thoughts on them. 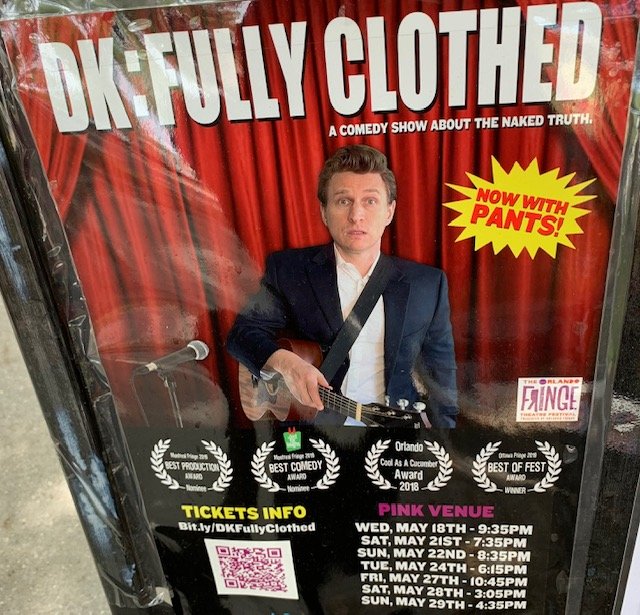 Billed as “A comedy show about the naked truth,” this monologue by comedian DK Reinemer is the perfect vehicle for his brand of audience interactive comedy, which includes sing along songs and fun props that mainly revolve around clothing.

The premise of Fully Clothed is DK’s decision to do a show where he remains fully dressed throughout the entire hour — which, of course, he doesn’t. But that prompts DK to reflect back on his very first “Fringe” shows appearing naked for the crowd, starting with his debut as a baby running up his street without a diaper on. Future mishaps involving packs of matches and a red ant hill contribute to his additional naked performances before the crowd.

The jokes are nicely boosted by the addition of his childhood clothing, which makes for some hilarious sight gags.

It’s impossible not to like DK’s relaxed, easygoing and witty style of humor, which seemed to draw out plenty of comments from the audience. One of the best improvisational gags during the performance I saw was when a woman in the audience noted that she was from Longwood. DK had a field day with that one word. He had similar fun when an audience member’s cell phone started ringing.

Totally enjoyable, DK Fully Clothed is being performed in the Pink Venue at the Orlando Shakes and will have its final performance today at 4:35 p.m.

I Lost On Jeopardy 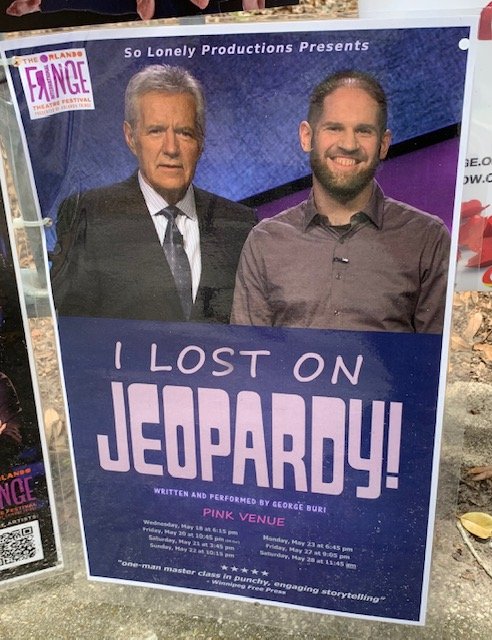 In 2017, George Buri, a teacher in Winnipeg, Canada, got an opportunity to live a cherished dream. As a major trivia geek and fan of TV’s wildly popular game show Jeopardy, he finally landed a chance to be a contestant, and he was leading right up until the final Jeopardy question — and then lost. Having become one of the show’s many one-time contestants, how did George cope with the misfortune of having lost due to one obscure question?

He created an incredibly funny Fringe show, that’s what.

Buri’s show, which had it’s final performance on Saturday, recounts the thrill of finally getting on his favorite show and the devastation of losing, but his show is about so much more. If you’re a Jeopardy fan, this is the one for you, because he gives the audience a backstage glance at how Jeopardy tapes its shows, what his two opponents were like, the reaction he got when he went back home to Canada, and even some fun gossip about the show — including the conspiracy theory that champion Ken Jennings, now a co-host of the show, may have deliberately blown his final appearance because he was tired of continuously winning. Who knows?

This was absolutely one of the best shows at Fringe this year. Fringe typically attracts a lot of solo shows, and they can be a mixed bag. But if there’s one thing Buri demonstrates, it’s that if your main topic covers a universal theme that anybody in the audience can relate to, you’re more likely to have a successful show. Who can’t relate to the idea of finally getting a lifelong dream of being on a popular show, and the heartbreak of losing?

But this play is even more engaging because, while Buri may have failed as a game show contestant, he succeeds wildly as a live performer walking us through his very engaging story. He has the perfect persona for making this show laugh out loud funny, and turning his loss into a theater show was truly a brilliant idea.

Michael Freeman is an Orlando journalist, playwright, and author of the book When I Woke Up, You Were All Dead. Contact him at Freelineorlando@gmail.com