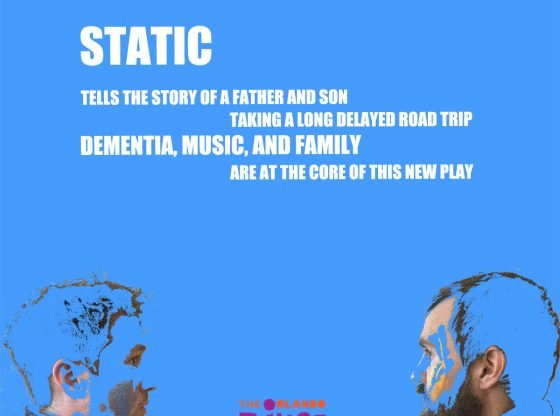 ORLANDO — Expect a lot of diverse shows when the Orlando International Fringe Theatre Festival kicks off in May, and to get a sense of just how creatively diverse this festival is going to be, talk to Daniel Amedee.

This musician and actor from New Orleans has toured Ireland as part of the rock band Remma, released his own solo LPs, and is now headed to Orlando Fringe with his play Static. It’s a musical, but one that combines the music with a touching story about a father and son taking a long delayed road trip while dealing with the father’s late stage dementia.

As Daniel noted, the show is “equally heartwarming and haunting” while combining live music with theatrical staging and digital projection “to craft a unique experience sure to leave you heartened and shaken.”

The show is the work of playwright Conor Kelly O’Brien, who created it after hearing Daniel’s music. O’Brien has worked Off-Broadway with The Actors Company Theatreand their production of the classic black comedy Arsenic & Old Lace, and he’s acted in television roles on The Deuce and Mysteries at The Museum, while also serving as the co-founder and director of the Scranton Fringe Festival. He’s also a member of the New Vintage Ensemble.

Freeline Media reached out to Daniel to learn more about Static and what Fringe audiences can expect.

What Is the Play Static All About?

Freeline Media: Is your play Static intended to be a mix of drama and music, in a way that’s perhaps different from the traditional concept of a musical production?

Daniel Amedee: The play came about in a rather non-traditional way. I’m originally a musician and had written the music as an album for my band LIGHT SOUND, and I sent the record on to Conor because I wanted him to come on the road as a manager, but he had the idea of taking the songs and weaving a narrative through them. I thought that was a brilliant idea and left him alone for a few months while he wrote the play. When we started rehearsals I didn’t know what the play was going to be. So it wasn’t really intended to be different from traditional productions, but its conception was so unique the finished product had no choice but to be.

FM: How did you come to collaborate with Conor Kelly O’Brien?

Daniel: I met Conor in 2014 when I was on tour. He booked my first show in Scranton, Pennsylvania and we’ve been friends ever since. Conor and I had talked about touring together over the years. He wanted to go on the road from a PR/manager perspective, getting out in the different scenes and meeting people. So the collaboration began as me asking Conor to come on the road and him having the idea to collaborate.

FM: You described your play as “the story of a father and son taking a long delayed road trip while dealing with the father’s late stage dementia,” which sounds fairly dramatic — particularly for a theater festival where comedic productions often rule the day. What would you like to say to Fringe audiences about why they definitely should see Static in May.

Daniel: Our play definitely has some weight to it … but from the audience reactions we’ve gotten in the past, there’s something there that resonates with people. We all go through these movements of life, the ins and outs, the struggle with family and communicating with the ones we love … No one has an easy road of it. But the play, I think, hones in on two universal things, love between people and the way we cope with the hard things in life. We hope our little father/son story resonates with the core truths of what people live.

FM: Tell us a little about your own background in music and stage productions.

Daniel: I was born and raised in New Orleans, so music was always a present thing in my life. I was a theater major in college at LSU for a couple of years but dropped out in 2008 and moved to Ireland because I had the opportunity to play bass in an indie rock band called Remma. We had an EP produced by Noel Hogan of The Cranberries and toured all over Ireland and the U.S. from 2009-2011. Then I moved back to the states and started touring solo. I toured all over the U.S. and Canada and released two full lengths and two EP’s under my own name from 2012-2016. Then I took a year off from the road and started LIGHT SOUND. That was around the time Conor and I started making plans for the play. So my main background is in music — but theater has always been a major interest.

FM: After you score a hit at Orlando Fringe, where is Static headed next?

Daniel: We’re doing the East Edinburgh Festival, Off Broadway at 59E59 Theaters at the end of July and then taking the play to the Edinburgh Fringe Festival for August. Conor and I also want to take the play to the World Fringe Congress in Adelaide, AU in February / March of next year, but that’s so far away I can’t really wrap my head around it.

When Is Static Being Performed?

Static will be performed during Orlando Fringe in the Purple Venue at the Lowndes Shakespeare Center, 812 E. Rollins St. in Loch Haven Park. Show times are:

Tickets for all shows are $12 except for the May 21 production.

To see a preview of Static, visit their video at YouTube.

Holocaust Center Condemns Horrific Attack in New Zealand
Solar Power in Florida: Is It the Next Great Energy Source?