Fringe Preview: Get ready to #Celebrate with Corsets & Cuties Cabaret 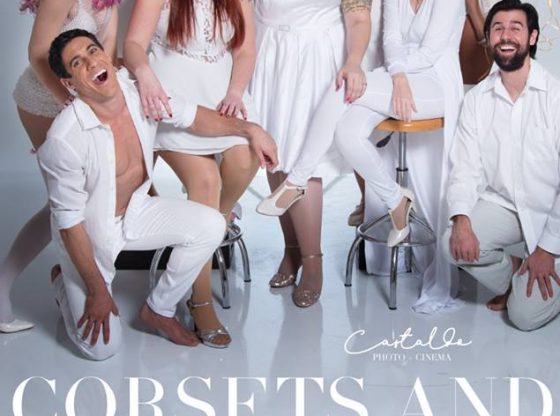 ORLANDO — Every year when the Orlando International Fringe Theater Festival kicks into gear, there’s an incredibly diverse number of shows, offering audiences comedy, music, dance, magic, and plenty of surprises along the way.

In fact, the nearly three-week long festival in May feels very much like a celebration of every to do with theater and performing … so it’s appropriate that this year, one of the shows, Corsets & Cuties- A Burlesque Cabaret, has incorporated that theme into their production. “#Celebrate!” is exactly what the performers in Corsets & Cuties are asking the audience to do.

What is the Corsets & Cuties Show?

The Cuties troupe is returning in May for their fifth year of Orlando Fringe fun, and will have four performances in the Black Venue at The Venue, the theater at 511 Virginia Drive as part of Fringe. This year’s show title is #Celebrate!

Corsets & Cuties had its premiere in August 2014 with a sold out show at The Venue. The “Cuties,” as the burlesque performers are called, are lead by founder Lady Jaimz, a recipient of Orlando Fringe’s 2018 Veteran Producer of the Year. They aim to create a vaudeville style cabaret “that’s all inclusive with the message to not just watch but be a part of the party,” Lady Jaimz noted.

Freeline Media reached out to Lady Jaimz to find out more about the show.

What Can Audiences Expect in May from #Celebrate?

Lady Jaimz: While we usually don’t theme our year-round shows, we’ve found it’s easier for patrons to identify us with a title. I chose #Celebrate this year since we’re going into our fifth year in the Orlando Fringe, and in August we’ll have our 5-year anniversary as a troupe at The Venue. It’s been a long, weird, wonderful road getting here and I’m so lucky to do this with my best friends. We just want everyone to party with us!

FM: Seriously, though, what’s the creative process like when putting together a burlesque cabaret? Tell us about how you came to settle on this show’s unique mix of song, dance, and whatever else you plan to throw in.

Jaimz: Ooph, the creative process, hahah… kinda like a hamster forever spinning on a wheel while music plays and disco lights flash. I have a long-time improv background that’s given me the base to make shape of show important. You have to start out with a grabber, give some highs, give some lows, go out with a bang and send them off wanting to come back for more. I don’t want to have the same thing each time. It would bore the performers and the audience alike. So I leave it up the each performer to choose something that inspires them for their solos. If they don’t love what they’re presenting, the crowd will know it.
For group numbers it’s a mix of suggestions from the troupe, show tunes that I’ve loved forever, something I hear that grabs me – whatever it is I need to have a strong connection to it and see it staged in my head giving the feeling of what I’m trying to express. Thankfully, we have a collaborative mind during rehearsals to bring it all to life.
It’s maddening at times to get everyone on the same page, but in the end we all work together to put up something we’re really proud of – no matter how ridiculous it is! At each show it’s also important to me to have guest stars from within the community. We’ve had other burlesque performers, cabaret staples, other Fringe artists, magicians, belly dancers, violin players, aerial acts … I always want something a little different that also helps promote others in their art.

FM: Of your 2014 show, one critic wrote, “Not for the faint of heart.” That sure got our attention. Details, please.

Jaimz: Haha, ohhhh everyone’s a critic. Look, we come right out and tell everyone, we’re the class clowns of burlesque in Orlando. We don’t take ourselves seriously but we’re serious about what we do. We represent all types in our show – fat, thin, short, tall, young, old, gay, straight. If you have a passion, want to be a team player, and need to be on that stage to show us your dream … then do it! After every single show I have people ask me how they can be a part of it. That’s why we have an Amateur Contest every year. People come see us and see themselves doing this because we empower others as we empower ourselves by performing. And yes, sometimes that’s shocking for people not used to brazen honesty.

FM: You’ll be performing this show at The Venue. What do you like about that Virginia Drive theater space?

Jaimz: The Venue is home. (Venue founder) Blue Starr has been nothing but the best mentor and example I hope to follow, not only in the business of the show but in support, encouragement, and nurturing of others. None of us would be where we are without her and The Venue staff. It’s a quirky space for quirky people who want to celebrate — there’s that word again — they’re weird, and in return we’re embraced and lauded for it. Not only is it a venue but it’s a community, it’s a family, it’s a safe space. Regardless of the actual building, when 511 Virginia Drive is torn down in September you can sure count on one hell of a phoenix rising for all of us to continue on with what we do, together.

FM: Some people think vaudeville died decades ago (thanks to that radio and TV stuff), but others say vaudeville lives on. Sounds like you’re in the latter category

Jaimz: No way has vaudeville died! It’s everywhere, you just have to redefine your definition. It’s in Saturday Night Live and variety shows still going strong on TV and cable, outlets like Netflix, Hulu, Amazon Prime. Touring comedy, music, magic, and dance events. Look at YouTube, podcasts, and Instagram bringing us all these new types of entertainment thinking outside the box. Vaudeville doesn’t have to be an old-fashioned mind set anymore. It’s theatrical entertainment of mixed acts bringing comedians, singers, dancers, acrobats to the masses. And we’re just happy to be a little part of that delicious pie.

Corsets & Cuties — A Burlesque cabaret presents #Celebrate will be a part of the Orlando International Fringe Theater Festival in May, with performances at The Venue, 511 Virginia Drive. The Orlando Fringe is the longest running Fringe Theatre Festival in the U.S., and this year the 14-day event runs from May 14-27 at the Lowndes Shakespeare Center in Loch Haven Park. To learn more, check out Fringe online.

The Corsets & Cuties production is being sponsored by Premier Couples Superstore.