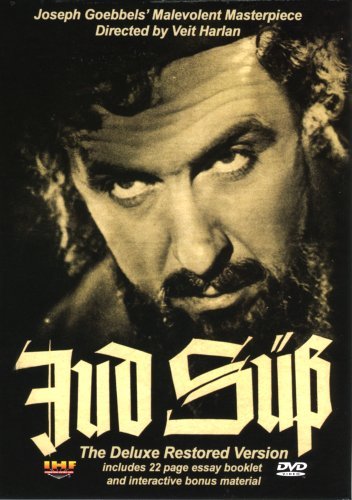 ORLANDO – It’s a truly bizarre and uncomfortable experience to watch the notorious Nazi propaganda film “Jud Suss” 78 years after it was first released in Germany, a lavish costume drama where the residents of a German empire are made to suffer after the introduction into their pleasant world of a cunning, conniving Jew.

It’s an absolutely scary film to watch, and not at all in the way that the filmmakers likely intended. Watching an angry German mob scream out “Jew!” in shrill, hate-filled tones, and demand not only his murder (by execution) but also the exile of all Jews from their village — and then to recall that this was a box office smash in Germany in 1940 — is like watching horror at its most grimly, painfully realistic.

Those blood thirsty mobs, of course, were meant to be heroes because they shared the Nazi party’s prejudices. The fact that these “heroes” seem so eager to blame all their problems on a single man who happens to be Jewish, and to eagerly support the separation of all Christians from Jews, offers a uniquely disturbing glimpse into what it must have been like in Germany in 1940, when the movie hit cinemas — and just two years after the November 1938 Kristallnacht, the Hitler-ordered destruction of Jewish temples and businesses in his campaign of brutality, intimidation and anti-Semitic rage.

As morally repellant as “Jud Suss” is today, it also seems invaluable as a historical document in much the same way that “Triumph of the Will” has been – perhaps more so today, in an age when leading Middle East figures like the former president of Iran, Mahmoud Ahmadinejad, have become vocal champions of the Holocaust denial crowd. (Holocaust denial, in fact, is the subject behind the play “Hoaxocaust,” which was part of the 18th Annual New York International Fringe Festival-FringeNYC in 2014.

What is the story behind ‘Jud Suss’?

Supposedly based on a true story from German literature, “Jud Suss” tells the tale of the new Duke of Wurttemberg who, upon assuming power in 1738, pledges to uphold his empire’s constitution. But the Duke has a taste for the good life and is frustrated when his council refuses to fund his requests for an opera, ballet and private security guard. He starts a minor business deal with Joseph Susskind Oppenheimer, a retailer in the Jewish district in Frankfort.

Oppenheimer will sell the Duke expensive jewels for his women at a low price, in return for allowing him to enter Wurttemberg’s capital, Stuttgart, where Jews are prohibited. The Duke agrees, and Oppenheimer makes a second offer: give him control of the local roads so he can tax them and help raise a handsome profit for the Duke.

Both men get rich taxing not just the roads but other goods, and soon the local residents are furious at the influence this Jewish businessman has on the Duke. They’re even more furious when Oppenheimer convinces the Duke to allow all Jews to enter the village.

The movie was ordered by Nazi Germany’s minister of propaganda, Joseph Goebbels, who wanted the German film industry to make movies with explicit anti-Semitic themes. What’s strange about “Jud Suss,” though, is that Oppenheimer, played by actor Ferdinand Marian, comes across as smart, charming, and visionary. The people who resent his success are mainly bland, hollow figures, simplistic twits who don’t do much more than scream “Jew!” whenever they see him. Despite the movie’s efforts to present Oppenheimer as an all-purpose villain, Marian’s excellent performance makes Oppenheimer a much more attractive figure than the rather lowly bigots who denounce him.

Even more bizarre to watch is the ways in which Oppenheimer advances all of the same political moves – and moral arguments – made by the Nazis themselves. When the people of the village rebel against the introduction of Jews in their lives, the Duke refuses to concede and kick them out. To hold off political opposition, Oppenheimer recommends that the Duke dissolve his council and appoint his own supporters as replacements – exactly what Hitler did when he assumed power and dissolved the Weimar Republic.

Oppenheimer also encourages the Duke to bring in a neighboring army, to help hold off the rebellion by brutal force – again, as the Nazis would do.

And when Oppenheimer is brought to “justice” at the end, after the Duke dies of a stroke, Oppenheimer is taken into custody and pleads for his life by insisting he was only following orders – a chilling defense, recorded on film years before the Nuremberg trials made a similar “defense” into a plea shared by thousands of former Nazi oppressors.

How Did the Movie Promote Hitler’s Anti-Semitism?

Taxing poor residents, ordering his enemies to be executed, and – oh, horrors – inviting plenty of Jews into the neighborhood apparently wasn’t villainous enough for the filmmakers, so they had Oppenheimer set his sights on a beautiful young Christian girl (gasp!). Aware that the Jewish finance minister has his eye on his daughter, the girl’s father hastily pushes forward her pending marriage to a handsome young Christian boy. To make Oppenheimer a truly vile monster, he orders the boy to be taken into custody and tortured (his fingers crushed under a nasty metal device) while Oppenheimer forces the young girl to listen to his screams, knowing that only one thing – some time in his bed – will save her husband.

Once she has been raped, the girl goes right out and commits suicide – sex-by-Jew being too horrendous too stomach.

It’s that sex act – and not all of his political schemes – that convinces the residents of Stuttgart to execute Oppenheimer by hanging – in an enormous iron cage, on a picturesque snowy night, like it’s a joyous Christmas Eve in Stuttgart.. His body is left dangling for all to see, including the husband of the dead girl, a look of smug and righteous satisfaction firmly planted on his face. And then the new leaders of Stuttgart announce that all local Jews have three days to get out, or ….

Hate as grand cinematic entertainment – all the world’s problems conveniently attributed to one ethnic group, and all their vile ways. If an ethnic group’s natural characteristics are to cheat, steal, rape and destroy all that is virtuous in the world, the movie points out, why not simply annihilate them?

“Jud Suss,” which is available on DVD by International Historic Films Inc. of Chicago, is not an easy film to watch, with its stomach-turningly bigoted message — any more so, perhaps, than the documentaries that have recorded archive footage from the concentration camps. But it does provide a useful understanding of how the Nazis sought to influence public opinion through popular entertainment.

Today, “Jud Suss” is less historical drama, political message or propaganda, than something else. In a strangely twisted way, it unintentionally turns into the ultimate horror movie, one about a mob of foaming-at-the-mouth anti-Semites who blame all their troubles on one Jewish man. It’s a brilliant look at the terrifying reality of mob-filled hate.