ORLANDO — It would be hard to imagine any ways in which Desiree Perez could improve on her electrifying performance as Billie Holiday in the Theatre Downtown production of “Lady Day at Emerson’s Bar & Grill.”
Perez is totally authentic and absolutely magnetic in the role — which is nothing if not an exceptionally challenging one. It isn’t just that she needs to recreate the persona, voice and mannerisms of a legendary singer whose works remain a staple of the Jazz movement and continue to excite audiences today, though she accomplishes all of that with ease.
What is even more remarkable about the role is that Perez is not just giving the audience the well-known Billie Holliday performing at a local nightclub in Philadelphia called Emerson’s — but a highly intoxicated Holiday.
And a Holiday who is falling apart, emotionally.
And the ability of this veteran Orlando actress to give us such a raw and devastating glimpse into Holiday’s crumbling soul makes this entire show an emotional knockout. Heavily drowned in the liquor she’s been consuming backstage before going to the microphone, Holiday is not content to merely sing for the audience. In fact, she’s quick to diss those who just want her to belt out those popular favorites like “God Bless The Child.” As the alcohol rips away the armored shell that a performer puts around themselves so they can be professional, charming, and distant, Holiday opts to go in a radically different direction. At first she is chatty. Then, confessional.
Finally, she looks like the scarred and scared survivor of a car crash.
And for every song she sings, with the inimitable voice that Holiday became so famous for, there lurks a moment right afterwards when Holiday opens up again for the audience, and we head back down into that uncomfortable journey into her past.
It packs a hell of an emotional punch by the end.
Theatre Downtown, in collaboration with the Greater Orlando Actors Theatre Performing Arts Ensemble, is now presenting Lanie Robertson’s rich drama, set in 1959, the year when Holiday died.
The show presents us with one of Holiday’s final performances, at a dingy urban bar. Theatre Downtown recreates Emerson’s as a dank place, where a pianist (played by Stephen A. Merritt) entertains the audience with some songs until he’s ready to introduce the main attraction of the night, Miss Holiday. But when he introduces her and she doesn’t appear, he’s forced to run backstage to find her. She finally emerges, a bit wobbly, with a drink in her hand. She walks up to the microphone, and looks out at the people who came to hear her sing.
It’s show time, folks.
Holiday died tragically young, at age 44, and if anyone wants to get an understanding of how that might have happened, “Lady Day” offers a vivid illustration of a life enriched with great talent and artistic success, but where racism, segregation and a legal system blind to prejudice took a very heavy toll.
The show, directed by Paul Castaneda, doesn’t feel at all like a straightforward musical tribute, although Perez does perform a number of Holiday’s standards, and quite beautifully with her rich voice. Rather, Castaneda ensures that the dark corners of that seedy bar start to reflect Holiday’s emotional revelations to the audience. The more comfortable she seems telling us what she’s been through, the more harrowing it gets.
And again, it would be hard to imagine any way in which Perez could improve on a performance that doesn’t feel one bit like an imitation of a legend, and every bit like a performer slowly falling to pieces – and taking us along for the ride.
The show, which is about 90 minutes long with no intermission, is going to haunt you long after the lights rise in the theater.
Theatre Downtown is at 2113 N. Orange Ave. in downtown Orlando. Performances are on Sunday, Sept. 21, Monday, Sept. 22, and Sunday, Sept. 28 at 7:30 p.m.
To purchase tickets, call 407-841-0083. 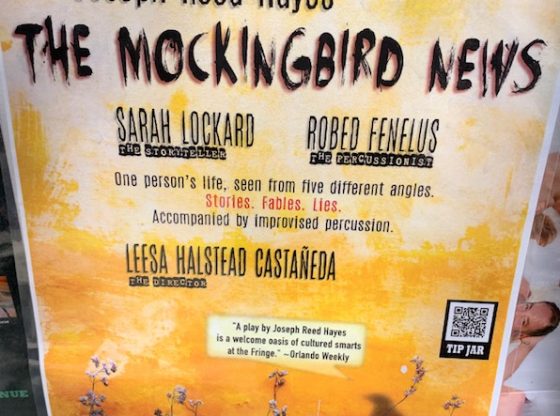 Poetry as Life in The…