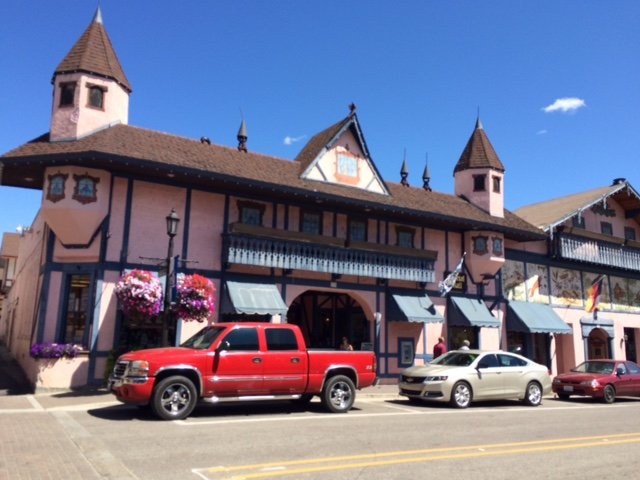 When I grow up, I want to retire in Leavenworth, Washington.

For those who know me, you’re probably wondering why I use the term “grow up” when I’m already in my 50s. Let’s just say that to me, retirement still seems like a long ways off — a decade or more, anyway. So being at that phase of life when retirement isn’t rushing up on me, but my youthful days are long gone, I start to dream. Once I’m past my working day, where do I want to settle down?

And I dream of Leavenworth.

If you’re not familiar with this absolutely charming place, Leavenworth, it’s a cozy city in Chelan County, Washington, with a population of about 2,000 people. And one of the things I love about Leavenworth is that the entire town center is modeled on a Bavarian village.

Yes, that’s correct; it’s a taste of German Bavarian culture in the Pacific Northwest. German restaurants, hotels with a Bavarian look and architectural style, gift shops selling the finest in German products. Located about two hours north of Seattle, it’s a little city I fell in love with the first time I went there.

By the early 1960s, Leavenworth’s economy was struggling due to a decline in the logging industry. Town leaders turned to something that a Floridian like me would instantly smile at: tourism! Two Seattle businessmen, Ted Price and Bob Rodgers, came up with the idea of creating a theme for the town, and the first building to be remodeled in the Bavarian style was the Chikamin Hotel, renamed the Edelweiss after the state flower of Bavaria.

As if that wasn’t German enough for us, how about the fact that Leavenworth also happens to be home to one of favorite shops, the Leavenworth Nutcracker Museum, which opened in 1995 and contains more than 6,000 nutcrackers dating from prehistoric to modern.

Whew! As a collector of nutcrackers going way back, I discovered I had a true kinship with Leavenworth from the get-go.

It’s also the home to an annual Oktoberfest celebration, another salute to Germany, and being located in the mountains, it truly looks like you’d made a happy stop in the Bavarian mountains of Southern Germany. I was completely charmed –and I was effectively sold, from my first day there.

Is This The ‘Grass Is Always Greener’ Syndrome?

Now, let’s back up a moment. I’ve been living and working in Orlando since 2002 — a city that a heck of a lot of Americans consider to be the ultimate retiree paradise.

Think about it: if I stayed in Orlando, I’d enjoy the beautiful Spanish-style home that I’ve lived in for the past decade, in Orlando’s very up-and-coming Colonialtown North neighborhood, and could continue to take advantage of the very things that literally thousands of people around the globe want to move here for.

It’s relatively easy to rattle them off:

Now — let’s revisit that last point for a second. I’ve been in Orlando for nearly two decades, and the only snow I’ve seen here was on TV early one morning as the cameras caught the lightest of flakes floating down under a street lamp.  It was gone by sunrise.

Usually the only snow I see here in December is in towns like Celebration, which create fake snow to charm the tourists.

And have I mentioned that a few years ago at my morning gym routine, I was watching The Weather Channel, and on this cold February day, they reported that 49 of the 50 states had snow. I figured the one exception was Hawaii.

I was wrong. The mountains of Hawaii had snow. Florida was the sole exception.

Did I mention the weather here from November through April is glorious?

Then Again, Leavenworth has Some Amazing Virtues

I’ve only been to Leavenworth in the summer, when it was dry and felt like Orlando in December. But being in the mountains, the locals tell me that cold, snowy winters are the norm here. One shop keeper told me they usually go below freezing by Halloween. She also told me that the city’s busy season is around Christmas time — but depending on strong sales then is risky. There’s a two lane highway going up the mountains, U.S.  2, that sometimes gets impassable in the winter months — because there’s a heavy snowfall.

That’s the kind of weather that gives us Orlando folks bad dreams. Do Floridians ever seek out winter wonderlands after experiencing a few Januarys in the Sunshine State?

So why would I want to retire in a place known for frigid temperatures and heavy snow shoveling, when I can stay where I am and enjoy walking around in a t-shirt all winter (well, actually a thick shirt and a sweater — I get very cold in 70 degree weather.)

Partly, it was that creature known as social media, which helped to further sell me on retired life in Leavenworth.

It was through Instagram that I discovered the page Leavenworth Tiny House Village, a page dedicated to a tiny house village in this Bavarian town, with stunning photos of these itsy-bitsy houses nestled in the mountains.

I had fallen in love again.

So I amend my first line: when I grow up, I want to retire in the Leavenworth Tiny House Village.

Tiny houses are all the rage these days. Simple living, cheap to build, gets all the clutter out of your life, no possibility of intrusive relatives moving in, no complications. My Orlando house isn’t large, only about 1,000 square feet, but I think I could downsize (as long as I don’t have to get rid of my cats.)

Tiny houses have plenty of fans, but they have their critics as well. Check out Lee Breslouer, senior writer for Thrillist, who is based out of Colorado and wrote:

“The obvious thing to do would be to find a place to build your tiny home, and then build it. Easy! But zoning laws often make that difficult, depending on where you live. Many of the same laws made to combat people living in their cars essentially outlaw tiny living.”

Ouch! The horrors of government bureaucracy!

On the other hand, Courtney Campbell in Country Living magazine noted:

“But according to a report from Realtor.com, smaller homes are actually appreciating in value faster than larger ones. The study found that homes under 1,200 square feet have appreciated at a rate of 7.5 percent a year for the past five years, whereas homes over than 2,400 square feet only rose 3.8 percent a year in value. As Millennials and Baby Boomers alike continue to seek more affordable housing options, we may see the property value of tiny houses increase even more—and see fears over who’s moving into the neighborhood dissipate.”

Besides, I don’t think I need to find a place to park my tiny home — I’ve got the Leavenworth Tiny House Village, which has surely dealt with those government bureaucrat rascals already.

So will I retire in Leavenworth in another decade? Who knows. Maybe this will be a pipe dream, like living in Paris.

But it does sound to me like finding a tiny home in Leavenworth won’t bust the retirement budget, the location will be spectacularly beautiful, my summers won’t be as hot and sweaty as in Orlando, and with so many retirees looking to move to the City Beautiful, I doubt I’ll have much trouble selling my home.

But right now my Crystal Ball is broken, so all I can do is wait … and dream.