Fear Not: Phantasmagoria is Back With a Reckoning

Home /Reviews/Fear Not: Phantasmagoria is Back With a Reckoning

ORLANDO — In a unique way, the troupe of performers in John DiDonna’s long-running Phantasmagoria franchise has demonstrated that the effectiveness of good, gripping horror has a lot to do with the atmosphere — even though the current installment, Phantasmagoria X: Reckoning, is mostly performed on a bare stage.

Ah, but that’s beside the point.  Theater has always been about asking the audience to go a step further, and use their imaginations for a while. It works, for two reasons.

First, if you’re new to Phantasmagoria, they’re a troupe of circus-like performers who recreate tales of horror from the vaults of classic literature. And many of those early writers were astonishingly good at vividly setting the scene for the reader — just as the actors in Phantasmagoria are exceptional at recreating those terrifying tales for maximum impact.

And they also benefit from the massive screen at the back of the stage that shows us graphic illustrations of the settings for each tale. A good example is when they recreate the Edgar Allan Poe story “Never Bet The Devil Your Head,” first published in 1841.

Our narrator introduces his friend Toby Dammit, a man of many vices who is fond of saying “I’ll bet the devil my head.” One day while they’re out traveling, they reach a covered bridge. The illustrations are so lucid that you feel like you’re right in front of that bridge, watching the two men start to cross it. And as they do, they get stopped by a turnstile that inspires Toby to bet the devil his head that he can leap over it. The results, shall we say, are quite harrowing.

And as the cast expertly recreates this clever and often humorous tale, you can actually feel yourself on the bridge, observing Toby’s downfall. Classic horror literature may truly be, as they say, wicked old, but it still has the power to draw us in, much like a spellbinding ghost story told around the campfire. Phantasmagoria has always demonstrated a skill for bringing these tales to life on stage.

Playwright, director and actor DiDonna first launched Phantasmagoria a decade ago, and the play’s success around the Halloween season encouraged him to bring it back as an annual October show — although rather than reviving the original, DiDonna began creating new versions every year, telling new horror stories with each fresh installment. The cast sometimes changed along with the stories, but the main concept stayed the same.

Since then, Phantasmagoria has branched out, touring parts of the country, appearing at the Orlando International Fringe Theater Festival, and even becoming a Christmas show last December as they recreated perhaps the most famous ghost story of all, Charles Dickens’ A Christmas Carol. Regardless of how Phantasmagoria was first created, under DiDonna’s hand, it’s demonstrated the ability to grow, evolve, and recreate itself as it expands its audience.

And the 2019 installment, Reckoning, (which opened on Friday night at the Lowndes Shakespeare Center and will be performed there through Monday) has a special feel in that it’s also a celebration of a full decade of Phantasmagoria as a production and franchise unique to Central Florida. Anyone who thinks successful new shows can only get started Off-Broadway doesn’t know much about Phantasmagoria. 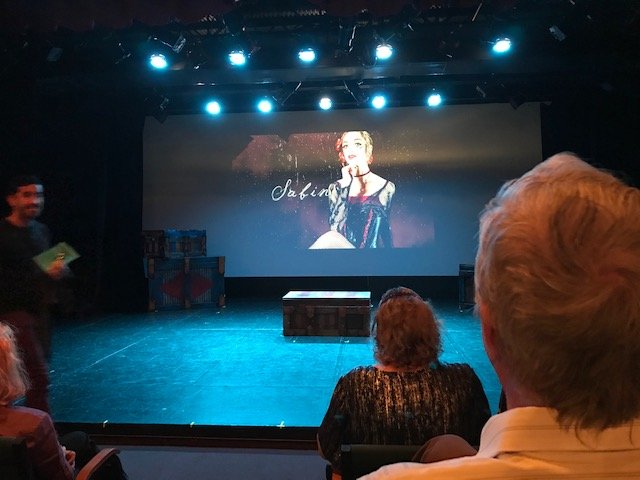 Phantasmagoria is, for all intents and purposes, a horror anthology. Like the best horror anthologies, it combines elements of humor (as they prepare to tell the Poe story, DiDonna points out that it’s very funny — prompting his fellow cast members to look a bit puzzled, but he insists yes — funny and scary) along with the horror, although some of the stories are more somber and insidious than others.

As the director, DiDonna (who got additional directorial help from Kevin G. Becker, Rebekah Lane and Seth Kubersky), establishes a repeating narrative pattern that moves the play along while drawing the audience ever deeper into the mystery of who these performers are, how they came together, and why horror fascinates them so. Their interactions form the link that holds together those tales of terror.

And several of them are quite evocative: A good example is “The Horla,” an 1887 story by the French writer Guy de Maupassant, about an upper-class gent struggling with feelings of anguish that intensify after he sees a Brazilian boat, waves at it, and then becomes obsessed with the notion that he accidentally invited a supernatural being from the boat to come into his home. He becomes obsessed with the idea that he can sense the presence of an invisible, ghostly being that he calls the “Horla.” He ultimately takes extreme steps to make it go away.

Another treat is “Wake Not The Dead,” written by Johann Ludwig Tieck around 1800, and unique as an early (the first?) vampire story, about a man who can’t cope with the death of his wife, and convinces the village sorcerer to use his magic to bring her back — with horrifying results.

And then we have the ghastly horrors of “The Singing Bone,” a German fairy tale and another reminder of how the Brothers Grimm were masters at documenting the true horror of our times: how appalling people can be to their fellow man. It tells the tale of a wild boar and two brothers set out to kill it, with the prize being the princess’s hand in marriage. When the younger meets a dwarf who gives him a spear that he uses to kills the boar, his older brother decides that he’s a particularly sore loser…

While each of these stories ends on a high note of grim terror, the wraparound story raises the bar even higher. Phantasmagoria effectively delivers its high-end horror to the audience, and it’s particularly rewarding to those audience members who enjoy letting loose their own imaginations and planting themselves deeply into the play’s dark, menacing settings.

Where Can I See Phantasmagoria?

Phantasmagoria X: Reckoning has elements of horror in the production and is recommended for children 8 and up.

The show will be performed at the following cities, theaters, and dates:

* ORLANDO at the Lowndes Shakespeare Center – Tonight, Sunday and Monday at 8 p.m.

Phantasmagoria Returns With Reckoning, and a 10-Year Anniversary Bash
Florida’s Red-Hot Economy: It’s Where The Jobs Are