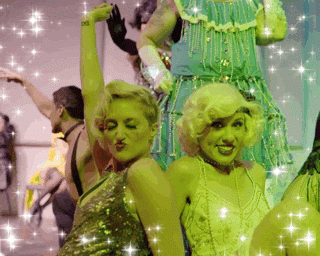 ORLANDO — As Michael Marinaccio put it, it definitely felt like the right time for a big party.

“We’ve really tried to focus a lot more on the party itself,” said Marinaccio, the producer of the Orlando International Fringe Theater Festival.

The party will be one aspect of Fab Fringe, their largest fundraiser of the year and an event that typically brings back one of the popular shows that appeared at the festival a year ago. This year, Fab Fringe is reviving El Wiz, the musical by Paul Castaneda and Juan Cantu that offers a unique update of “The Wizard of Oz.”

Fab Fringe will be held on Monday, March 4 at 6:30 p.m. at The Abbey in downtown Orlando, and as Marinaccio noted, expect a big party afterwards with food and live entertainment that you won’t want to miss.

What is Fab Fringe All About? 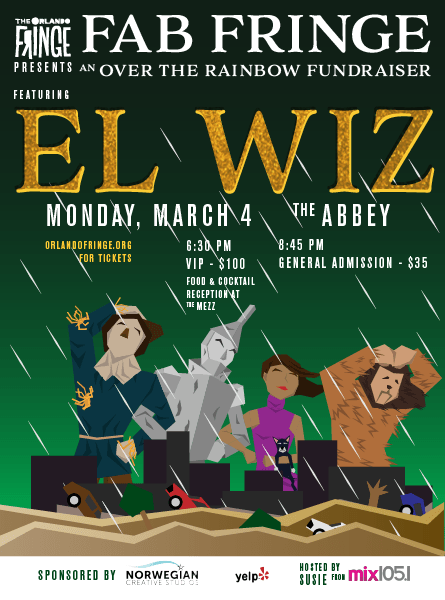 “Fab Fringe has been around for at least a decade, and it’s the biggest annual fundraiser that we do,” he said. “It’s all about bringing in some great shows that highlight what makes Fringe so great.”

This year, Marinaccio said, they decided to invite the producers of El Wiz to revive the musical that was first performed at the Orlando Fringe Festival in May 2018.

“It’s a show that debuted at Orlando Fringe, that is an incredible work,” Marinaccio said. “I was kind of stunned at how good it was. It took an old thing and made it new.”

El Wiz tells the story of Dorothy, a young girl struggling with soaring dreams and ambitions of living someplace bigger than San Juan, Puerto Rico, even though her close-knit family is with her. Then San Juan gets slammed by Hurricane Maria, the vicious storm that knocked out power to the entire island in September 2017, and young Puerto Rican Dorothy suddenly finds herself swept up by the storm and transported to a magical place ….

Marinaccio said El Wiz was a natural for a revival at Fab Fringe, since “We wanted to focus on original works that debuted at Fringe, and can then take off from there.”

What Was The Inspiration For El Wiz?

Castaneda said he was only too pleased to get the invitation to bring El Wiz back to Fringe as part of their annual fundraiser.

“We were asked by the Fringe to be their Fab Fringe fundraiser, and we agreed to do it — and we were honored,” he said.

For one thing, Castaneda said he and Cantu are now expanding the show — which initially ran for about an hour — to make it a full-length musical. The production that will be performed at Fab Fringe, though, will be the same one that debuted last May.

“It’s basically the same show we did at the Fringe last year,” Castaneda said. “It’s about an hour long, We will have some new cast members at this one. We’re excited to be a part of Fab Fringe. I’m a longtime Fringe participant, and even longer Fringe audience member and supporter. I remember when it was downtown and you had to walk to the venues. Now it’s great to be a part of something that raises money for them.”

Castaneda said he got the inspiration for the El Wiz production after watching the devastation that Hurricane Maria brought to Puerto Rico. Hurricane Maria, which struck on Sept. 16 2017, was a Category 5 storm that devastated Puerto Rico and is the worst natural disaster on record to affect the island.

“My writing partner Juan Cantu and I knew we wanted to put something in Fringe,” Castaneda said. “We were knocking around ideas for musicals that we could write, and El Wiz was one of them. The original concept was a funny idea from Juan that then he and I got serious about. The aftermath of what happened in Puerto Rico made the decision for us.”

They decided to update the story of The Wizard of Oz, only instead of a tornado that hits Dorothy in rural Kansas, it would be Hurricane Maria that strikes Dorothy in San Juan.

In the end, everyone involved in that production, he said, felt like they had come up with something special.

That’s why they’re now expanding it.

“We believe in this show,” Castaneda said. “We’re working now to flesh out the script and write new songs. We are very passionate about the topic and doing Latin theater.”

After Fab Fringe, El Wiz will be at the Dr. Phillips Center for the Performing Arts for the 5th Annual UCF Celebrates The Arts 2019 on April 5-14.

“It gives you what you need to keep growing the show,” Castaneda said.

Fab Fringe 2019 featuring EL WIZ will be on Monday, March 4 at The Abbey, 100 S. Eola Drive in Orlando. Valet parking will be available at The Abbey for $8. There is a 6:30 VIP performance and an 8:45 p.m. general admission performance.

General Admission tickets are $35, and the VIP Experience tickets are $100, which includes a VIP reception at The MEZZ following the performance, featuring food and drinks from local restaurants and live entertainment.

Feeling Sexy and Vibrant With the Basics: Lingerie
Fringe Preview: Chris Turner Bringing His Freestyle Rap to Orlando Fringe in May