Exposing the Underdog in Broadway’s The Full Monty

Home /Reviews/Exposing the Underdog in Broadway’s The Full Monty 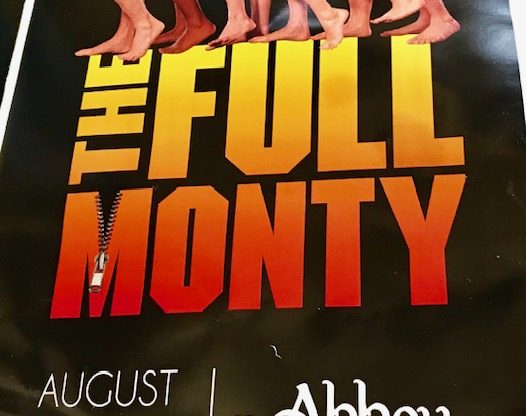 ORLANDO — When the women of Buffalo, N.Y., decide to spend a night out on the town, they head to a club featuring male exotic dancers. And I tell you, these middle aged ladies swoon like teenyboppers at the handsome guy prancing around on stage in a bikini that leaves very little to the imagination. Who cares if the guy is gay and therefore unavailable? He’s hot! And they’re loving every minute of it.

And then there’s … their boyfriends and husbands. In a rocky economy that’s led to heavy layoffs at their local steel mill, the men in their lives are … well, let’s euphemistically and politely say “in-between jobs.” And they’re not happy about lounging around the house all day.

I don’t think there’s any real surprise why The Full Monty, the 1997 British comedy film directed by Peter Cattaneo, became such a big hit when it was first released, getting an Academy Award nomination for Best Picture, or that it adapted into a 2000 Broadway musical where the characters and setting were Americanized.

One of the reasons why The Full Monty The Broadway Musical has so much enduring appeal, I think, is that the main characters are so average, and unexceptional. They’re just regular guys — average looks, average intelligence, and sometimes clumsy people skills. And they’re fed up with being stuck in a rut, so they come up with a plan to do something pretty radical — an idea with a high possibility of complete and total failure.

The bottom line is we can all relate to the idea of the underdog aiming higher, for one night of true victory. We empathize with their ambitions — and root for their success.

What Is The Full Monty The Musical?

The Full Monty The Broadway Musical was adapted by playwright Terrence McNally, with music and lyrics by David Yazbek, and it’s now being performed at The Abbey, the cozy theater in downtown Orlando. The show’s appeal is obvious:,the main message — if you feel down on your luck, shoot for something bigger — is universal.

The play follows best friends Jerry Lukowski and Dave Bukatinsky, who have joined a long line of former steel mill workers who now collect unemployment checks and wonder when they’ve ever going to find work again. But for Jerry, the situation is even more dire, since he’s behind on his child support payments, and could lose custody of his son Nathan.

Hearing the women brag about the hot male strip dancer at the local club, Jerry has an idea: if women will pay good money to see a striptease act, why couldn’t Jerry and Dave create their own male dancer act and make some good money at it? Dave think it’s a terrible idea, because — well, look at them! Dave is chubby and out of shape, Jerry is skinny, and neither one of them can dance. They’re not exactly in the same league as the hot male stripper who’s been wracking in the dollars at the women’s club.

But Jerry is insistent, and soon they’ve also recruited Malcolm, a lonely and introverted security guard at the steel mill who lives with his nagging mother, hates his life, and tries to commit suicide by asphyxiating himself in his car through carbon monoxide poisoning. Dave pulls him out, and he and Jerry convince Malcolm that there’s a bright light at the end of the tunnel — by being strip artists. Next thing you know, they’ve recruited a dance teacher and are holding auditions for other men to join the act.

The scene with Malcolm is indicative of the unique balancing act that this story takes: for men who feel their lives are going nowhere and can’t support themselves or their families financially, the emotional toll can be agonizing. And the story touches on subjects like depression and suicide — but never in a heavy handed manner. The approach is comedic — but entirely sympathetic. The more the guys struggle with the notion that they’re complete failures versus well maybe they can make this work, the more eagerly you root for them.

Does The Production at The Abbey Work?

The production at The Abbey, directed by local veteran Kenny Howard, captures that spirit of the underdog aiming for something better, even if what they’re hoping to accomplish — driving the women crazy by stripping — seems improbable at best. It gets even funnier, of course, when Jerry recognizes that dilemma and decides they’re going to have to go “Full Monty” — leave nothing at all to the imagination.

The actors do an exceptional job, particularly Brett McMahon as ringleader Jerry, Tad Kincade as Dave, and Eduardo A. Rivera as Jerry’s older-than-his-years son Nathan. And a real scene stealer is Wendy Starkand as Jeanette Burmeister, a wise-cracking, seen-it-all showbiz musician who assists the guys during their rehearsals, and always has a clever and philosophical quip about what they’re doing.

Good fun all around, and yes the actors do go full monty at the end — although the show very artistically covers them in a dark blue light just to be tasteful.

Where Can I See The Full Monty?

The Full Monty The Broadway Musical is being performed at The Abbey, located in downtown Orlando at 100 S. Eola Drive. It’s a cozy two-room theater, with a full bar in the lobby. Call 407-704-6261 for tickets and reservations.

Mistaken Identities and Great Humor in How To Marry A Divorced Man
Rags To Riches Glamour or Political Drama: Evita Has it All