Exposing the Silence at Auschwitz Through Unsilence

Home /Human Interest/Exposing the Silence at Auschwitz Through Unsilence 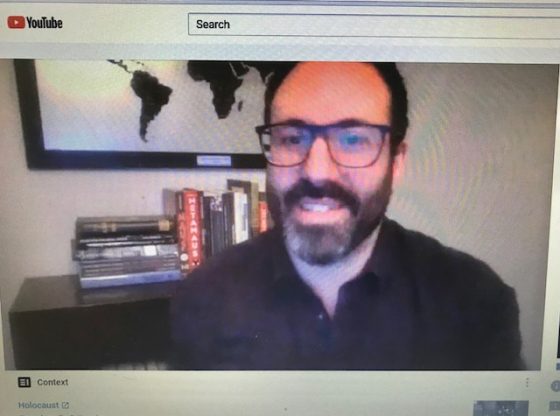 MAITLAND — Several years ago, Danny M. Cohen joined a group of academics for a trip to Poland, which included a tour of Auschwitz. Cohen, a Holocaust scholarship, began by touring Auschwitz 1, the section of the concentration camp that included brick buildings that housed the prisoners.

As they concluded that first day of the tour, an unusual thing happened after their tour guide asked if anyone had any questions. Two people did, and as Cohen recalled, the tour guide’s response stunned everyone. Today he uses that moment as a learning experience, to prompt discussions about a subject he cares about deeply: the need for an Unsilence about the Holocaust.

He added that there’s a need to continue talking about the Holocaust and understanding why some questions related to it are sometimes met with silence.

“Soon there will be a time when there are no witnesses to those events,” Cohen said.

Coehn recently took part in a discussion titled Unsilence Injustice – A Secret at Auschwitz, sponsored by the Holocaust Memorial Resource & Education Center in Maitland. Due to the ongoing COVID-19 crisis, the discussion was a virtual one.

Cohen is the founder and executive director of Unsilence, an educational program that aims to fill a gap in civics education, using storytelling and the arts to “unsilence” hidden injustices and marginalized voices. Their goal is to spark further dialogue, encourage critical thinking, and build empathy for others and inspire social change

Rachel Luce-Hitt, the education director at the Holocaust Center, noted that they’ve started a collaboration with Unsilence to “pull up these hidden injustices” in society today.

“This is just the beginning of this collaboration,” she said, while Cohen said he was pleased to have the opportunity to take part in a discussion about the different forms of silencing in society today that relate to the Holocaust.

“People are coming together to learn and talk about Holocaust history,” he said. As part of that, Cohen said he would begin by telling “a story I was told never to tell.”

What Happened During His Tour At Auschwitz?

Cohen spent a month in Poland, and his first day at Auschwitz ended with their tour guide asking everyone to turn in their headsets, then asking if anyone had any questions. As Cohen noted, two people did: one wanted to know more about the Nazis’ repeated rape of female prisoners, and the second one asked about how the SS treated homosexual prisoners. Cohen said he was startled and angry at what happened next.

“The tour guide said, ‘Okay, everyone, that’s enough, that’s the end of the tour,'” he said. “Why was she not answering our questions? We asked two questions … I’m feeling angry in that moment and looking at my colleagues and asking why is she not answering us? We knew that she knew the answers.”

But then, unexpectedly, they did get the answer. After turning in their headsets, Cohen noted, “She came over to us in a whispered voice and said, ‘Can you come over here.’ ” They did, and the tour guide quietly explained what had just happened.

“She said ‘Now that we’re not using the sound systems, sometimes our supervisors listen in and there’s some things we’re not allowed to talk about,'” Cohen recalled, and he added that in retrospect, that made more sense.

“Auschwitz is run by the Polish government today, it’s a state museum,” he said. Today, Poland’s leading political party is PiS, or the Law And Justice political party, which is a conservative and populist party that opposes civil rights for gays and lesbians and gay marriage, and has made it illegal to suggest that Poland rather than Nazi Germany was responsible for the Holocaust.

“They don’t want to be seen as culpable for the Holocaust,” Cohen said. “But why doesn’t the Polish government want tour guides to talk about sexual violence and about homosexuals?”

Doing so, Cohen said, could make people more sympathetic to the plight of women victimized by sexual violence, or for the gay community. He also noted that the group that tours Auschwitz most often isn’t Jews, but classrooms visiting the museum to learn about the Holocaust.

“Huge proportions are Polish school groups,” he said, adding that the Polish government doesn’t appear to want these children to learn about Nazi rape of inmates, or about how homosexuals were treated.

What Are The Three Forms of Silencing?

Today, Cohen said, there are three forms of silencing about the Holocaust. One is exactly what the Polish government is doing, what he called “institutional silence.”

The second is personal silence, a good example being the tour guide who choose not to answer certain questions to avoid losing her job, or what he called “hidden silencing” by Holocaust survivors themselves who have chosen not to talk about the ordeal they went through.

The last, he noted, is cultural silence, where subjects like sexual violence or the mistreatment of gay people become uncomfortable subject matter that some people simply want to avoid.

The Holocaust Memorial Resource & Education Center can be reached at 407-628-0555 and is at 851 N. Maitland Ave. in  Maitland. To see Dr. Cohen’s full presentation, view it here.