Every Brilliant Thing: A Painful Subject in a Comical Play

ORLANDO — The woman in Every Brilliant Thing has a hobby she’s been devoted to since she was just six years old. She makes lists of everything in the world that she thinks is brilliant. It can be a food, a color, or a movie. Simple things. Now she’s middle aged, her life has been through some rough patches, but she’s still adding to that list, and to get a clue of how far our narrator has gotten, she’s now past No. 8,000. That’s one heck of a lot of brilliant things.

Every Brilliant Thing, the play that features actress Suzanne O’Donnell in a strong performance as the narrator, feels less like a narrative about one person’s life than a stand up routine. The narrator is exceptionally high energy, and the fourth wall comes down quickly as she interacts constantly with the audience. The narrator will yell out a number on her list, and audience members will read the card they were given.

“Staying up past your bedtime.”

The narrator also recalls people from her past — her dad, the veterinarian who treated her dog, school instructors, her big crush in college — and calls on members of the audience to briefly play those roles. Sounds like just a fun show, right?

Well, it is — at first. Every Brilliant Thing starts to take on a different dimension, though, when we learn the narrator started the list at age 6 when she was at the hospital. Her mom was there, because she attempted suicide. Her dad tells her that mom has “done something stupid.” Not knowing how to cope, the child starts her list.From there, the show tries a very tricky and not always successful balancing act between the narrator’s desire to have a grand old time with the audience .. while recalling an exceptional painful story.

The Orlando Shakes Is Back with Live Shows 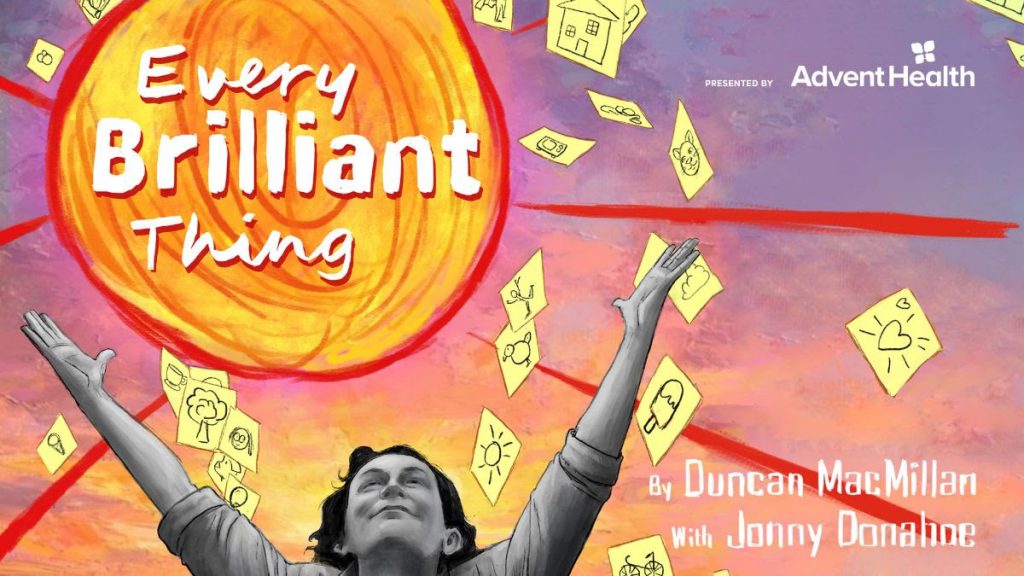 Every Brilliant Thing is now being performed at the Orlando Shakes, and the great news is that Shakes is back with live shows after more than a year of pandemic restrictions and social distancing. While masks are required by all patrons, nobody seemed to mind on Friday night as the audience frequently roared with laughter at this show. I wasn’t always one of them.

In the past, Orlando Shakes has opened its fall seasons with large scale productions with a massive cast, including the musicals Les Miserables and Monty Python And The Holy Grail,  which had audiences packed in their large Margeson Theater. Obviously, as the region struggles to get past the Delta variant, that kind of huge production may be another season or two away, which is fine. I could even understand the appeal of doing a show with a single character.

What I couldn’t quite fathom was opening the fall season with a play about a woman struggling to cope with the impact of her mother’s suicide, and how that continued to mess up her existence decades later. No, it’s not that the subject matter was depressing. It’s that the play seemed to go out of it’s way not to be depressing. No matter how many times the narrator stumbles, she sure does want to keep us laughing, and enjoying her manic performance.

Yes, the play deals with tough subjects such as depression and the resilience to keep going. All very good.

But after a certain point, I didn’t want the humor, or the constant calling out of another number on her list. I wanted to a quieter, more sober look at what she went through. Instead, the play felt like the guy at a funeral who can’t stand seeing all these folks crying and mourning, so he starts telling jokes. Hey, did you hear the one about …

It’s an odd play, because it truly strives to make you laugh, to like and appreciate our narrator, to want to see her cope, and to feel inspirational. For about 45 works, it worked. But for me, at least, I wish the play had dropped the humor and the audience participation at that point and offered something far more introspective.

How Can I See The Show?

The good news: the play is just 75 minutes long, with no intermission, and O’Donnell is spectacular. The improvisation audience participation is great fun. But I wish I could have heard a lot more about mom’s story than about what was on the narrator’s list by No. 1,000 and higher.

Every Brilliant Thing, the play by Duncan MacMillan and Jonny Donahoe, runs now through Oct. 16 at the theater at 812 E Rollins S. in Loch Haven Park. Call 407-447-1700 for reservations.

The Book Of Merman Unites Ethel, Mormons, and Great Fun
Nine The Musical and What Inspires Us