Escapism at its best at The Marvelous Wonderettes Dream On

Home /Reviews, Theater/Escapism at its best at The Marvelous Wonderettes Dream On 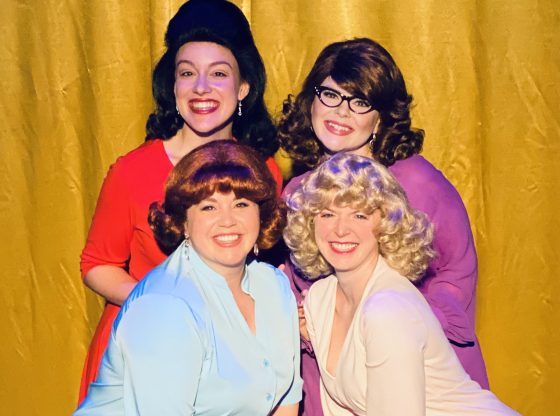 WINTER PARK — There are times in life when the opportunity to set aside the challenges that the world is tossing at you is too strong to resist. Instead you simply want to relax for an evening of laughter and pure entertainment. Spending an afternoon or evening watching The Winter Park Playhouse’s new production of The Marvelous Wonderettes Dream On may be just what you need.

This musical about four girl singers who perform popular hits at two of their high school events, one in 1969 and the other in 1978, is like traveling back to your own high school reunion and having a fabulous time. You recognize those catchy pop hits from the 1960s/70s, you laugh at the snappy one-liners by our Wonderettes, and if you’re like me, you marvel at the spectacular singing voices of the four cast members. Any way you cut it if you could use a night of unpretentious fun, this is the show for you.

The show, which opened on Friday and continues through April 16, is a sequel to the Off-Broadway hit The Marvelous Wonderettes, which has also been performed at the Playhouse. In Dream On, Missy, Suzy, Cindy Lou and Betty Jean perform some classic pop hits for their class as they get ready to say farewell to their high school days and move on with their lives as adult. In addition to their spot-on renditions of hits such as “Gimme Some Lovin,” and “Downtown,” they have much drama going on in their lives: Cindy Lou has been promoted to vice principal, Missy’s hubby has lost his job and her mother-in-law has moved in, and Cindy Lou has ambitions to become a popular singer.

In the second act, we jump to 1978 as they perform at their reunion, and there’s still much drama going on: by now Cindy Lou thinks her husband is cheating on her, Missy and Suzy both have their own kinds of man problems and Betty Jean’s music career hasn’t exactly taken off. But they’re all there for one another, through thick and thin.

The real pleasure is in the performances by an unbeatable cast. Hannah Laird has fun with her dim-bulb but very sweet Missy, Lindsay Nantz is nicely sassy as wisecracking Suzy, Anastasia Remoundes with her large nerdy glasses is the tries-to-be-wise Cindy Lou and Kate Zaloumes’ Betty Jean aims to show the world she’s ready to be a big music star. They all do an exceptional job at their comedic timing and hilarious postures, and the show is a riot when it moves into audience participation, calling on unsuspecting members of the crowd to play a retiring teacher who hasn’t completed any final grades in five years, Cindy Lou’s possibly cheating hubby and more. Never for a second stepping out of character — even when their chosen audience members drift off script — the cast turns these moments into laugh out loud treasures.

But it’s those soaring musical numbers, brought vibrantly to life by the stunning vocal talents of the cast, that really make this show a pleasure. I particularly enjoyed their chorus of the Supremes’ hit “Someday We’ll Be Together” and the Thelma Houston disco number “Don’t Leave Me This Day.” If you never liked disco in the 1970s, chances are you’ll revise your opinion after this show.

Director Roy Alan also brings some impressive dance moves to the numbers, and the show is just good old-fashioned fun. It was a pleasure to watch it with a highly enthusiastic crowd.

The show runs weekday and weekend evenings at 7:30 with 2 p.m. matinees. Ticket prices are $46 for evenings, $43 for seniors during evening shows, $39 for matinees, and $20 for students and theatrical industry professionals. Student rush “$10@10” offers $10 tickets (for students 25 years and younger) 10 minutes prior to a performance when seats are available.

To buy tickets call the box office at 407-645-0145 or visit online at  www.winterparkplayhouse.org