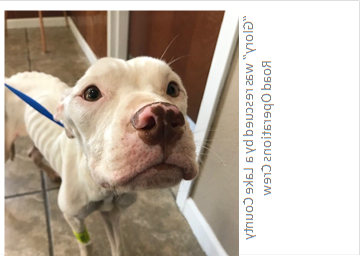 LEESBURG – At a time when Lake County is getting closer to opening its new high tech Animal Shelter, there’s a heartwarming story from Leesburg about an emaciated dog that owes its life to a public works crew that took the time to save her.

Tiffany Henderson, lead public information officer for the Lake County Office of Communications, reported that a Public Works Road Maintenance Operations crew is being acknowledged for “their heroic efforts to save an emaciated, abandoned dog that they spotted along a busy road.”

Henderson singled out Matthew Dexter and Aaron Cates, the two Public Works employees who found the dog on Tuesday, May 7 while they were mowing grass along Sunnyside Drive in Leesburg.

What Did The Men Do When They Found The Dog?

The two men “instantly noticed that the dog was abnormally thin, weak and in need of immediate medical attention,” Henderson noted. “The crew sprang into action, holding the dog to prevent it from being hit by a car and contacted Lake County Animal Enforcement. The dog was transported to the Lake County Animal Shelter where she weighed in at a mere 22 pounds.”

The Lake County Animal Shelter has an ongoing partnership with a local rescue agency, Pit Sisters Inc. of Jacksonville, which arranged for the dog to receive emergency overnight care. Veterinarians gave her fluids and provided life-saving supportive care, and continue to monitor her ongoing recuperation.

Officials with the Lake County government said they were proud of the mens’ actions.

“I know we have a great group of employees, but this week I found out we have a couple of heroes,” said Lori Koontz, Lake County’s Road Operations Division Manager.

Henderson said the dog has since been named Glory, and today “is eating, drinking and slowly gaining her strength back thanks to the combined efforts of our Lake County Road Operations crew, the Lake County Animal Shelter, and their partners.”

The Lake County Animal Shelter is building this new shelter to have the space needed to temporarily house hundreds of dogs, cats and other pets as they wait for adoption, and the building will double the size of the current building to 31,000 square feet.

The current shelter was built in 1994, but that 13,000 square foot facility is considered too small and has frequently struggled with overcrowding issues, while also suffering from faulty air conditioning problems.

In response, last year the Lake County Commission voted to approve the construction of a new animal shelter, financed by a one-cent sales tax that voters reauthorized in 2015. The commission also made the need for a new shelter more urgent by adopting a no-kill policy for Lake County, meaning animals are only to be euthanized if they’re too sick or too aggressive to be adopted.

Instead, the county has pushed for a strong adoption program to find homes for stray cats and dogs, and the shelter has responded with special adoption programs throughout the year.

Officials at the animal shelter say the no-kill policy has been working, and the county has placed more than 3,700 pets in recent years. But the shelter remains full and employees continue hosting special adoption events throughout the year.