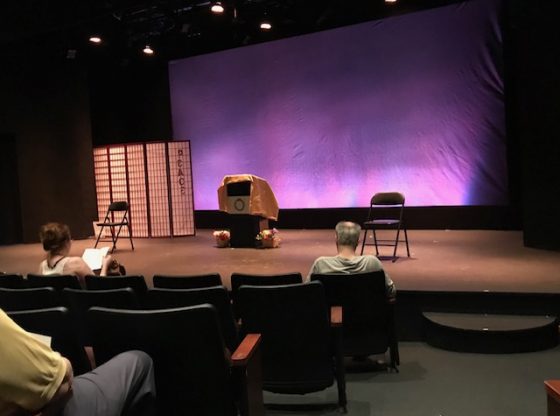 ORLANDO — The mood is rather somber at Church Of Saint Bearer, where the pastor, Mentor Higgins, is doing his best to uphold the spirits of his parishoners. Granted, he’s occasionally annoyed when a parishioner’s cell phone keeps ringing during his sermon, but the real challenge is confronting the prohlem they’re all having with the plague.

A strange illness that doctors can’t identify has left about 15 percent of the community very sick, or killed them, and it may be that simply sneezing on the person next to you or even just touching them spreads the deadly virus. Folks are on edge, understandably.

And you might not be surprised to learn that it gets worse.

The Orlando International Fringe Theatre Festival is known for entertaining audiences with zany and campy comedies, dance performances, musicals and even magic shows, but the production Church Of Saint Bearer may be one of the first I’ve ever seen to attempt full-out horror. It’s also one of the only shows I’ve seen to be done partly in the dark, and I must admit, it’s an eerily effective work of Le Theatre du Grand-Guignol, and a reminder that it isn’t just the movies or TV that have the ability to scare us.

What Is Church Of Saint Bearer All About?

As written by Irene L. Pynn and directed by Robert Cunha, Church Of Saint Bearer is something of a cross between two classic horror movies by legendary director George Romero, The Night Of The Living Dead and The Crazies. Like The Crazies, the play is about a mysterious, easily spread virus that causes people to go crazy, then die. And Night Of The Living Dead had a group of people trapped in an old farmhouse while zombies were roaming outside; here, we have parishioners in a church as matters go from crappy to significantly worse.

But it isn’t the plot that’s key so much as the intense mood set by Cunha, and what the actors bring to it. Brett P. Carson is quite good as Higgins, who tries to stay level-headed in the midst of so much chaos; this is no fire-and-brimstone preacher but a man who wants to quietly lead in an impossible situation. And Malakai Green is equally good as Victor, the young man who still attends confession but is questioning all aspects of his faith as the virus destroys his grandmother.

And it’s the very rational way they approach this situation — at first — that sets us up for the “Holy crap, did I just see what I thought I saw” moments on the way, including a delicious performance by Mark Davids as a parishioner who has a fairly gruesome death, or those moments when the lights go out and it’s a bit hard to see what’s around you in that theater …

And kudos as well to Moesha Searight as Renee, a parishioner who is particularly obsessive about not catching the virus, until she inevitably does, and then goes from pure batpoop crazy to … well honey, who said intestine-chewing was only for the movies?

Tense, unpredictable, and joyously creepy, Church Of Saint Bearer is an innovative piece of horror theater.

Church Of Saint Bearer is being performed at the Yellow Venue at Orlando Fringe, and the show runs for 55 minutes. Upcoming performances are on:

Tickets are $11, and you need a Fringe button to get into the shows. Tickets can be purchased at Orlando Fringe.