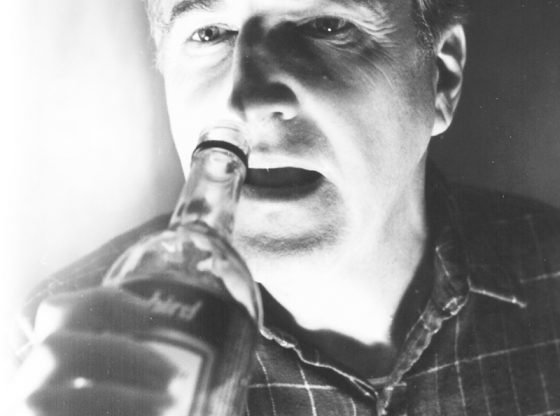 ORLANDO — Beat author Jack Kerouac had a unique and interesting connection to Central Florida. He did some of his writing while living in a bungalow in the College Park neighborhood of the city.

It’s quite fitting, then, that playwright and actor David A. McElroy is bringing back the play that he premiered in May, “Jack Kerouac: End Of The Road,” for a performance tonight, Saturday and Sunday at the Blue Bamboo Center For the Arts.

Originally one of more than 90 plays performed last May as part of the Orlando Fringe Festival, McElroy has done us all a great favor by bringing it back this weekend.

“Jack Kerouac – End of the Road” was written by McElroy and Steve A. Rowell, and McElroy portrays the legendary author, who was dead at the age at 47 after a long battle with heavy drinking. The one-man show finds Kerouac in the green room of William F. Buckley’s “Firing Line” program in 1968, his final appearance on television, as he drinks and argues with ghosts from the past.

Freeline Media reviewed “Jack Kerouac: End Of The Road” when it was performed at the Orlando International Fringe Theater Festival In May, and is re-publishing that review as McElroy brings the show bring to the Greater Orlando area.

It’s hard not to feel a sense of pity for the legendary figure known as Jack Kerouac. The author of the classic novel “On The Road,” which he bragged about writing in just 17 days, helped usher in the Beat Generation in the fairly conservative and conformist 1950s, a faction considered a forerunner to the Hippie movement that blossomed in the 1960s.

The only problem: Kerouac himself was highly contemptuous of the hippies, and made no bones about it. He considered them dirty and stupid and didn’t want to be associated with them. A political conservative (Kerouac was a lifelong Republican and bragged about his family having voted for Herbert Hoover during the Depression), he hated the radical spirit that the hippies espoused.

And by the late 1960s, Kerouac was drinking heavily and popping pills, a combination that would prove lethal in October 1969 when he died at home in St. Petersburg, Florida of an abdominal hemorrhage. He truly had reached the end of the road.

Kerouac spent a lot of time in Florida, and the home he lived at in College Park is now The Kerouac Project, a home that supports aspiring writers and which has become a significant part of the lore of College Park, since Kerouac lived there in 1957–58 when “On The Road” was published.

Equally fitting as a tribute to the author is the play “Jack Kerouac: End Of The Road.” Written by Steve A. Rowell and David A. McElroy, and featuring a stunning and very memorable performance by McElroy as Kerouac, the play has a clever premise that works beautifully in painting a stark portrait of a man who inspired a new generation, then found himself bitterly alienated from the very path he’d created.

What Happens During This Play?

It opens in 1968, a highly tumultuous year in American history, as Kerouac is waiting to appear on the TV show Firing Line, to be interviewed by host William F. Buckley Jr., a friend of his since college days. Kerouac wants to talk about his poetry, but as Buckley’s assistant (played by Dylan Hannan, who also plays Saxophone during the show) points out,  Buckley wants to discuss the counterculture of the 1960s and Kerouac’s political views. This would be Kerouac’s final appearance on television.

As he waits for the show to begin, Kerouac has his pills and a bottle of booze on hand. And he starts to reminisce about the past — not always a happy one, for sure. In fact, it quickly becomes clear how much bitterness Kerouac was nursing by the late 1960s, as he muses about his family life, his parents, his failed relationships with women, and, of course, how much he hated the direction that the counterculture had taken.

There are some very funny moments in the show — in particular when he recalls hanging out with his friend and fellow poet Allen Ginsberg, who was gay and Jewish, in the 1950s. After watching a documentary on Hitler that promopted Ginsberg to point out that the Nazi leader tried to murder his people, Kerouac is quite humiliated when his mother explodes and says “You Jews are always complaining about something,” which sends Ginsberg rushing out the door. On the other hand, Kerouac loved his “Ma-ma,” who died in 1964.

He also recalls an appearance in the 1950s on the Steve Allen Show, when Kerouac seemed like a much happier man, eager to talk about the seven years on the road that inspired him to write his most famous novel, or to let the TV audience hear samples of passages he left out of the book. That only makes it that much more of a stark contrast to what Kerouac had become by 1968.

McElroy’s excellent performance alone makes this play worth seeing, although the play, so finely directed by Laurel Clark, is a fascinating one. It’s particularly appealing, I suspect, to Kerouac fans, but really anyone can relate to this portrait of a lost soul who could no longer find his way in a society that had changed too much.

The performances of “Jack Kerouac: End Of The Road” will be tonight, Saturday and Sunday at 8 p.m. at the Blue Bamboo Center for the Arts, 1905 Kentucky Ave. in Winter Park.

Tickets are $20 for general admission and a 20 percent discount for students and members of the Armed Services.