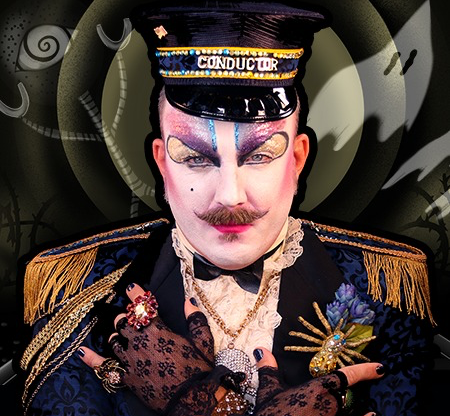 ORLANDO — If you’re generally inclined to think a Fringe show should be zany, outrageous, unpredictable, offbeat and campy, then Dandy Darkly’s All Aboard is for you.

This solo show is by Neil Arthur James, who has imported his production from New York City to the Orlando International Fringe Theatre Festival.  And as he likes to note in the program book, “The less you know, the better. Simply ‘Go. See. Dandy!’ ”

Fair enough, I suppose, so let me describe it this way, without giving away too much. Dandy, James’ alter ego, has some extra tall tales to tell about the night that a train called the Gaybird Steamer ran off its tracks — Gaybird, by the way, being a town in Georgia devoid of modern day politically correct attitudes, or much of a passion for gay rights causes.

What Is Dandy Darkly All About?

Dandy, decked out in glittering gold pants, Elton John-style heels, white clown makeup and a conductor’s hat and jacket, looks a bit like a demented clown that just jumped out of a Stephen King novel, and his high-pitched, high-volume voice seems to fit the part as well. Except that Dandy sure doesn’t come across as the terrifying clown type. He’s more like the one in the gay cabaret that keeps rushing up to the microphone and screaming, “Oh, and I forget to tell you something else!”

Dandy’s reminiscences, of which he has many, conjure up images of a sleepy southern town of yester-decade filled with ghosts, rednecks, and beauty parlors where the gossip is thicker than the humidity, and he manages to touch on more than a few political commentaries without looking like he’s talking politics — no small achievement.

But it’s really Dandy’s rapid fire, faster than a machine gun delivery that’s the biggest marvel, combined with his tendency to wail in a high pitched voice, snap at the audience, and make the notion of a “larger than life” performance seem tiny by comparison.

Definitely a show for adults, if your cup of tea is the outrageous, Dandy is your Lipton.

Dandy Darkly’s All Aboard is being performed at the Green Venue at Orlando Fringe, and the show runs for 60 minutes. Upcoming performances are on:

Klondike Kate Offers a True Gold Rush of a Cabaret
Infestation, a Spoof of 50s Horror Flicks, Is Silly Fun