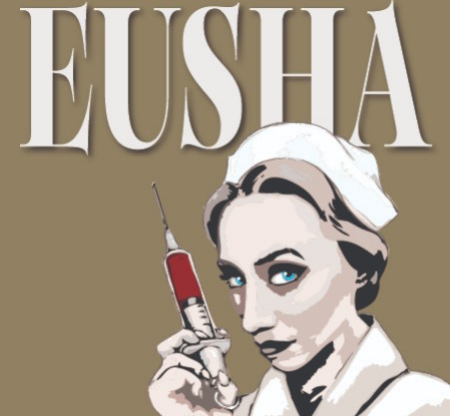 ORLANDO — If you’ve ever spent several days in the hospital, as I did in 2016, you know that nurses can be reassuring and helpful, but tend to be too busy to sit and chat. So if you do happen to get a nurse who stands by your side and talks, and talks, and talks endlessly, you may have reason to get nervous.

That’s the premise, in any case, of the play Eusha, now at the Orlando International Fringe Theatre Festival. This solo show, written and performed by playwright/actress Elisa Benzer of Canada’s Shortgirl Productions, is an eerie psychological thriller that creeps under your skin like a slow moving virus. If you’ve ever had a phobia about hospitals, this one will push those fears over the top.

What is Eusha All About?

The poster for Eusha, showing an illustration of a grinning nurse holding a hypodermic needle, left me assuming it would be a zany comedy, which is the standard fare at Fringe. As the play opens, we’re in an intensive care unit, and the audience literally becomes the patient, a man who’s been in a horrific car accident, has been clinging to life, and is so badly injured that his jaw is wired shut and he can’t speak. We see through the patient’s eyes: when he’s asleep, the stage is in darkness. When he opens his eyes, the lights go up.

His nurse Eusha, played by Benzer, is quite talkative at first, but in a rather formal, businesslike way. She emphasizes just how lucky the patient is to be alive after what he’s been through. At this point, I realized the show was not a comedy, and assumed it was a dramatic piece about recovering from injury, perhaps a heartfelt tribute to the nursing profession. Wrong again.

The nurse is often by the patient’s side, reading to him, and then she starts getting far more intimate, discussing bizarre moments from her own life — often in an icky, uncomfortable way that’s going to leave you thinking, TMI, TMI. She does have other patients, including a woman whose body is being devoured by a flesh-eating bacteria, and some of the show’s creepiest moments come as the nurse goes backstage and we hear her other patients screaming in agony.

Eusha gets darker and darker, as it becomes clear that this is a woman has way over the top psychological issues. You can see the ending coming, but that doesn’t dilute its impact at all: it shifts into squirm in your seat mode in a gruesomely effective way.

Benzer does a fine job playing Eusha, and I was fascinated to note that one day after seeing the production Church Of Saint Bearer, I had discovered two Fringe shows devoted to tales of horror, the kind that Edgar Allan Poe would have enjoyed. Long live the theater of horror.

Eusha will have its final performance in the Purple Venue today at 9:30 p.m.