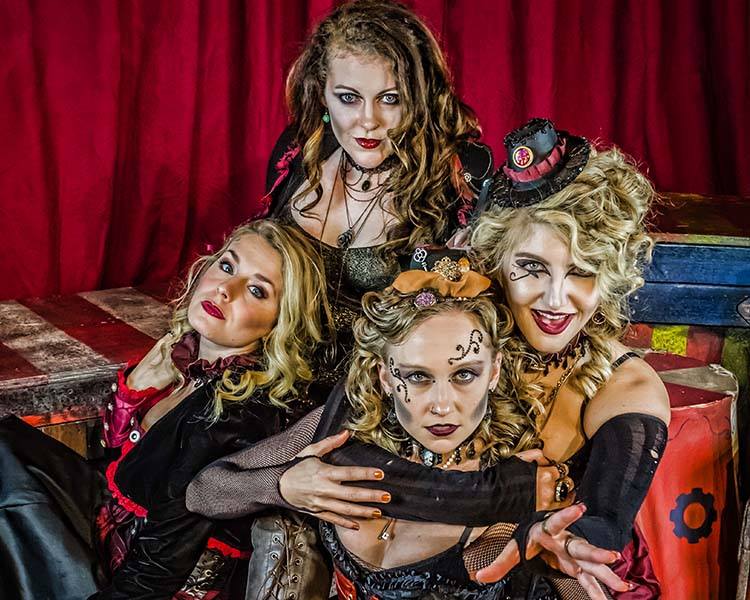 ORLANDO — It’s all conveniently summed up in one word ….

If you’ve lived in Central Florida over the past decade, that word needs no introduction. For the past eight years, the troupe known as Phantasmagoria has been performing around Halloween, at the Orlando International Fringe Theatre Festival, and more recently, around Christmas.

The long-running series, created by local playwright, director, actor and theater professor John DiDonna, has been thrilling audiences with their recreations of classic tales of horror for nearly a decade.

And now, with Halloween coming up fast, they’re ready to launch into season nine.

The Phantasmagoria troupe — a diverse bunch that includes actors, dancers, musicians, acrobats and puppeteers, are also planning to stick around for Christmas to revive their successful merger of Phantasmagoria with Charles Dickens’ classic “A Christmas Carol” — which, as DiDonna is quick to note, is really more of a ghost story than a holiday one.

So with so much busy activity on the Phantasmagoria calendar, Freeline Media decided it was time to catch with DiDonna to find out more about what Phantasmagoria is up to this fall.

Looking Back at Nine Years of Phantasmagoria

Freeline Media: We can remember the very first Phantasmagoria production at the Orlando Shakes a decade ago. What do you think has been the key to the durability behind the brand and concept, and how you’ve managed to remake it as a touring production and even a Christmas show.

John DiDonna: Wow. Great questions. I don’t know, and I do know. I think that the style and approach of the show – a very sincere storytelling performance – speaks to people on many levels. That, plus the mythology of the actual troupe, the interaction of the characters and the multiple types of performances from dance to acting to combat to puppetry to fire really plays to a wonderfully diverse audience. Plus the time period the “troupe” represents, that lovely Victorian era that appears in so much of our fiction and history.

I also think that we constantly reinvent ourselves within the scope of the world we have created. Just this week I was tweaking a script from years ago to use for our permanent Atlanta troupe and I discovered all new things! I cannot wait to get up there to direct it in an entirely new way!

FM: As part of the Phantasmagoria shows, you’ve tapped into the novels and short stories of classic horror writers — Edgar Allan Poe, Charles Dickens, Mary Shelley, who had a starkly different approach to horror than, say, today’s horror films, which are heavy in special effects and computer-generated gore and shocks. Do you feel like Phantasmagoria is reintroducing today’s audiences to the way horror authors used very different means for scaring people?

JD: Well, it is indeed one of our intents. To keep the centuries old tradition of the storyteller alive and well … and to move it into the future. Just as to the troupe’s characters, the stories must be real to us the performers, and to the audience. We like to pull them into that world of horror and dread with us … give them some genuine scares, some wonderful laughs, but also give them great stories with great characters.

FM: In the 1940s and 1950s, there was a national radio program called “Suspense,” which used actors and often brilliantly written scripts to scare radio audiences — and the programs relied heavily on the radio audience using their imaginations. (Editor’s Note: Great examples include ‘Sorry Wrong Number,” which later became a Barbara Stanwyck movie, and “The Hitcher,” later a Twilight Zone episode.) They had to scare people without visuals. Although Phantasmagoria has a strong visual component, do you think you’ve rediscovered some aspects of the terror of the mind?

JD: I think our Visual component is a huge part of what we do, but yes. The words. The breath. The silence and the ………… extended pause for effect. All of these play into what we do. I think there is a long ago family tree within our mythology that probably DID those radio shows, with the audiences never realizing they were listening to centuries old immortal storytellers. LOL.

FM: Tell us about your successful merging of Phantasmagoria with Dickens’ A Christmas Carol.

JD: Dickens’ A Christmas Carol is truly a ghost story of Christmas, is it not? I think it is probably one of the greatest and most well known ghost stories of all, but oftentimes people only think of it as a Christmas tale.

So when we approached it, we wanted to remember the journey of the Ghosts as well as Scrooge’s journey. I remember hoping beyond hope we could capture that Phantasmagoria style and blend it seamlessly with Dickens and was so pleased that we did!

Sold out most of our performances last year in all the counties we played, and have actually added counties this year as we tour both the Halloween and Christmas shows.

FM: You’ve got a large entourage of talented performers. What’s the key to maintaining their loyalty to this ongoing theatrical franchise?

JD: Phew! Well, people come and go as times change, but we still have an amazing core that has been there from the start. And the “new” performers in Atlanta – at least half of them I have been working with for years. So it is just this great group.

We work. We train. We explore. We fight in the best of ways and it moves the ideas forward. Each person brings their own mark to the troupe and they and we can shine.

We have over 40 members in Orlando now doing all sorts of shows, and we have our base foundation in Atlanta of a 10 person troupe that is the ground floor for us up there. And some people move to other projects, then return to us, some move away and get involved in great projects elsewhere. It is a great flow. And some of us have been working together for decades – such as the Bill Warriners, or the Kevin Beckers, or the Daniel Cooksleys.

And we are constantly busy. That helps. It exhausts us, it burns us out sometimes, but it also gives us motivation to keep moving forward!

One of our members recently moved away for grad school and is coming back to work on our events for October. Another member had gone to New York to study, just returned, and is rejoining the troupe.

Just like a Pha-amily, we merge in and out.

What’s Coming Up For Halloween?

Next up for the troupe is “PHANTASMAGORIA IX: Homecoming, which celebrates the 2018 Halloween Season and its ninth year in Central Florida. The show will be performed at the Lowndes Shakespeare Center in Loch Haven Park on Oct. 12-15, then move on to:

What’s Happening Around The Holidays?

A “Phantasmagoria Victorian Christmas Celebration” will be held at the Higgins House, a chance to celebrate the holidays early on Dec. 1 as Phantasmagoria arrives to revel in holiday splendor with music, Holiday Ghost Stories, magic and more while enjoying a Victorian Buffet of desserts and delights along with Victorian drinks to warm a chilled heart.

This event is on Dec. 1-2, with two showings during the evening.

Then celebrate the 2018 Holiday Season as Phantasmagoria returns with its unique adaptation of Charles Dickens’ classic holiday tale “A Christmas Carol, A Ghost Story of Christmas,” in a production featuring dance, puppetry, projections, music and storytelling. This show will be performed at:

In addition, Phantasmagoria will be performing throughout the season at a variety of locations. They now include: