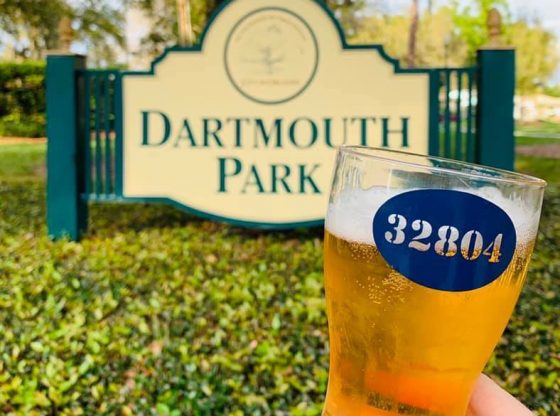 COLLEGE PARK – Did you know there are only a few dozen Beer Pilsners left?

On Saturday, the College Park Neighborhood Association will be hosting their premiere spring event, Saturday In The Park, a family fun day that begins at 11 a.m., and, for the first time in nearly three decades, goes until 10 p.m.

The neighborhood celebration is at Dartmouth Park.

After the quick cold spell that sent temperatures plummeting into the low 40s at night this week, the weather is expected to warm up nicely by Saturday, with a high of 81, offering Central Florida neither the brief bouts of winter cold that mostly come through in January, or anything like the oppressive summer heat and humidity. So there’s not much excuse not to get out there and enjoy the day in one of Orlando’s most historic neighborhood.

What Happens at Saturday In The Park?

The College Park Neighborhood Association works to promote and highlight all the good things about College Park, so Saturday In The Park will be all about what the neighborhood has when it comes to talent.

That will include plenty of local entertainers, coming from a variety of venues, such as:

* Local schools
* Local churches
* VFW musicians
* Even performances by the Orlando Ballet, who have their offices in College Park near AdventHealth.

Kids can expect to be entertained by the “Classic Carnival” that will be set up on the west end of the park, offering a nostalgic look at what carnivals were like in yesteryear, while there will also be a display of artwork created at neighborhood schools — artwork that will also be for sale, with the schools getting 100% of the proceeds from whatever gets purchased.

Local schools are actively involved in this event in other ways. Princeton Elementary School and St. Charles Borromeo Catholic School are co-hosting a complimentary movie in the park, while the Parent-Teacher Association at Princeton Elementary is also bringing Goodies for sale.

There will also be professional artists who live in College Park attending this event, bringing along their own works for patrons to check out.

And there will be plenty of carnival-like activities, including:

And once the sun starts setting, a different kind of fun begins. That’s when local breweries start arriving, and Saturday In The Park will transform into a Beer Garden.

Oh, and one other thing: this year, CPNA launches its first ever Silent Disco after sunset, making music from every conceivable genre available through headphones that will be provided to 150 people at a time. Just put on the headphones, then select the kind of music you want to listen to.

There will also be food trucks on site, and CPNA is selling special 32804 Logo Beer Pilsners, available for $15 — which gets you both a glass and two beers. By the way, 32804 is the College Park neighborhood zip code.

Who Is Organizing This Event?

The College Park Neighborhood Association is a nonprofit that’s been working to preserve, protect and improve the College Park neighborhood since 1987. Saturday In The Park is their major annual fundraising event, along with the annual Tour of Homes in the fall.

This event, now in its 28th year, has traditionally been called Sunday In The Park, but this year CPNA decided to shift it to Saturday so patrons could enjoy several firsts, including the longer evening hours, the Beer Garden, and the Silent Disco. Dartmouth Park is located on Edgewater Drive and Dartmouth Street.

The free movie will be “Wreck it Ralph 2 – Ralph Breaks the Internet.”

From Hotel to Museum: The Unique History of the Wells’Built
Holocaust Museum Exhibit Covers Artistic Expression Through Conflict