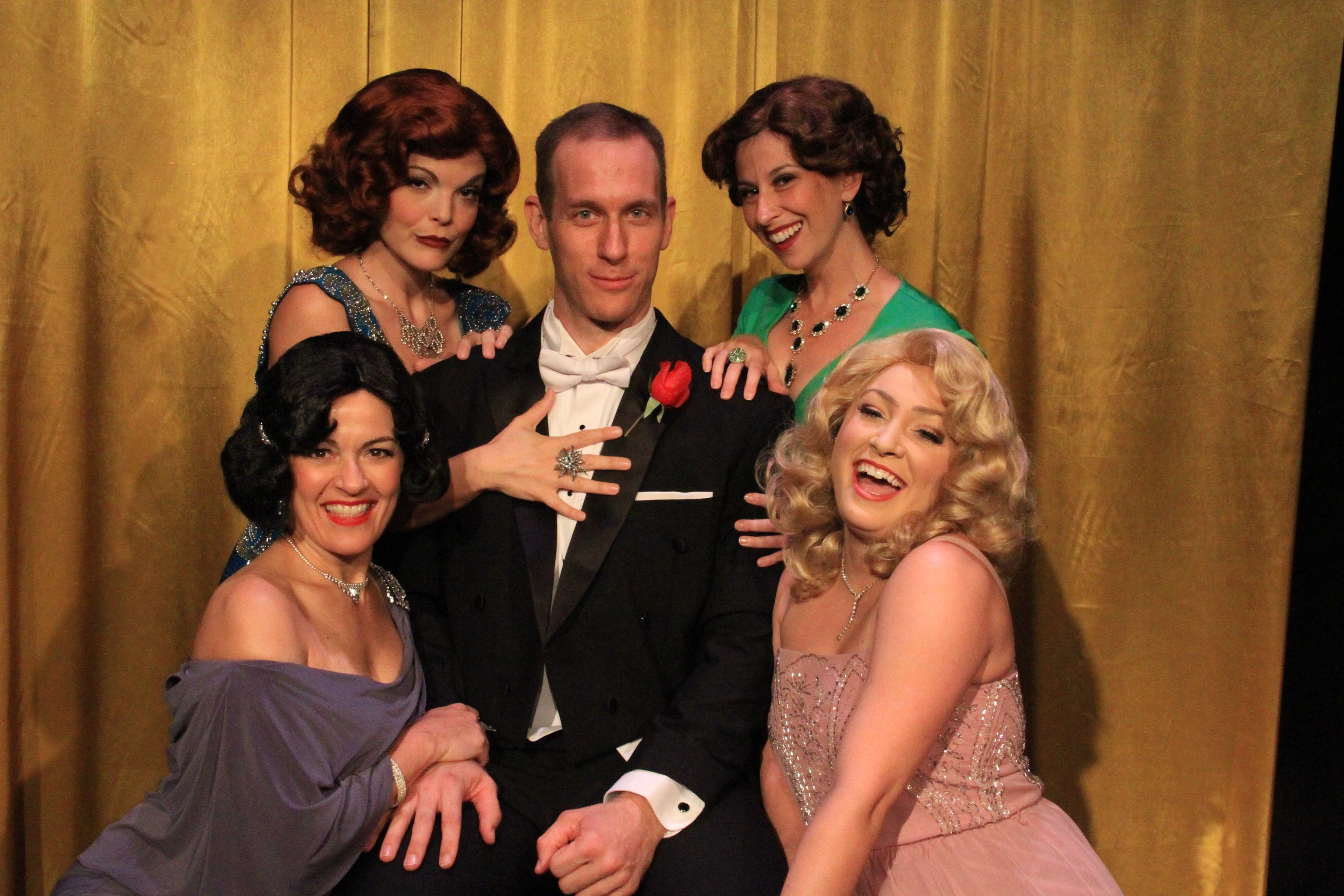 WINTER PARK — Ah, the life of a handsome, charming, stylishly dressed gigolo, a constant presence at the most chic nightclubs, a drink in his hand, and ladies swarming around him like mice in a cheese factory.

Any man who considers himself of average (or below) looks has got to wonder at times just how exciting, exotic and glamorous it might be to have the kind of looks that set you apart in the crowd and inspire women to start lining up to meet you. Manly utopia?

Perhaps, but maybe not. As the musical “Gigolo:The New Cole Porter Revue” makes clear, dashing playboys often find their downfall can be a rude and painful one as they land with a bruising thud on the floor. Yes, they love the cat-and-mouse game of romancing the most attractive women at the clubs, but what happens when the ladies think the love is for real?

Then the dude’s got a problem.
“Gigolo,” the musical revue created by California playwright Paul Gilger, is a lot of things, including a very fitting tribute to a songwriter whose work has aged remarkably well.

The show honors the lasting legacy of Cole Porter, but Gilger goes a step further by linking more than 20 of Porter’s catchiest songs into an actual story. No dialogue, but the songs manage to successfully create a humorous saga of a handsome gigolo who wins the hearts of four women — only to discover there’s a price to pay when each woman realizes she’s not his only conquest.

“Gigolo” opened on Friday at The Winter Park Playhouse and runs now through Aug. 19. This is a play with charm and style to spare.

What Makes Gigolo So Entertaining?

This show has three great ingredients. One is the concept behind Gilger’s play.

Cole Porter didn’t write songs like “I’m A Gigolo,” “Let’s Misbehave,” and “It’s De-Lovely” with the intent to tell one specific story, but Gilger does an exceptional job of arranging the songs in such a way that the characters do indeed seem to be expressing their deepest feelings — falling for that handsome young playboy, learning the painful lesson that they’re one of several on his menu, and then banding together in solidarity to give our young stud the comeuppance he so richly deserves.

There really is no need for dialogue because while Porter’s music is so evocative, he was also a master lyricist who had an ear for putting our simplest and most common emotions into lyrical form.

(Gilger noted that he was inspired by the real life story of Porfirio Rubirosa, who made his mark as an international playboy and was married five times.)

The second ingredient is the excellent direction by Roy Alan, the Playhouse’s founder and artistic director, who keeps everything quite lively, incorporating dance, sentimentality, and humor — rich, rich laugh-out-loud humor.

Natalie Cordone, one of the finest musical actresses in Central Florida, is ideally cast as the woman who just got off the wagon, then shows up at the club asking “Make It Another Old-Fashioned, Please,” which is one of the show’s irresistable highlights. She has another stellar moment in the second act with “Find Me a Primitive Man,” where Natalie’s impressions of a cavemen will have you rolling in your seat laughing.

Porter’s songs like “I’ve Got You Under My Skin” and “In The Still Of The Night” sound as fresh today as they did in the Roaring 20s, but Alan and Gilger deserve an artistic medal for their staging of the song “You’ve Got That Thing,” an innocent little ditty that becomes a comedic showstopper in this one — a reminder that naughty humor and innuendo still has the power to evoke stunning belly laughs.

The Performers Truly Stand Out

The third killer ingredient is the cast. Cordone is superb as always, and Zach Nadolski is ideal as the gigolo, with an ever-present grin designed to melt the ladies’ hearts — plus some very funny Oops! expressions when his conquests turn on him.

Kelly Morris Rowan always looks like she’s one step away from strangling the mischievous gigolo, and Melissa Minyard and Alyssa Flowers round out a first-rate group of singers, dancers and comedians.

“Gigolo” was featured in the Playhouse’s inaugural Florida Festival of New Musicals last summer, and now comes back for its first fully produced run. It’s a happy reminder of why we all love musical theater.

When Is The Play being Performed?

The music is provided by the Playhouse Trio with Musical Director Christopher Leavy on piano, Sam Forrest on percussion and Ned Wilkinson on multiple instruments.

Ticket prices are $42 for evening shows, $39 for seniors during evening shows, $34 for matinees, and $15 for student and theatrical industry professionals. Student rush “$10@10” offers $10 tickets (for students 25 years and younger) 10 minutes prior to a performance when seats are available.

For more tickets and information call the Playhouse box office at 407-645-0145 or visit them online.

Fantasy Was Never So Sinister as It Is With “Of Cats And Wolves”
Jewish Cinema: Hate-filled propaganda