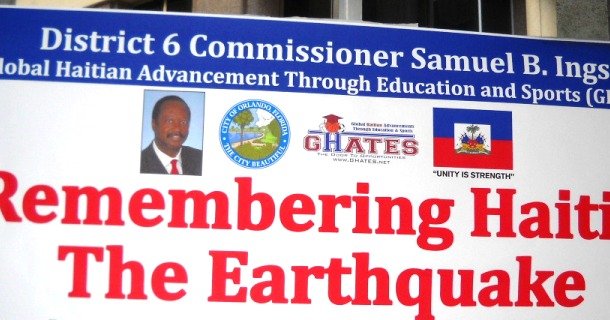 Government |
ORLANDO – For Marjory Sheba, the images were so strong and horrific, so quick to scar the psyche, that she recalled them through words of poetry.

“Three-hundred and sixty-five days and counting,” Sheba said.  “Our people are suffering.  They’ve suffered before, but now their hearts are tearing.”

Wednesday marked the one year anniversary of the devastating earthquake that caused so much damage, destruction and death in the nation of Haiti. It was a catastrophic magnitude 7.0 earthquake, with an epicentre near the town of Leogane, about 16 miles west of Haiti’s capital, Port-au-Price.  It happened on Tuesday, Jan. 12, 2010, and by Jan. 24, at least 52 aftershocks measuring 4.5 or greater had been recorded. It’s been estimated that three million people were impacted by the quake, with up to 234,000 killed.

“The Earth shook and swallowed us in,” said Sheba, a resident of Haiti who su

rvived the devastation, and was in Orlando on Wednesday to take part in a ceremony marking the one year anniversary date.

“Massacred our loved ones and families,” she said.  “Help did come from distant shores. Ninety days – billions raised.  But we died in massive numbers, still.”

Sheba was one of several speakers who took part in “Remembering Haiti … The Earthquake,” a commemoration ceremony sponsored by Orlando City Commissioner Samuel B. Ings, and held in the main rotunda of Orlando City Hall.  It was an event that featured Haiti food, music, dancing, and an continued effort to collect donations for the people of Haiti, with a list of recommended items that included toiletries, new and gently used clothing, school supplies, sporting goods, and more.

But it was also a time to solumnly mark the terrible loss of life in that nation, and the challenges that face ongoing relief efforts for the victims of the quake.

“This time last year at approximately 4:15 p.m., the first foundations were torn across borders in Haiti,” said Monica May, the host of the Tom Joyner Morning Show and news/community affairs director at STAR 94.5 COX Radio station in Orlando.  “A sound like none we have ever heard was heard at this time in Haiti.  We are here tonight to remember Haiti, to remember the lives that were lost, to remember the families that were lost.”

U.S. Rep. Corrine Brown, D-Jacksonville, whose district includes parts of Orlando, said she got a congressional briefing last week about the situation in Haiti, and it continues to frustrate members of Congress that “billions of dollars was allocated to the people of Haiti, and they’re still waiting.”

Brown blamed that on the disputed Nov. 28 Haitian presidential election.  The results have been held up due to allegations of fraud, and there have been calls for a new election to be held.

“It’s an example of when the government doesn’t work, the people suffer,” Brown said.  “There’s still over a million people in tents – in tents, still.  Not acceptable.”

Sheba described her people as being “sick from the corruption clutching our airs,” and said it was deplorable that a year later, they’re still waiting for so much of that help to arrive.

“The reason why we’re waiting still – just inexcuable,” she said.  “We cry out for justice.”

But there was also a sense of hope at the event, a feeling that people could be inspired to join in the relief effort, and come together as an extended family.

“We thank our family – those of you who are in the seats here with us,” May said, while Brown added, “Hopefully this is going to be a new beginning.”

Ings noted that the ceremony was “a cultural event that celebrates the Haitian culture while bringing awareness of the continued needs of the people of Haiti.”

And while he thanked those who made donations, and those who showed up to demonstrate their support for the people of Haiti, he also urged the guests at City Hall to enjoy the music, entertainment, and especially the food that was being provided there.

“The reception line is open,” Ings said, shortly before the speaking program started.  “So you’re welcome to all the food here.”

Gun rights group lashes out at Congress for proposing new gun control laws after the Tucson shooting.
RealtyTrac says U.S. set a foreclosure record in 2010 — but more bad news may be on the way.