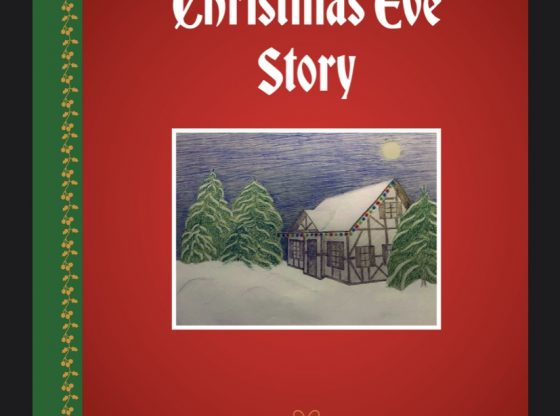 The newest book is A Christmas Eve Story, which was published in October 2022.

This book is available in a paperback edition on Amazon and as a Kindle eBook. The book follows the story of Tadeusz Lipman, who finds himself on Christmas Eve standing on the ledger of his 6th floor apartment, ready to jump as he listens to the angry pounding on his apartment door. When the door comes crashing open, Tadeusz leaps into the void. The novel picks up a year later, as another Christmas is approaching. It’s a story about ghosts, survivor’s guilt, redemption and the holidays. At times scary and at other times joyful, A Christmas Eve Story is about falling in love with the season all over again. So, grab some hot chocolate, relax on the couch next to your Christmas tree, and enjoy the spooky and uplifting world of A Christmas Eve Story. Buy via PayPal. 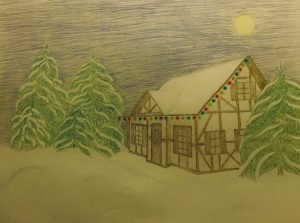 This holiday novel is Freeline Productions’ most sentimental and upbeat book yet. Freeman wrote the novel in the heat of July and August, when he curiously felt inspired to write a Christmas-themed book, and one with a ghostly theme of spooky hauntings around the holidays. “Surprisingly, it was a hot July day when I got the inspiration to write my first Christmas novel,” Freeman noted. “Based loosely on actual events that happened in my life, that became the basis for the story of Tadeusz Lipman and his harrowing, deeply despairing Christmas Eve. How his life changes a year later is the focus of the book, which I hope you enjoy.” 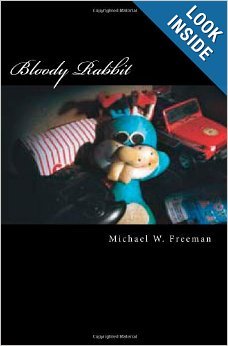 His novels Bloody Rabbit and Koby’s New Home were both written at times when the author found himself downsized from the volatile field of print journalism, searching for his next opportunity. The lead characters in both books, R.T. Robeson and William Grabinski, struggle to cope in these frustrating, emotionally demoralizing times when all that’s left is the new part-time “gig” economy. They’re living on the margins, like so many others. At the same time, these novels are not simply about economic dislocation. In a deeply chilling way, the novels take the reader into a nightmarish existence where social norms appear to be breaking down, and a collective anger among average workers has created a hostile environment where outbursts of violence can happen at any second. Everyone is on edge, and losing control seems dangerously easy. Both Robeson and Grabinski, two mild-mannered and discrete men, find themselves living in a half-dream state where old realities have faded away. Their sense of alienation grows. Humanity is omnipresent — and oppressive and corrupting. Suddenly it’s as if the entire world was made up of James Joyce’s Jesuits, ranting about the horrors of the grave. 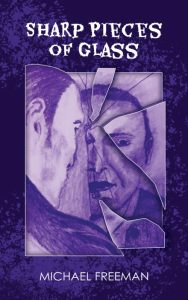 His book Sharp Pieces Of Glass explored a city on fire, and a failed attempt to escape from it all. What is this novel about? Simple. His city is burning. Every night it becomes an inferno outside Gregory Thome’s apartment window: protests that turn violent, destructive, scorching. Gregory desperately wants to escape the simmering heat and finds himself fleeing to an historic hotel by the ocean for a weekend of quiet and solitude. The tranquility proves so captivating in meeting his ordinary desires that Gregory extends his stay for an entire week, even though he can barely afford it. Only quite slowly does the reader develop a sense that Gregory might have an ulterior motive for staying there, that a darker secret lies beneath his subconscious. There are strange occurrences in his room, including those sharp pieces of glass mysteriously scattered in there which become a mocking riddle for Gregory. Sharp Pieces of Glass is a powerfully grim novel that builds to a fiery ending that questions the entire nature of Gregory’s troubled existence.

Freeman is a native of Fall River, Massachusetts who has lived happily in Orlando since 2002 with his husband Mel and their cats. His novels are available through Amazon, Kindle, and the Freeline Productions online bookstore.

“Koby’s New Home” opens on a cold December day, as William Grabinski discovers a kitten meowing hungrily from behind a trash can in his building’s courtyard. His heart goes out to the freezing little furry face.
So begins the saga of a man and his kitten, Koby ….

… oh, and one other: the ominous figure called Cigarette Man.

Having lost his job and now juggling several low-paying part-time jobs, Grabinski is forced to rent a small, dirt cheap unit in an old, decrepit building. Feeling lonely and isolated there, he can’t resist adopting that kitten, which Grabinski names Koby.

It starts out very much like a heartwarming and sentimental story of a depressed man who finds comfort and happiness by caring for this sweet, adorable kitten. But it isn’t long before the book heads off in a much darker direction.
Grabinski becomes paranoid about Koby, because his building has a strict no pets policy. What if he gets caught? Will Grabinski and Koby both end up on the street? He nervously bites his nails wondering if there will be a knock on the door, announcing his eviction.

And yet, that turns out to be the least of Grabinski’s problems.

Now in his 40s, R.T. Robeson thought his life was comfortable and well-established — until an economic downturn claimed virtually everything he had, including his job, house and car. He finds himself riding the city bus to a neighborhood he might never have considered living in before, resting all of his hopes on securing a tiny apartment that’s available. Not even the unit’s unsavory past discourages him from wanting to take it. But even when the landlady accepts his application, Robeson still finds it an uphill struggle to fight off persistent feelings of being a failure.

Then one evening, as Robeson is working as an usher at a local theater, he watches as a hardcore punk band called Bloody Rabbit performs a set of songs that are unsparingly nihilistic and defeatist. Robeson leaves the concert feeling depressed and weary. What he doesn’t expect is what happens as he goes back to that little apartment … the events inside those two rooms that start out odd, then become eerie, then downright terrifying. It puts Robeson on a far more horrific path than he’d ever expected.

“Bloody Rabbit” takes an unnerving look at one man’s struggle to keep his life on track – and the strange twists that his frequent bouts of depression have on the life he’s trying so desperately to rebuild.

“The New Boarder” is a terrifying look at one man’s desperate attempt to escape from …. what?
Late one night, 30-year-old Janus breaks into a panic, throws his belongings into a suitcase and flees his apartment. After driving for several hours, he abandons his car in a wooded area and rents a small furnished room in a boarding house. His escape has begun.
This story reverses the traditional formula of the mystery novel, which typically reveals a shocking crime and then starts the hunt for a suspect. In “The New Boarder,” the reader knows who the suspect is, but has no idea what Janus has done.
As Janus hunts down local newspapers to see if there are any news reports about a possible law enforcement search to find him, the events in that quaint small town he’s hiding out in take on a strange, unpredictable twist. Early on, Janus had noticed warnings posted around town advising people to be careful, because several local gay men disappeared and were later found dead and mutilated. The notices warn that a serial killer is stalking gay men. Quite by accident, Janus thinks he may have stumbled onto the identity of the killer — or does he?
“The New Boarder” takes a sometimes surreal look at a few terrifying days in the life of a tormented man. Janus believes he’s fighting inner demons, but doesn’t realize the full extent of the demonic situation he put himself in by renting that little room. He wanted to escape. Instead he got trapped.

Community theater is a part of Freeline’s mission
The Zero Hour with Paul Castaneda: Get ready for Music of the Night