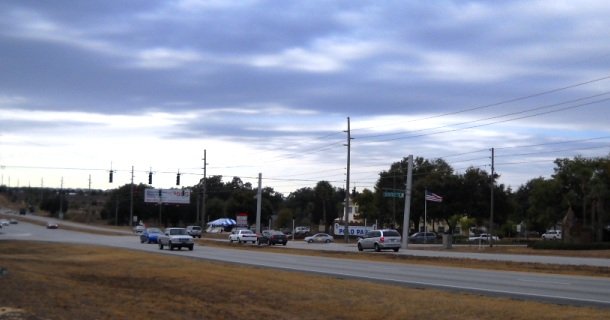 DAVENPORT – A section of Central Florida that grew by leaps and bounds when the housing market was on fire, and has since suffered a high home foreclosure rate, could be in for some welcome financial relief, courtesy of foreign investors.
The British have long had a love affair with Northeast Polk County and the Four Corners area where U.S. 192 and U.S. 27 meet, since the area is close to Walt Disney World and the other theme parks, and has an ample supply of vacation homes.  In fact, the vacation home industry has been booming throughout Northeast Polk County for the past decade.
But the growth of residential subdivisions along U.S. 27 in the first half of the last decade, which wiped out so many vacant citrus groves to make way for new housing units, turned into a nightmare for local Realtors when the housing boom crashed in 2008.  It left the region with a high inventory of newly built, unsold homes, and a rising foreclosure rate.

A lot of that inventory, which has been slow to clear the market, could soon get cleared off the books altogether, said L. Scott Brown, a partner and licensed title agent with Orlando Title Services in Orlando.  He said a group of British investors have contacted him about their interest in chartering a new company that would purchase a lot of unsold vacation home properties along U.S. 27, at a time when too much competition has brought the prices down from the historic highs in 2005-2006.
The new corporation, Brown said, would be set up on the islands of Guernsey, which lie in the bay of St. Malo in the English Channel, about 30 miles from the north coast of France and 70 miles from the south coast of England.  Guernsey is a tax free island, and offers British business owners the equivalent of setting up an American company in the Bahamas.
“All the guys are British,” Brown said.  “There’s an IPO (Initial Public Offering) that’s supposed to be released in the United Kingdom for the sale of hundreds of vacation homes in the (U.S.) 27 corridor. These will be homes that have been foreclosed on.”
The Four Corners area – where the counties of Lake, Orange, Osceola and Polk counties meet – already has a growing number of British pubs and restaurants, and a lot of the vacation homes there are run by property managers who relocated here from Britain to get in on this booming industry.  The short term rental home initially had its strongest market among the British and other Europeans, who came to the region for extended stays of a month or longer, and wanted to rent a fully furnished house for their families.  These home provide multiple bedrooms, a kitchen, game room and private pool — much more space than a hotel or motel room.  Even as the local housing market has floundered, there continues to be interest among foreign nationals in purchasing second homes here.

“There’s a lot of Canadians coming down and buying homes in the $100,000 range,” said Paul Dudley, who moved to Four Corners from England to run a local business, Florida Villa Services Inc., who sells game room equipment to residential and vacation home properties in the area.  “For that price, it’s all condos and townhouses.”
The second home and vacation home industries have dominated the Four Corners real estate market in the past decade, but it’s been a struggle in the past two years once the housing market collapsed.  Nevertheless, Brown said the British investors see an ideal opportunity to buy up new vacation homes at low prices, and then look for a healthy return on that investment as the market improves.
“They’re going to come in and buy up 6 percent of the vacation homes in Central Florida,” said Brown.  “They’ve contacted a couple of banks that have a huge portfolio of foreclosed homes. We’re going to know in the next two weeks if that will fly, but if it all flies, it will be great because it will remove a lot of dead inventory off the market.”

Brown said the investors are looking at managing the properties for several years, then selling them.
“That can be a very exciting thing,” he said.
Pete Howlett, a Four Corners Realtor who runs Orlando Vacation Realty in Davenport, said clearing excess inventory off the list of unsold homes would help enormously in stabilizing the Four Corners real estate market.
“This market needs something like that to get rid of all the dead inventory,” Howlett said.  “Then we’ll see some return of prices when we get rid of all that dead wood.”
Brown said some local subdivisions are already seeing the inventory of homes for sale fall below 5 percent, which he said could soon put sellers in the driver’s seat once again.
“I’m seeing that in communities where the value has held up well,” he said.  “You’re seeing low inventories there, and with low inventory, it’s not long before it flips and becomes a seller’s market again.”

Maintaining your property should be one less thing you need to worry about and with Orlando property management this can be possible! Orlando Property Management

Eating healthy for just $40 a week? The federal government says no, but The Tea Party counters that.
Redistricting could mean one thing: the triumphant return of Alan Grayson.

Virtual Reality is the new,…