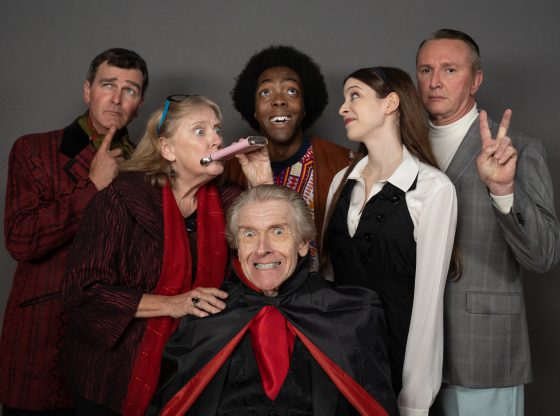 ORLANDO — Caroline is one lucky young lady. Not sure of what she wants to do in life, she takes an aptitude test (copying answers from two students sitting next to her) and discovers she’s slated to become a method actress. Her fortunes really soar when she lands a choice acting gig on Black Wood, only the hottest daytime soap on television, about a town in Connecticut besieged by vampires, werewolves, witches, and hammy acting.

Next thing you know, Caroline has arrived in California to begin rehearsals for her new role as Virginia, the attractive young woman who catches the eye of local vampire Victor in the show.

Black Wood, writer Steve Schneider’s ode to the 1960s hit soap Dark Shadows, is a comedy you can enjoy even if you’re far too young to remember much about Dark Shadows (save, perhaps, for the Tim Burton movie version with Johnny Depp.) And if you’re old enough to remember the show, chances are you’ll really enjoy this one.

What is Black Wood all About?

The hour-long play at the Orlando International Fringe Theatre Festival, is essentially divided into two parts: the morning rehearsal where the cast review the day’s script, and the afternoon session where they go live and hope nothing goes wrong (take a guess about how that turns out). Caroline arrives to meet her co-stars, including the snippy Roger, the dotty Peter, and method actress Jane, who is devoted to doing “serious” work, even if it is on a show about vampires and ghouls.

David, the show’s gregarious producer, tries to keep everyone on the same page, while William, a young African-American assistant to the producer, can’t help laughing every time someone mentions how much they love Black Wood. Ahem.

Schneider has a lot of fun providing snappy lines for his cast, and I’ve rarely seen six actors who seem to be having as much fun in their roles as the Black Wood cast. And while the early script rehearsal is enjoyable, the live broadcast is a hoot, particularly since the aging Peter, playing the show’s vampire, is at that age when he struggles to remember his lines — not exactly the ideal situation for live TV. The moment when Roger and Jane, in character as Eric and Eleanor, try to correct a whopper of a line flub by Victor, is one of the show’s funniest moments.

How Is The Cast?

Holland Hayes is fun as the producer, and since the play is set in California in the late 1960s, he makes some funny comments about how ludicrous it is that the state’s very right-wing governor, former actor Ronald Reagan, is thinking about running for president — an idea that David thinks is a complete joke (Oops.)

Shami McCormick is funny as the actress who started doing classic comedies by Noel Coward and Oscar Wilde, but gave it up for serious acting — even if “serious” is, well, a challenge in a vampire soap; and Melanie Leon shines as the sweet, wide-eyed young actress who transforms into an entirely different character on TV. James Honey as Roger and Hannibal Callens as William also have their funny moments.

But the real treat here is J.D. Sutton, perhaps best known to Fringe audiences for his majestic role as Thomas Jefferson in the 2016 show “Thomas Jefferson: My Master, My Slave, My Friend.” He has an absolutely glorious time as the dim-witted Peter, and boy should J.D. keep an eye out for those comedy scripts in the future.

All in all, ideal fun for an event like the Fringe Festival.

Black Wood is being presented in the Gold Venue inside the Orlando Museum of Art. Upcoming shows are at:

Tickets are $12 (Fringe buttons are required for entry). All seats at Wednesday’s show are just $6.

Tickets are now on sale at Orlando Fringe.

For updates about the play, visit their Facebook page.

To order merchandise, advertise with the show or donate to the production, visit Black Wood.