On June 24, the Sheriff’s Office’s Agricultural Crimes detectives arrested Dashong Bonner, 52, on two counts of felony animal cruelty and one count of misdemeanor animal cruelty following an investigation into her treatment of several dogs at her home.

“When Animal Control and Ag deputies arrived at 490 9th Avenue in Bartow, they found one dog deceased, and two dogs severely neglected and emaciated.” noted Carrie Horstman, public information officer for the Polk County Sheriff’s Office, in her report on the case.

Bonner was booked into the Polk County Jail and is being held on $2,500 bond, which amounts to $1,000 for each felony charge and $500 for the misdemeanor.

Polk County Sheriff Grady Judd said this was a shocking case of how much cruelty can be inflicted on animals.

“Our Ag Crimes detectives and Animal Control personnel have seen some pretty awful things, but this is the worst case of animal cruelty they’ve encountered in a very long time,” Judd said. “These dedicated men and women are working around the clock restoring health to these two severely neglected dogs. It’s a shame we didn’t get there in time to save them all. We appreciate the anonymous citizen who saw something, and said something.”

What Did the AG Crimes Detectives Find? 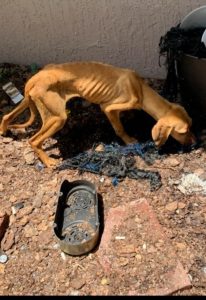 As Horstman noted, the report on the arrest was graphic and disturbing. It read:

“Dog #1, a brown in color female Pit Bull Terrier named Mocha, was located in a wire kennel with no plastic floor, covered in feces, with a 1/2 eaten plastic dog food bag in the kennel. In the bottom of the kennel were pieces of plastic the dog had digested and passed with its feces. The dog could barely stand and was carried to the animal control transport vehicle at the scene. Upon an evaluation of the dog by the Polk County Animal Control Veterinarian the dog was found to have a body score of a 1, with 1 being completely emaciated and 9 being obese. The dog was found to be suffering from heart worms and hook worms, anemic, severely underweight, and weighing only 24.1 pounds at approximately 5 years of age. This dog suffered repeated pain trying to stay alive eating a plastic dog food bag. The dog was unable to escape the wire kennel and attempt to hunt for food or water. 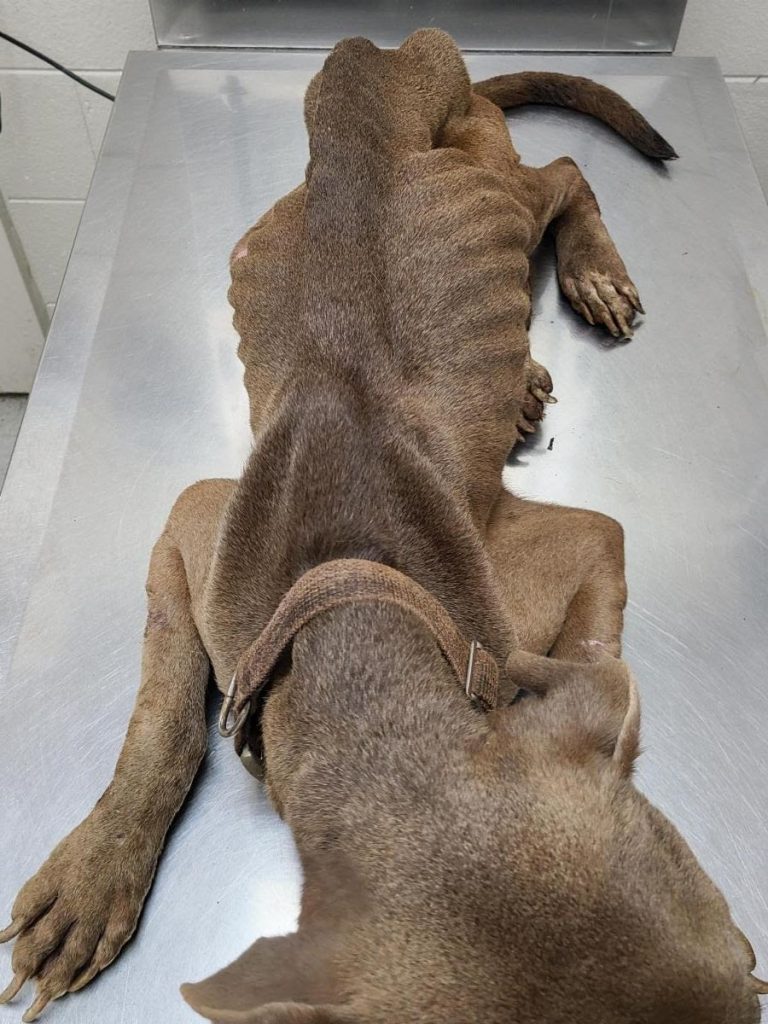 “Dog #2, a tan Cur mix female dog named Caramel, was located roaming in the yard of the residence. The dog was severally underweight and was picked up and carried to the animal control transport vehicle at the scene. Upon an evaluation of the dog by the Polk County Animal Control Veterinarian the dog was found to have a body score of a 2. The dog weighed 22 pounds and was determined to be approximately 1 year old. The dog was found to be suffering from hook worms, whip worms, and heart worms. The dog was denied proper food and water or proper care.

Dog #3, a tan Cur mix male dog named Buster, was located in a wire kennel on the open back porch of the residence. The dog was found to be deceased. The dog was removed from the property and taken to Animal Control where it was found to have a body score of a 1. The dog had no visible fat on its body and appeared to be skin and bones. The dog clearly suffered a cruel death by starving to death inside a wire kennel with no food or water, and no way to escape to hunt for food or water. The floor of the kennel had one small piece of very dry feces in it indicating the dog had not had any food over an extended period of time.”

Horstman reported that Bonner surrendered ownership of the dogs to detectives, and told them she had been given the dogs by her ex-husband.

Bonner also stated that she didn’t know that one of the dogs was dead in its kennel and when asked if she could smell the odor of dog feces, “She stated she was not home much and did not smell it,” Horstman noted.

In Florida, the penalties for animal cruelty can include one year in prison and a maximum fine of $5,000. The law in Florida also states that if there are “aggravating factors” in the case, it could result in a sentence of 5 years in prison and a $10,000 fine.

Florida law makes it clear that anyone caught harming an animal in this state will face criminal charges.

Love, Always Caps Off the Florida Festival Of New Musicals
The Book Of Merman Unites Ethel, Mormons, and Great Fun