At Orlando Health, Growth Mirrors the History of Central Florida 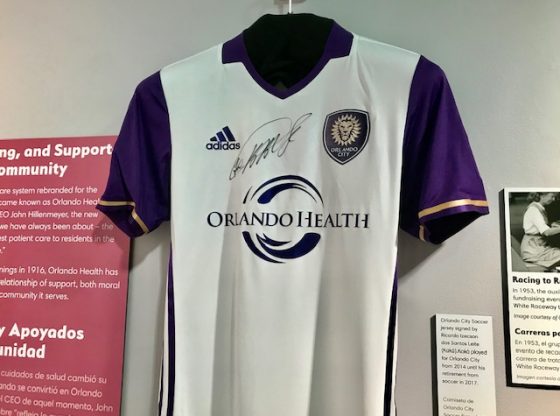 ORLANDO — As Florida’s population has boomed and thousands of newcomers relocate to the Sunshine State each year, health care institutions have either dramatically expanded or been created from scratch in the past decade to meet the needs of a fast-growing state.

One of Orlando’s oldest health care institutions, Orlando Health, has a particularly lengthy history in Central Florida, dating all the back way to World War I. And a lot of that history, from its policies during the era of Jim Crow and racial segregation, to the impact that the opening of Walt Disney World had on the hospital, mirrors the history of Central Florida as well.

That striking history is now on display at the Orange County Regional History Center in downtown Orlando in an exhibit titled “Orlando Health: 100 Years of Caring,” which covers six rooms on the museum’s second floor.

And while the exhibit focuses on its sponsor, the hospital in South Downtown Orlando, it also highlights how the South has changed over the last century, starting when Orlando was a sleepy backwater showing early signs of growth to the era of segregation, to the changes brought by Disney — and even to one of Orlando’s most painful moments, the Pulse massacre in 2016.

As the center of healing and medicine in a city that has changed so dramatically, Orlando Health became something of an eyewitness to the city’s evolution.

What is the Orlando Health Exhibit About?

“Healthcare in the early 20th century struggled to keep pace with Central Florida’s booming population …” begins the liner notes for this exhibit. And as the exhibit points out, the response to that came from a group of local physicians who decided to raise money to build a hospital to care for the area’s growing population, which would open in 1918 as Orange General Hospital.

The building that often had operating rooms lit by candlelight in those early days would evolve into Orlando Health. Because despite the fact that Orlando today has more than 277,000 residents and more than a million people living in the metro area, in the 1910s a hospital was something the city still needed.

“At the end of the 19th century, Orlando’s sparse population had few medical facilities,” the exhibit notes.

Having raised money for a hospital, construction started in April 1917, but a host of factors — the start of World War I, a citrus freeze, and even a railroad strike — put the project on hold. And, in no small irony, the final grand opening in April 1918 also got delayed by a few days, this time by the outbreak of a Spanish influenza epidemic.

It would become a teaching hospital as well, opening with separate wards for men and women.

But that wasn’t the only thing separating the patients.

What Were the Hospital’s Policies During the Jim Crow Era?

The exhibit doesn’t shy away from the South’s racist past, and has a room devoted to memorabilia and photos from the days of Jim Crow laws. Segregation was enforced at this hospital as well as in the community at large, the exhibition notes.

“Orange General accepted all patients, but like most other healthcare facilities, they had a colored ward to keep African Americans separate from white patients,” the liner notes state. “Located in the basement, boiler pipes were visible on the ceiling.”

The exhibit even recalls one particularly ugly policy: black residents could not rely on ambulance service in the event of a medical emergency. That fact was painfully emphasized through the hospital’s reaction to one of Greater Orlando’s worst incidents from the Civil Rights era.

“In late 1951, Central Florida came to national attention when pioneer civil rights activists Harry and Harriette Moore were killed by a bomb placed under their home in Mims, Florida,” the liner notes state.

At the time, ambulances refused to transport black patients, and Harry Moore died in his brother-in-law’s car while being rushed to the closest hospital that would treat him.

The hospital remained segregated until the 1960s, when passage of the 1964 Civil Rights Act by Congress ended segregation laws.

What Other Aspects Of History Does The Exhibit Cover?

Quite a bit of local, national and medical history is covered in this exhibit, charting how Orlando Health was impacted by the Great Depression and World War II, and the advances in treatments, from the introduction of dialysis machines and anesthesiology to changes in care through robotics. Orlando Health performed its first open heart surgery on Feb. 28 1964 on Lura Farmer, a 39-year-old Titusville woman born with a heart condition.

And where would the history of Orlando be without a mention of Disney and its impact on the region. Built in the 1960s, Walt Disney World opened Oct. 1 1971 with a single theme park, the Magic Kingdom, and three resorts.

“When Disney opened, it welcomed a huge number of tourists and staff, dramatically expanding the population of South Orlando,” the liner notes state. “In response, Disney donated part of its property for a hospital — Orange Vista — and worked with Orange Memorial (Orlando Health) to build and operate it — the first Orlando Health expansion outside South Downtown Orlando.”

The exhibit also looks at how Orlando Health responded on the night of June 12 2016, after Omar Mateen, a 29-year-old security guard, shot and killed 49 people and wounded 53 others in a terrorist attack inside Pulse, a gay nightclub in South Downtown Orlando close to Orlando Health.

“With 68 injured that morning, dozens of patients flooded the Orlando Regional Medical Center, its doctors and staff responding to save the lives of as many as they could,” the liner notes state.

Anyone interested in medical care, a career in medicine or nursing, the nation’s ongoing health care debate, the history of Orlando and Central Florida, and even history in general, should find more than a few aspects of this exhibition to be quite fascinating and enlightening. As the exhibit notes, “Orlando Health has grown with the community as it celebrates 100 years of service.”

Holiday Fire Safety Promoted After Mattress Fire in a Camper
The Weighty Question for 2019: What To Do About Social Media