Animatronicans: Under New Management Returning to Orlando Fringe in May

Home /Interviews/Animatronicans: Under New Management Returning to Orlando Fringe in May 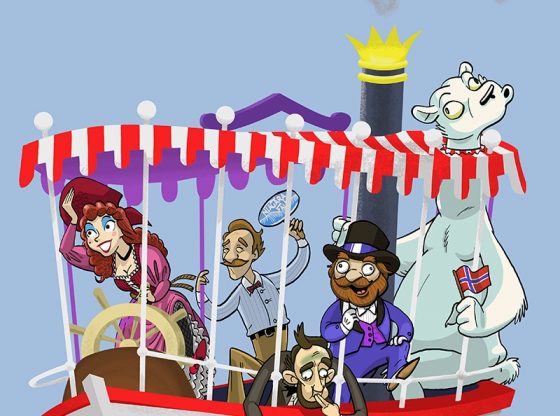 ORLANDO – In 2016, The Orlando International Fringe Theatre Festival had a hit on its hands with the Best Comedy Award Winner The Animatronicans, which offered a comical and loving salute to Orlando’s famous theme park world.

Now the cast of that 2016 show will be returning to Fringe next month to again bring us Animatronicans — only this time, it’s a new show.

Animatronicans: Under New Management, written by Jeff Jones, revisits the original’s cast of animatronic characters from area theme park attractions, gathered in a show where the format resembles a TV sitcom.

As Jeff noted, “In this installment of our series, their out-of-the-theme parks lifestyle is turned upside down when a decision from company management assigns the recently unemployed red head from the Pirates of the Caribbean to be their new roommate.”

At the same time, some of their human friends have their own problems, including theme park employee Charlie (Brett Waldon) and the overly friendly neighbor Susan (Janine Klein).

“Many other surprises and character cameos are in store for die hard and casual theme park fans in this stand-alone sitcom spoof,” Jeff noted. This production will be directed by Fringe veteran Michael Wanzie. The two playwrights had joined together for the original Animatronicans.

Jeff talked with Freeline Media about his production.

What is Jeff Jones Doing Differently This Year?

Freeline Media: It sounds like you’re turning Animatronican into a franchise.

Jeff Jones: That was never the intention. I didn’t want to do a sequel to the original, which has grown its popularity over the last few years. I had to approach doing another one as simply the next episode. The benefit of writing the show as a sitcom makes it easier to just simply make it the next installment without having to write it as a sequel that carries over from the first one.

FM: Where do you look for inspiration as you create the next installment?

Jeff: I always look at what is happening in the theme park world when it comes to large changes, deletions and additions to attractions. That world is always changing, so it gives me plenty of material to work on.

FM: Interesting that Abe Lincoln remains a recurrent character. Tell us about that.

Jeff: That figure was one of real modern marvels when it comes to animatronics. Disney imagineering created a figure that was so lifelike for the time people had no idea it wasn’t real. Plus Josh Siniscalco is just so good at playing the character.

FM: Why do you think show clicks with Fringe audiences?

Jeff: I think because it’s just mindless fun. Everyone has a little bit of theme park geek in them. If it’s not the current offerings in the parks, there’s the nostalgia as well. We have fans of all ages, even some that aren’t even old enough to have experienced the original Journey Into Imagination ride that the Dreamfinder character was part of. Thank goodness for YouTube. There are hours and hours of video footage and history of just about every theme park attraction.

FM: How do you like collaborating with theater veteran Michael Wanzie?

Jeff: Wanzie is the perfect director for this project. As a kid he actually attended the 1964 World’s Fair and experience Mr. Lincoln and the Carousel of Progress in person. He’s a bigger Disney history nut than I am and the material is right up his alley. He gets what I am going for and know how to get every little laugh and comedic moment from the words I put on the stage. The entire cast of this show is perfection when it comes to comedic timing as well.

Animatronicans: Under New Management is being presented at the Gold Venue at the Orlando Museum of Art on the following dates:

Admission is $12, plus the Fringe Button. Tickets available now at Orlando Fringe or Animatronicans