A Tale Of Two Cities The Musical Is As Sprawling, Epic as the Book

Home /Reviews/A Tale Of Two Cities The Musical Is As Sprawling, Epic as the Book 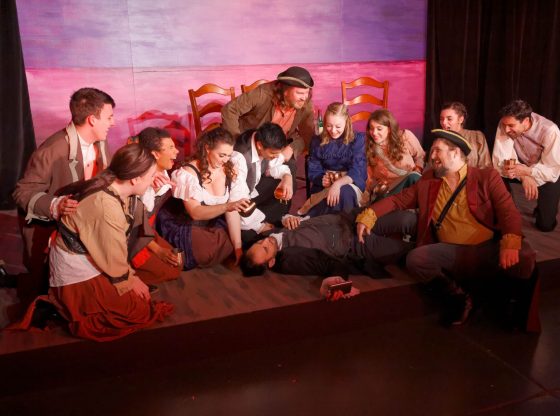 (Editor’s Note: This review is part of a new digital content space within Freeline Media to be known as Orlando Entertains. Think of it as a site within a site, focused on all forms of entertainment created by and for Orlandoans. There will be interVIEWS, preVIEWS, reVIEWS…all the VIEWS. It will serve to give more and expanded coverage to the creators that help our arts scene thrive. Stay tuned as this site grows from digital written content to also include audio and video coverage, perhaps sometimes even live! And we want feedback from YOU in comments to guide us on the way. Here we go!)

COLLEGE PARK — “Go big or go home” is not a phrase usually associated with local community theater productions. But, it is definitely the phrase to use for Central Florida Vocal Arts’ production of A Tale Of Two Cities, The Musical. And while the results are sometimes hit or miss, the production deserves a bravo for the undertaking, and the cast and crew supersede the material.

How Does The Book Translate as a Musical?

The tale on stage is as sprawling and epic as it is on the pages of the classic novel from Charles Dickens. And while there are the requisite musical theater “big moment” songs, comic relief and dance numbers, Jill Santoriello’s book, music and lyrics are problematic.

There are some rather rough transitions in time and place, some short shrifting of storylines that were much more spelled out in the source material, plot contrivances that stretch the imagination and an ending that feels incredibly rushed, as if the overlong first act sapped her energy to the point where the second act became a “let’s hurry up and finish” exercise.

Material aside, the performers bring boundless energy and terrific vocals to the stage. Nishaa Carson does a superb job as musical director in blending voices to deliver wonderful harmonies and stand out moments for her leads, even if she is often working against a sound system and tracks that sometimes hurt more than they help.

The direction from Michael John Foster, while making some good choices in use of space and audience participation, misses the mark in terms of on stage blocking for sight lines and creating an atmosphere where actors seem at times to be performing in different shows that sometimes dove tail. Additionally, the accents are uneven, and half way through I wished they had just been disposed of entirely.

But despite some of this ying and yang, what saves the production and makes it worthy of a supportive audience are the performances, a few stand outs in particular. Gavin Waid, under a ton of aging make-up, is always believable and often powerful as the tortured Dr. Alexandre Manette.

Anay Philips as Little Lucie holds her own against seasoned adult performers and takes a role that could easily become cloying or annoying, and infuses it with sincerity, a sense of innocence and strong vocals.

Kenneth Nisbett, as Ernest Defarge, is a force to be reckoned with on stage, both vocally and otherwise. Linsey Duca as Lucy Manette has an amazing voice and an authenticity often lacking in musical theater characterizations.

But the true star of this production, one who at times threatens to run away with the entire nearly 3 hour endeavor, is David Bracamonte as Sydney Carton. Granted, his character, both in the show and the novel, travels the longest path of change and redemption, but Bracamonte absolutely slays the role. There is not one false moment or note as he goes from a somewhat loveable drunken cad of a lawyer to smitten hopeful suitor to possible savior figure.

Through it all, Bracamonte brings an earnestness, a subtle sense of humor, a heartbreaking hope for love and a surprising heroic turn without ever having it be anything but 100% believable. And vocally, he shows amazing control between the big powerhouse moments and the softer, subtler sequences, while always moving seamlessly from dialogue to lyric and back again. He is worth your ticket price alone.

A Tale of Two Cities, The Musical is an ambitious project from an accomplished group and well worth your support. I, for one, can’t wait to see what comes next from Central Florida Vocal Arts.

“A Tale of Two Cities The Musical” is being performed at the CFCArts Theater in the spacious auditorium inside the Central Christian Church, 250 SW Ivanhoe Boulevard, in College Park. There are upcoming performances on Friday, Feb. 8 and Saturday, Feb. 9 at 7:30 p.m. The show runs for 3 hours with a 15 minute intermission.

Tickets are $25 for VIP Reserved Seats, $22 for general admission, and $11 for Half Priced Student Tickets. To order tickets, visit the CFCARTS website.